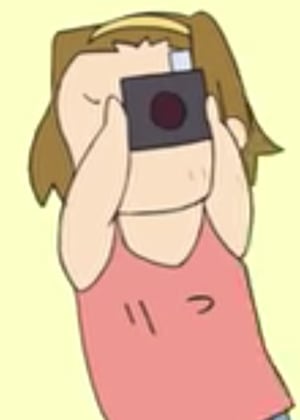 Since the series got better in the second season I thought I'd give these little shows a try again and see if anything changed for the better, and it did, slightly.

This time around, though still split into three one minute segments, the stories had a more consistent flow, not just one terrible joke repeated in basically the same way in each segment. There was an episode where they made a play based on their songs, reminisced about childhood memories, created their favorite meals and one where the girls replaced the characters in fables.

Some how the animation became worse with this new batch of shows. The drawings are a bit cruder and sloppier than before. Whenever they show Ms.Yamanaka she looks like a cream colored version of the Grimace and not a human, while at times Yui resembles a Cthulhu/human hybrid.

The sound was exact to the original in pretty much every way, so nothing changes on that front.

Again there really was no character info that would add to the series, but the whole point of these are just silly little extras. I guess we learned some useless things, but nothing that would impact the series.

While not much changed from Ura On! the slight difference in the way the little stories were put together helped out a bit. They still don't add much to the series, but they were somewhat watchable this time.