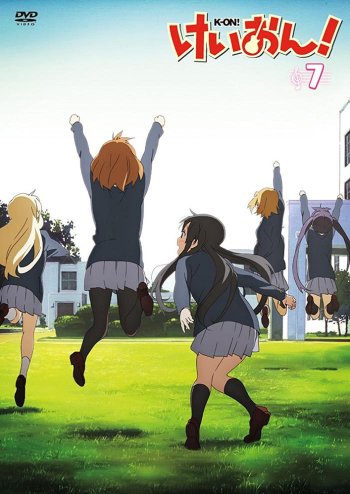 K-On! Live House is an extra episode to the cutesy slice-of-life anime K-On. I've reviewed this anime as part of the main series since I watched it alongside the main series. It's just one episode, but it's set after the first 12 episodes. Unlike the main series, there is some plot here, it's just the band's first time performing a live professional gig in 1 episode. Check out the main review here. I feel bad for being lazy and not writing a full seperate review but if you must know, I'm feeling very ill right now and I'm grateful for getting one review out, let alone two.

Same as main series, minus the rare reference to weirdness. Check the main review

Additional bands and one of Miss Yamanaka's old band members is the manager of the live house. Otherwise check the main review

The girls get a spot performing live at a live house ouitside of school in front of strangers and with other bands. Their first professional gig. Not much else to be said besides the fact that it's set after season 1 during the end of the girls' second year of high school and the band (first for Azusa). There's a little bit of new years stuff at the end, but it's still the same warm fuzziness.

A nice addition to the end of the series, probably the most serious things get before season 2. If this was a part of the main season then one could argue the plot might just exist and might just be going somewhere. Otherwise more of the same. Same recommendation as the main series, try it if you like cutesy chilled-out slice of life and music, if you like things like Tari Tari and Lucky Star.

Some sites may have this as episode 14. You know this is the episode if they girls are going to perform at an actual concert along with a couple other bands that are dressed up very differently. The flow from episode 13 > this is so natural that you wouldn't even notice.

The episode basically finishes off Season 1 with a bang in a sense, and should be viewed after the other 13 episodes. It is much more music focused which was nice, a great way to "finish" the first season. This episode was as enjoyable to watch as any of the other episodes, possibly even better.

It's New Years Eve and the girls finally get to play a show outside of their school, and for once it's not completely terrible for the viewer.

So I've been generally down on the first season of the series. They crammed two years into 12 episodes and for the most part were completely unrealistic with many things, but with this little OVA they actually got things right.

By getting out of the confined spaces of the school and girl's houses they were able to bring a bit more reality to the series than just your average "school life" anime. This also broke up the over used places we got time and time again in the first season.

Everything seemed spot on when it came to what it's like for a band to play an actual show. The club itself, the people working there and the fans for this type of show all came across as authentic, something the series lacked.

There wasn't a big spectacular plot twist or anything that would shock or blow you away, but just a very good OVA that would have fit as a episode better than many of the actual episodes.

Pretty much the same as the series. During some performances things looked choppy, but most things looked no different. Where a big, and somewhat jarring, change came in was with the other bands. I can see them being drawn to look like they did, as punk girls or a Beastie Boys type hip-hop rock hybrid, but they were drawn in completely different styles than the original cartoon. When three different styles of drawing are combined into one scene (sometimes four different styles) you just lose that small sense of reality you want in whats already a suspended disbelief.

The music was exactly as it was in the series, same opening and closing and same four performance songs.

Again nothing different from the series when it comes to the girls themselves. The new bands and friends were a nice little addition, but nothing to swing the needle either way.

I enjoyed this OVA much more than the first season as a whole. I think they were a bit more true to life with the feeling of being in a band and playing an actual show. They hit on many accurate points and even showed the girls growing a bit, a surprising change when most OVAs tend to be pointless.