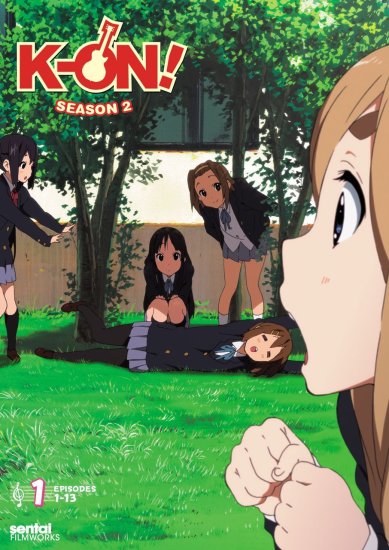 I haven't watched any other music school life anime so this is all new to me.  The story is really basic:  a bunch of high schoolers enjoying their time by relaxing and having some fun with music.  The music aspect does play a lesser part than the previous season though.  However, this season is paced a lot better as the previous one felt rushed to me.  It became more of a school life anime rather than a music anime.

Loved it all.  Really like the character designs.  It's textbook moe.  Normally I haven't really shown any preference but this worked for me.  Plus Yui and Ritsu had nice thick thighs.  Me likey!  Colors are nice as the dark colors work well with the bright.  The underappreciated part is the attention to detail in small intricate movements.  It's always a nice touch you won't notice the first time around but looking back, you always remember how much attention was brought upon that.

One weird thing is that Mio sounded like a young boy but I got over it.  I love all their voices equally.  They all go well with their personality.  Ritsu's voice loud and cheerful.  Mio's voice is quiet, soft, and soothing.  Yui's voice is airy and full of uncertainty.  Mugi's is also soft like Mio's, gets energetic Ritsu's, and dreamy like Yui's.  Azusa's is stern yet so adorable.  This is a music anime so I expect the music to be great.  Opening was kinda annoying because it's like a song on fast forward.  The songs they played were really likeable and very addicting.  Their singing voices are heaven to me!

Something about each character made me love each and every one of them.  Yui is technically the main character but everyone else feels just as special.  Like I said before, there's unlimited charm with each and every character.  Each have shown their strong side and vulnerable side very well without being too much.

The one word that comes to mind about this show is "charming".  There's this impalpable quality that made me just love this show.  Maybe it's the characters, the art style, or some hidden voodoo magic.  All I know is that I just love it!  I knew I loved it when I had a giant ball of feels at the last episode.

Note: the finale is episode 24. Episodes 25 and 26 are ‘extras’, set during the timeline before episodes 23 and 24. I wanted to point this out to future viewers as I didn’t enjoy the realisation that the show was reaching a conclusion as I was watching and earlier than I expected!
Eps 25 and 26 can be viewed chronologically with the rest of the series (after ep 21, before ep 23) but they work well thematically, as a kind of, second ending.

K-On! season 1 covers two years in 13 episodes. Season 2 covers senior year (for Yui, Rin, Mio and Mugi) in 26 episodes. The show uses the increased time to expand its cast and explore its characters, primary and secondary – this is done with some characters better than others but is mostly successful.

With the first season, the focus was on the development of the club and goals of the group as a band and as musicians. In the second season the club is still central but the focus shifts slightly to school life. Each episode has a strong focus and consistently delivers humour and the infectious, enthusiastic K-On tone. Only occasionally dragging, the episodes perhaps vary in quality/enjoyment based on activity or character focus.

The second half of this season takes us through the steps of senior year. The intimidating future of life after high school - separation, growing up - has a gently looming presence over the group of friends, which builds to an affecting conclusion.

K-On detractors may claim the show isn’t really about music. But the reality is that practice is boring and song-writing frustrating, depictions of both are used sparingly. The unpretentious and fierce passion for music felt by the characters and creators is clear and evident through the excellent songs within the show and performed in the opening and closing titles.

Season 2 builds on the enthusiasm and sweetness of season 1 to deliver more of the same and then some.

No spoilers- K-on follows the lives of five high school girls from their enrollment into highschool to their graduation. Coming together through the light music club, the girls become inseparable from their music as well as one another.

What made this anime stand out to me is how intimate the viewers were with the club and its members. We were with them through thick and thin, while they were nervous, excited, and upset. It was all the episodes that deviated from the original plot, such as them shopping or on their school trip, that helped create a total picture of their high school lives. The path of life is never straight, but it’s all the things along the way that define and shape how we approach our goals and ambitions. And when it came time for the girls to perform, their lived experiences and the bonds they made with one another made their music truly shine.

Every episode was so enjoyable and fun that I often got lost in them, not realizing they were done until the end credits rolled. I quite enjoyed the different events that happened during the inbetween episodes. Each was unique, not following the usual filler episode templates. And although these episodes did not always follow the girls’ music career, they helped solidify them as life long friends.

By the end of this anime I was just as taken aback as the girls were that their graduation had finally come. I wanted to hang out and enjoy after school tea with them for so much longer, listening to them plan their next crazy scheme.

K-on is a true masterpiece within the slice of life genre and a must watch for any anime fan.

naoko yamada is an absolute blessing!!!!!!! i'm a HUGE slice of life fan, and i'm surprised at myself how late i watched this. i first watched it blind on the summer of 2020, leading up to my senior year of highschool with my girlfriend. i cried. probably the best thing i watched that year. possibly ever. i have watched a few of yamada's works in the past but this is definitely my favorite. these girls remind me of my high school friends and the experiences i'm having right now. i'm reminded that time as a highschooler is fleeting, yet something to be cherished with those that you love. i couldn't tell you any huge flaws in this story, but that might be because of my rose-colored glasses, but i would likely point too the pacing of the first season as one. obviously this doesn't effect the quality of the anime as a whole and i did find that rushing through all those years only to slow down for the senior year was a very nice touch. this anime is probably my favorite of all time simply because of the timing of when it entered my life. i'm so grateful to k-on for reminding me about how wonderful life is and how appreciative i am of the experiences i have. also, yui x ritsu FOREVER!

The formula stays the same as Season 1, and the same could be said for the entire season in general. The only kind of story you would get here is if you consider the natural progression through a year of high school to be that. That said, there is no need for a story here. The dialogue is as entertaining and funny as you would expect and know based off the first season.
(*Note, episode 25 and 26 should be viewed before 24 if you want the timing to make sense, I would just watch them after though since it brings some laughs after the the inevitable and somewhat sad ending to such a great series).

There are no new characters, but thankfully we have Azu-nyan there from the beginning this time. The band plays a few new songs, but I would say there is less music overall than the first season. The build up towards the last few episodes is sad, but you knew it was coming, and the emotions fit well with what you would expect come graduation.

It is the humor, characters, their dialogue, and how well they fit together as a single group is what makes this so such an enjoyable and memorable anime. The random nature of the episodes also helps and overall, the K-On series makes for a great re-watch or pick-up whenever you need a laugh and a warm feeling.

Will definitely be re-watching this series many times, any additional info can be found in the Season 1 review.