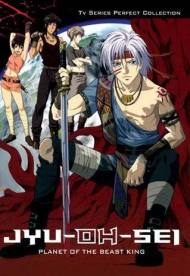 StoryIf you have ever read William Golding's Lord of the Flies, then you'll understand very quickly the classic theme this series is tapping into, namely survival of the fittest at the cost of humanity. However, Jyu Oh Sei swaps English schoolboys for convicts, and sticks and stones for beam-knives. As intense as it sounds, the show fails to reach its full potential; instead of capitalising on that brutal exposure of human nature, the ending falls back on an age old sci-fi cliché. The result is certainly surprising, but disappointing nonetheless. At first it is a fish out of water story, with Thor learning to put aside airy fairy notions for the gritty realities of physical struggle, but then, at the last minute, it changes tack to form an awkward link to the abuses of science. I got the feeling the show had little faith in its own material, dumping the sophisticated stuff in the middle for the typical stuff at the end in an attempt to avoid ‘big', unanswerable questions. Still, because Jyu Oh Sei is only eleven episodes long, it is ultimately difficult to feel cheated. One key achievement of the series is its ability to jump straight into the plot, introducing tragic elements that make a definite impact from the very first episode. Furthermore, Jyu Oh Sei is the kind of show that doesn't believe central characters have any special rights to survival, with the effect that conflicts instantly have a lot at stake. So, the ending aside, what you get overall are exciting set-pieces, brutal action scenes, and an engaging social experiment, all presented with a decent sense of pacing.AnimationBONES should be congratulated on the fantastic concept for Chimera, and I mean this in all senses of the word. From the first few seconds Rai and Thor spend in the jungle, it is difficult not to be taken in by the detail and inventiveness of the plants. Moreover, Chimera's lush but deadly wildlife is a useful contrast to Juno's sterile, metallic environment, with Chimera washed in refreshing greens whilst Juno is cold silver and blues. As an aside, the character designs reminded me of Escaflowne the Movie, which I take to be a BONES influence.SoundJyu Oh Sei has an excellent moody OP and a melodic ED but I'm unsure whether they are worth enjoying as singles in their own right (the rest of the soundtrack is certainly forgettable). Voice acting for almost all characters was suitable, with engaging performances from young Thor, Zagi, and notably Third, whose husky tone really stood out.CharactersThe series instantly gives us a good idea of the differences between Rai and Thor through their first stark experiences. Rai is annoying for no good reason, with whiny lines and a whiny voice. As Thor discovers, it is difficult at times to wish him anything but the worst. However, this allows the show to draw instant sympathy towards the tough and efficient Thor in order to make us care quickly about the events that follow. Unfortunately, the bright and colourful child personality is never developed (in fact, a convenient time jump stops us following his growth) so that Thor becomes bland and generic in adulthood. Later, Rai's annoying traits are easily replaced by Thor's new friend, Tiz, whose constant pleading to be impregnated goes beyond animalistic rationality to just pure stupidity. In fact, not one female character can be said to have any meaningful aims beyond bedding a man. Apparently, when thrown into a state of nature, men want to kill things and women want meaningless romance. Undoubtedly, my favourite character is Third, first and foremost because of his incredible voice, and secondly, because he is the most complex of a simple bunch. A less swashbuckling version of Allen Schezar (Escaflowne), a rogue seemingly incapable of deep emotion who clearly has ulterior motives, he provides for some of the best conflicts. Sadly, his lacklustre evolution is just one of the many casualties of the ending. All things considered, each of the characters has simplistic motivations - Thor wants to become the Beast King so he can survive, Tiz wants his babies because she fancies him, etc. - but frankly, their minimal development is appropriate considering Jyu Oh Sei is such a short tale.OverallMaking straightforward recommendations for this series is difficult, which isn't to say Jyu Oh Sei has any ‘new' ideas, but that it has a unique tone. If that's not enough, then its captivating milieu, action-oriented plot developments, and timeless subject matter should make it a worthwhile series for most anime fans.

I had extremely high hopes for Juuousei after the first couple of episodes. The series efficiently sets up its premise, characters and world in an extremely short amount of time, after which the anime rockets off on an extremely promising storyline. Indeed, the first half of the series is excellent. For one, the characters after episode one are all initially likeable. None of them are particularly deep, but the character designs are excellent and the seiyuu do a good job. More importantly, the pacing of the early episodes is flat out fantastic. Unlike some shows, which half-wittingly bumble through their episodes as they try to introduce everything, Juuousei is extremely good at showing the audience the world while developing the story. Unfortunately, this efficiency ends up being the series’ downfall; put simply, Juuousei’s collapses under the weight of its own ambition. The overarching storyline is so vast and grand that eleven meager episodes can’t possibly do it justice. From the government conspiracies to the wilderness survival stories to the global politics, there’s just far too much to cover. As a result, the writers need to take massive shortcuts across the entire storyline. There’s a three year time jump. Massive plot twists abound, but are so frequent and unrelenting that the viewer never really gets a chance to digest them. The end, especially, suffers from information overload – a sloppy mess of hurried resolution, clumsy tragedy and borderline melodrama. What’s worse, the initially likeable set of characters suffers as much as the storyline, if not more. Supporting characters seem almost blurred by how quickly they rush in and out of view; you’d care for them if only you could see them clearly. On the other hand, the protagonist develops so quickly and randomly that even though he’s in every episode, you don’t really feel like you know him by the end. Tiz, the primary love interest, somewhat escapes this, but certain events make her a largely unsatisfying character anyway. This deficiency is made all the more painful from the fact that this is Juuousei’s only real weakness; everything else in the series is rock solid. Animation is amazingly clean and crisp for what was probably a small budget. As mentioned before the character designs are appealing both before and after the two year time shift, and the action scenes are always serviceable and sometimes even good. Of particular note are the backgrounds of the jungle, which are vibrant and luscious to look at. The sound also compares favorably to shows of its budget. The voice acting is fine with few exceptions, and the background music is competent at setting the mood of the show, albeit somewhat forgettable. Of particular note is the OP, which, using blaring trombones and catchy Engrish, absolutely rocks. Still, an ambitious anime that needed to be longer is certainly better than a safe one that should have been shorter. As so many series pad their running time with meaningless side-stories and tedious flashbacks, Juuousei is notable for being fresh and new the entire way through, even as the pangs of disappointment start to kick in. Even though there have been plenty of other “survival” anime made already, Juuousei never feels trite or clichéd. Overall, Juuousei doesn’t approach some of the other titles released this year, but should provide a satisfying time to those looking for a relatively short shounen flick. 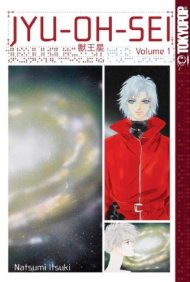