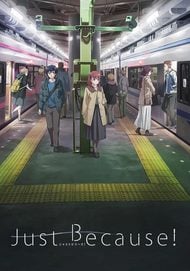 When you combine brilliant storytelling, blooming characters in a simple love pentagon and a normal high school, you get the perfectly woven high school drama bearing subtle romance : Just because.Just because is a rollercoaster of emotions beautifully presented through normal high school students that you can see anywhere. Everything was just so heartwarming to watch, due to the low contrast colours of the animation, chilling BGMs and adorable characters. I personally enjoyed it 10/10, but I'm not going to show any mercy. Story (8/10)The whole anime was beautifully presented, emphasising the characters and their interaction between each other. But, the story, or the base itself was not that special. Its just a normal high school romance, but beautifully told. The drama indeed was perfect, but yet everything was obvious, what happened and whats going to happen. If you are here for a brilliant story of romance ; characters in a complex state, then you wont get it here. It was really a let down, but the presentation itself made this anime not boring. Animation & Sound (7.5/10 & 7.5/10)The animation was kind of, all over the place. The characters faces were flat and chubby, they had different structures from different angles, and their eyes were also poorly animated. But for some weird reason, it suited the anime. Lets think about it. Such calm atmospheric anime with rigid bright characters wouldn't suit much. Also, they almost wore the same clothes for the 12 episodes. Its because the climate in the anime was winter, and they all just wore a sweater upon whatever they are wearing inside. These trivial details had a little impact on my watch, but it might just pass through you if you don't care about those small things.The OP and ED were good, and some details in the OP can give you some hints of what's gonna happen. They also do some slight changes in the OP of the last 5 episodes. The BGMs were ok, and suited the anime pretty well. They used the same BGMs for 11 episodes but used new ones for the last episode. Same goes for the animation, they did good job on the last episode. They really emphasised the last episode didn't they? Characters (9/10)This is the crucial element which in overall makes this anime really good to watch. The whole show was based on what the characters do, and what they are going to do. They were not o boring, the main protagonist actually knew whats going on around him unlike those in some other anime, where the girls just fall in love with him for no ******* reason. Speaking about main protagonist, they concentrate on every characters equally, giving you a Birdseye view of what's going on and how they feel about each other. Well, there are surprises here and there, but you can figure it out if you think about it. Overall (8/10)I personally, REALLY enjoyed this show. Watching the characters study for their college exams motivated me to study too (lol) (I was also on the last year of my school, 2 months away from my final exams when i watched this show). If you like relaxing, slow-paced subtle romance and drama, then you should try this anime. But, if you are experienced, watched a lot of romance shows, then this will just be an average show for you.Well, the whole romance genre is constructed that way. The first romance anime you saw will always be your favourite and it will become a object  of comparison used to compare any other romance anime.

Just Because, for all its intents and purposes, is just nice. Nicely-animated, nicely-voiced, nicely-scored, and maybe nicely-done – but that’s only if we’re talking about the first half. The series gets off to a strong start, where all of the pieces to the love puzzle are set in just the right way. The problem is, things don’t start happening until the midway point – and once they do, they get stalled by the most inconvenient problems, so the pay-off isn’t nearly worth it in the end. For a friend group connected via LINE, the characters here sure suck when it comes to actually communicating. Was this some kind of statement about the way online communication’s affected everyone’s ability to talk face-to-face? In Just Because, people get by with casting meaningful stares at each other and storming off in an angry huff when the other party doesn’t understand what they’re trying to say. And then they still get so surprised by all the miscommunication that happens as a result. By the time the series really begins to hit its stride, you’ll already have a good idea of who’s going to end up with whom. Unfortunately, it’s also at this point the series chooses to slow itself down and wallow in unnecessary conflicts for drama’s sake. The result: you get the ending you may have expected from the beginning, but none of the fulfillment you were hoping for. This could be blamed on the sudden romantic wrinkles the show tried to force on you, but the bigger problem is in the way none of the characters really get developed by the time the series ends. They may have become different people from when we first saw them, but because they don’t really work for what they want after their initial motivations get revealed, they remain stagnant after that first burst of development. Meanwhile, the story seems content with going through the motions as far as romance is concerned, as if it thought that simply willing the desired ending into existence was enough to make us care. Most of the time, feelings blossom out of nowhere and we’re supposed to accept the things that happen just… well, you know, just because. A lot of the problems that happen here could have been solved if the characters just sat down with each other and talked. Talking’s a thing that happens here for sure, but for some reason, the people who really need to do this with each other never get around to it, even when it’s already too late. It’s such a waste too, since this looked like it was going to be a different kind of romance series compared to the other titles in its genre. Instead, it got so caught up in many of the usual genre trope tangles, that it ended up stumbling on its way to the finish line. 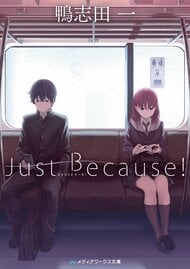