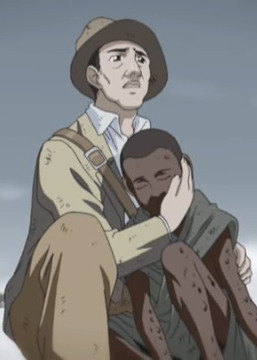 A flawed use of the medium, but a moving and historically important story. Recommended viewing despite the mid-range score, unless you're already familiar with Dr Junod's story.

This educational anime usually airs on NHK World channel in English around the August anniversaries of the atomic bombings of Hiroshima and Nagasaki. It examines the role of the International Red Cross in times of war, and specifically the life of Dr Junod who provided aid to many survivors of the atomic bombings. The writers initially present this story through the eyes of two modern-day schoolgirls who suddenly find themselves to be ghost-like time-travellers, but then relies heavily on narration from Dr Junod's point of view. Unable to interact with any characters, the schoolgirls can only express feelings of shock and sadness throughout. Perhaps this anime was intended for younger viewers who might be able to relate to those characters? I certainly couldn't, though. On the positive side, it sheds light on the difficulties faced by humanitarian missions during wartime while making us aware of its importance. And most crucially, it reminds us of the human cost of warfare, something purposefully hidden from many of us in this modern age.