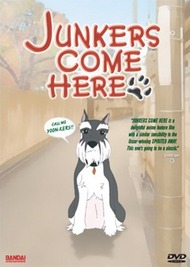 Hiromi Nozawa is a young sixth-grader with a fairly normal life -- and a talking pet dog named Junkers. With her mother at work all hours of the day, and her father constantly overseas, tension in the household is building up quickly, making Hiromi concerned that her parents might not stay together much longer. Luckily, Junkers has the ability to grant three miracles... but are miracles strong enough to save Hiromi's family?

StoryFew people would try to dispute Ghibli’s awesome craftsmanship in anime; the studio has released several animes that easily make it into my top 10 list, and I have yet to see a feature length film by them that wasn’t entertaining. With all of the success that they have enjoyed (Spirited Away is one of Japan’s highest grossing films ever), I’ve always personally wondered why other studios haven’t attempted to imitate Ghiblis undeniably appealing style. The answer could very well lie in Junkers Come Here, a movie that attempts to cover some of the same ground that Ghibli is known for, but oddly falls short. The anime presents a fairly average, elementary school girl, who for the most part engages in various everyday events. However, this normality is soon offset by subtle magic that originates from the girl’s dog, named Junkers (pronounced "Yoonkahs"). If this doesn’t sound like something Ghibli would make, I don’t know what does. However, the movie quickly shows just how talented studio Ghibli is; while Ghibli’s realistic, slice-of-life fare pretty much always feels unforced and incredibly entertaining, Junkers Come Here is at times stale and tiresome. The story is definitely lacking. Several times while I watched this movie I was either yawning or (accurately) predicting what would happen next. Oftentimes the movie drifts into some downright hackneyed segments; at one point, a character in large, exaggerated sunglasses follows a person around town in a sneaky fashion (who hasn’t seen this somewhere else?), and the entire story revolves around the timeless plot device of wish-granting, which the anime handles in a rather clichéd fashion.AnimationThe animation is quite nice. Backgrounds are definitely the best part, and carry a watercolor look that hosts a good deal of visual appeal. Character designs are realistic, and blend well into the animes down-to-earth look. As far as movement and detail goes, the film doesnt quite approach the level found in Ghiblis works, but is definitely good.SoundFor sound, I thought that the generally weak voice acting and flat out bad music somewhat detracted from the anime, but not terribly so.CharactersCharacter-wise, Junkers himself pretty much steals the show. I laughed out loud when Junkers turned on a portable TV and started to watch it, and I smiled when the schnauzer pulled out a drawer of a desk so that he could stand atop it to see what the protagonist was doing. In general, he’s quite a loveable individual. Unfortunately, aside from Junkers, I didnt really like any of the other characters in the show. None of them ever felt lifelike, and I just didn’t relate to any of their thought processes. In particular, I disliked the house’s maid, a frumpy individual who lusts after young men. Characters are usually the strong point in animes like this one, but for whatever reason they're uninspired here.OverallIn the end, Junkers Come Here isnt a completely lost effort; it has moments of excellence, and I enjoyed many individual parts of the show. However, as a whole, I just didnt come away very satisfied. Id recommend this to people who really enjoy the kind of easy-going realism found in shows like NieA Under 7, Yokohama Kaidashi Kikou, or the beginning episodes of Read or Die TV, but most will probably want to skip this one.

Junkers Come Here is a slice of life/drama following 11 year-old Hiromi and her dog Junkers. Although this movie isn't the best written, it has a certain charm to it.  Plot: Hiromi feels like everyone is moving away from her. Her tutor who she has a crush on plans to get married and her parents are going to get divorced. She acts unbothered but she is obviously upset about whats happening around her. Junkers is a talking dog who is like a friend to Hiromi and he comforts her when she is sad. After Hiromi tells him about what's going on, Junkers claims he can grant her three wishes. She wishes that her tutor could stay and not get married but when the wish is granted, she regrets it seeing how she tore two people close to her apart. Hiromi then wishes for her family to be together in one place again. Junkers brings them to the last place they were together and Hiromi tells her parents how she really feels about the divorce. The parents think it's a dream but they think it's a sign that they should stay together. Ultimately, the family ends up together and after Hiromi's three wishes are granted, Junkers can no longer talk to her.  Animation: The animation feels a little choppy in some places b overall I like it. It has a children's picture book feel to it, especially in the backgrounds. It felt really fitting for a story about a child and her magical talking dog. Sound: Voice acting was okay, it doesn't really bother me since Japanese isn't my first language. I loved the song they played while Junkers was flying through the sky with Hiromi. Characters: Junkers is the best character which makes sense because he is basically the main character. His name is in the freaking title. Hiromi is an average 11 year-old but I liked her character despite her whining and complaining. The rest of the characters were kind of bland but still felt real enough for me to care about the story.  Overall, this was a pretty cute film with an average story to tell. It's one of my favorite anime movies because Junkers is a schnauzer and I have a soft spot for schnauzers. I'd recommend this if you like relaxing anime or if you like dogs and cute anime. 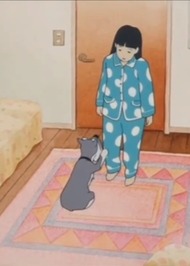 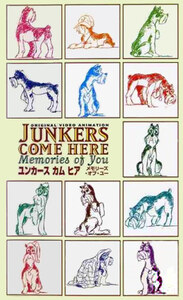 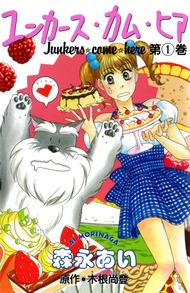