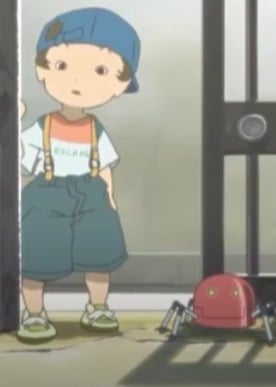 Time of Eve and Junk Town look at a futuristic world of robots in a quiet, pleasing way. Time of Eve is definitely more thoughtful while Junk Town is more whimsical, but fans of one should absolutely try out the other. 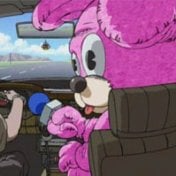 Both Junk Town and Eve no Jikan take place in worlds where robots have become commonplace, but involve unexpected situations involving those robots. Both anime have moderate levels of realism, and allow themselves a modicum of humour.

In both Junk Town and Kimagure Robot robots go about their activities often oblivious to the concerns of the humans about them. In both anime, the distress of the people is comedic to the audience.

If you like short anime about robots, then you're in luck with both Junk Town and Kimagure Robot. While Kimagure is generally more humourous, if you enjoyed one, it's likely you'll like the other.

One rain-soaked evening, a young girl wanders through the streets and runs across a very curious and unique new friend...

A child and his/her robot - a fun idea by any means. Rain Town explores the more melancholy scenario, while Junk Town is definitely more of a pick me up. Fans of one should at minimum appreciate the other.

While Junk Town is not as gloomy, it quickly came to mind when watching Rain Town. Both of these shorts are about children and a robot who follows them. If you liked one, I recommend checking out the other.

After being rushed to a flight by her mother at the airport, a young girl loses her most prized possession, a plush toy named Daru. Awakened by the girl's tears, Daru sets forth on a grand adventure to find her, crossing continents, communicating with animals and statues alike, and even making a new caterpillar friend along the way. As time passes, will Daru ever be reunited with his beloved owner?

The stories aren't the same, but both are cute, dialogue-less (for the most part at least) shorts about a child and their experience with an adorable toy. Both have fantastic animation and are heart-warming.

Denno Coil and Junk Town are two lighthearted, very whimsical looks at a futuristic-style world with technology (robots or cyberspace). I greatly preferred Junk Town, but fans of one would definitely at least appreciate the other.

Tekkon Kinkreet and Junk Town have a strikingly similar animation style and character designs; on a less awesome note, they both also have abrupt scene switching, the-end-of-Lord-of-the-Rings-3-style. The plots aren't similar at all, but you'll definitely appreciate the production of one if you liked the other.

The Genius Party short "Shanghai Dragon" and Junk Town are both short, odd, quirky pieces from Studio 4C which riff on the mecha genre just a little bit - Dragon at greater length then Junk Town, but I think someone who liked one should consider the other.

Both of these robo-centric anime are set in a decrepit city, where a robot is just trying to figure out where he belongs. The robots pal around with a young child, seek out other robots, and even have the equivalent of a boss battle. the animation techniques are somewhat different, but the color palet is nearly identical. So, if you liked one, try the other.

When the cost of taking care of the elderly becomes too high, why not invent a robotic, nuclear powered bed that can take care of them for you? Sounds logical, right? The government thought so too! But when they nominate Mr. Takazawa without his approval as the test subject, they underestimated the determination of his nurse Haruko to step up in his defense. After all, what is a dedicated nurse to do when she suddenly sees her name on every computer screen asking for help and the bed with Mr. Takazawa in it actually transforms, gets up and follows her back home?! Add a lot of police, an angry government agency, a bunch of elderly over-sexed hackers and a trip to the beach and the mayhem is complete!

Both of these anime are about ever-expanding robots that are far more than meets the eye. One is meant to be a hospice bed, the other starts off as only a head. But throughout the anime, they grow stronger under the watchful eye of a human companion.

This is the story of the mysterious creature Nulu-chan, and the boy who Nulu-chan keeps following around.

Both of these follow the strange relationship between a child and a creature/robot. Both are super adorable. <3