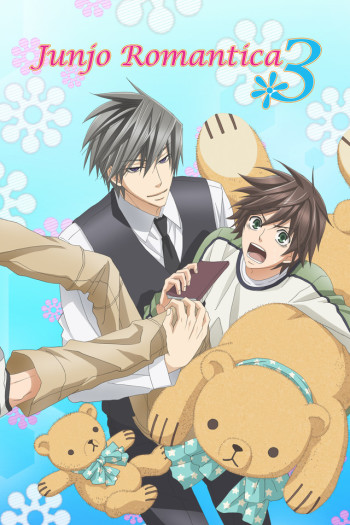 I love this anime and Sekai-ichi Hatsukoi: World's Greatest First Love which are obviously very similar BUT I really wish there were separate animes for each couple!! My main complaint is that it skips around with each different couple so much it seems like some of the story gets lost because of it but I still love it! I've watched each of the seasons so far and I love them all! I hope they come out with more seasons!! All of the couples are amazing in their own way!!! It makes you wish you could find loves like these IRL. Truly heartfelt yet very sensual ♥️❤️♥️❤️

I really enjoy this story, it's shame they have the other side couples mixed in with Misaki and Usagi, though they are the main couple I feel the other two have potential to carry a anime on their own. Misaki, is still even after 3 years, embarrassed about how he feels about Usagi and still often rejects his advances by this stage, it's getting a bit old. It's blatantly obvious that he is in love but his age and immaturity shines through. His naivety is another very frustrating trait he has as well. That being said I do like him but wish he was a bit more forward with his feelings.

My favourite is the Junjo Egoist couple, most seem to find them boring. Perhaps, this is because they are, in my view, the most realistic of the three. Their biggest issue is communication and that is a very relevant problem for a lot of couples both gay and straight. Hiro is very relatable, with his insecurities, inability to express his feelings and worrying about the age gap (five years, the smallest of the three) as they both at completely different stages of their lives. I personally wouldn't have minded them having more screen time.

junjo Terriost has the most likeable Uke, I absolutely adore Shinobu, he's a darling and he doesn't have any issues expressing his feelings for Miyagi (unlike Misaki, who constantly grapples with his very obvious feelings for Usagi and Hiro who is very insecure).  They have an enormous age gap of 17 years, while this is questionable as Shinobu is still in high school, he is 18 which in some places makes him a legal adult and Miyagi is quite an immature 35 year old, by this season they have one of the best episodes together and I just find myself rooting for them.

Perhaps, this is to do with Japanese culture and custom but all three of these relationships are kept mostly secret and whenever, they are questioned about it the Uke in particular are quick to dismiss it immediately. "We are both guys" is something that is littered throughout. All in all, I very much enjoy this anime and would recommend it.

The quality improved a lot compared to its two predecessors that's prolly why this one is more enjoyable than the other two.

As for the story it's the same old recipe with contrived moments to ignite Akihiko's jealousy and spurred him into saying more "suki desu" lines to Misaki, whose tsundereness still hasn't been cured yet after several years of lovemaking with Akihiko. AND this time a new rival not within the Usami family tree appears to chase after Misaki, making him an all-around uke love magnet that's not just exclusive to the Usami folks.

The side couples only get 1-2 episodes each, with the Junjo Egoist team (Hiroki+Nowaki) being the most realistic out of all the couples (at least it is compared to the others).

Since it's yaoi, it's steeped in predictable elements: dragged out storyline caused by misunderstandings and overthinking, that useless "how could a man love another man" statement, using Misaki as a means to get closer to the other crush, possessive seme/uke, clueless uke, and fellas diagnosed with recurring tsundere syndrome (i.e. Hiroki, Misaki, & latest addition Mizuki). Nevertheless it still fares pretty well against other romcoms within its sphere, besides, the comedic moments pardon the aforementioned flaws and keep the story afloat.

NO SPOILERS - It's weird, but I feel like this season is better than season 2! The quality has improved a lot. The plot will offer you (as it is normal for Junjou romantica) lots of funny, dramatic and "ticklish" scenes. The main characters are going through smaller but also larger changes. The overall impression of the third season of this yaoi anime is good, 'cause it fulfilled my expectations.

I recommend only seeing to fans of Junjou romantica who saw the first season. Although, it has to be said, don't expect any big relationship development. The story will unfold in a similar style as before.

continuation and worth the watch