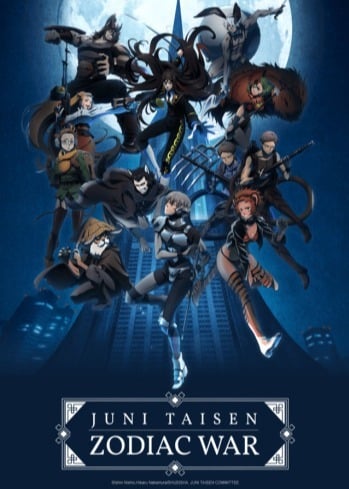 Warrior of the Ram, Hitsujii, is a legendary warrior and previous winner of the 9th Juni Taisen. He was an arms merchant who also made his name on the battlefield, but at the time, his one wish was to see his grandchild's face. In this new Taisen, Hitsujii ranks the other warriors by their ability and plots a scheme using the poison Juseki crystal, which he somehow managed not to swallow.

Even Boars May Become Pigs After Seven Generations

Tricks Both Mongrel and Fowl

Cutting a Chicken with a Beef Cleaver

The Enemy, a Noble Primate

A Wolf in Sheep's Clothing

Even a Champion Racehorse May Stumble

The Man Who Chases Two Rabbits Catches Neither

A Tiger May Die, But It Leaves Its Skin

To Treat a Man to Beef From His Own Cow

The One Wish That Must Be Granted, and the Ninety-nine That Can Be Done Without

22-year-old Ryouta is an unemployed good-for-nothing who spends his days living at home and playing Btooom, a wildly popular online game that's sold over three million copies worldwide. Alongside other teammates, Ryouta battles it out with others using powerful bombs and sonar that can reveal hidden enemies, and his dedication has earned him the title of...

Follow the style of a Battle royale, some people are involved in a survival game, the fate of survival depends on killing the rest of players.

In a deserted location they have to use their talents to finish the others.

Btoom uses different bombs, in Juuni Taisen different skills, but the goal is the same, to survive in exchange for the death of others.

Literally btooom but better, there isnt many differences other than the fact that the participants in btooom didnt know they were going too participate. Just a Battle royale between shallow characters trying too collect gems from their deceased opponents.

Both animes are about characters partaking in a killing game run by shady people, were there can only be one survivor, therefore everyone must kill or teammate in order to survive.

Yuki is a disaffected middle school boy who has no dreams or goals in life; in fact, the only thing he has is his diary. Writing down everything he observes and documenting every thought, the young boy uses it as an outlet for his imagination. One morning, however, Yuki wakes up to find his cell phone filled with diary entries for the next...

It is a game of survival, who kills the other players will have as a reward, apart from their life, make a wish come true.

In both animes they have different abilities to obtain it, of combat or supernatural.Alliances, betrayals, and lots of blood.

The tones in both are very dark. The stories in both center around a survival game where every character has a unique ability. Both even have a slight mystery aspect to them. Mirai Nikki is much more focused on the exploits of the two main characters while Juuni Taisen is more about the game itself.

They both have to deal with a controller of a game and only one person gets to survive. This is a shorter version of Mirai Nikki basically.

The Holy Grail War is a battle between seven magicians who each summon a mythical hero to fight for their cause. Shirou, a twice orphaned high school boy, had so little magical talent that his foster father did not bother teaching him about the war and its meaning. Thanks to that lack of foresight, Shirou finds himself in a bit of a pinch when he accidentally...

Both are fighting tournament series to the death withe Fate the death of the lendary hero or the person who summons them the winner gets their wish granted. If you like Juuni Taisen but wanted more things to happen in the series the Fate franchise is a good option to watch.

The whole premise of the two is almost exactly the same: a city remains oblivious while several themed superpowered freaks fight to the death gladiator style in a giant city, usually at night for some reason. The character designs of both have the same kind of aesthetic to them, and all the characters are very different. All of the character arcs contain a flashback of some kind, turning into more of a glorified character study at some point. The direction they take these character arcs in is almost always predictable, but great if you find forced exposition entertaining.