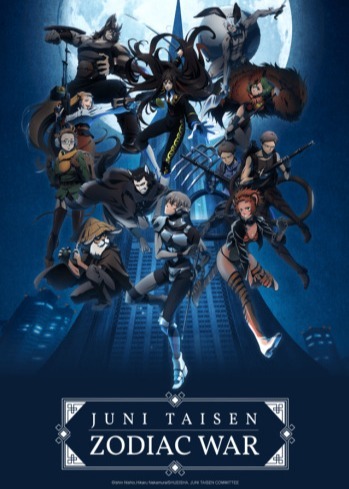 This had so much potential, all wasted. I enjoyed the animation and the music. Action scenes were decent.  Lacking depth of plot and the weak character development really was the worst part of this. After the first episode or two, the novelty had worn off, and the killer bunny no longer fascinated as much.

Also, whoever decided it was a great idea to spoil the final victor, you'll pick up on what I mean if you're paying attention while you watch, should have their pay docked. It turned into more of, "I know who dies next, wonder how they'll meet their end.  Never really found myself rooting for any of the characters, usually just  left feeling "Meh, so he/she/they died". I kept watching hoping that it would improve, but the final episode and ending were a huge let down.

Juuni Taisen is a very underrated and under appreciated anime. People were not prepared for the very harsh yet realistic themes portrayed in Juuni Taisen. I think this is one of the best animated dramas to come out within the last few years. Surpassing other life and death dramas that I call my favorites such as Death Note and the video game version of Danganronpa. And is in my opinion on par with the Zero Escape series. It is not only the themes and the plot twists, but also the emotions that the characters go through and how personal each characters back stories feel.

The music is also one of the animes strong points in my opinion, there are some songs that are so action-packed or sad that I would say that it is one of the best soundtracks in modern anime.

All in all, I would say Juuni Taisen is a near masterpiece in my opinion is one of my favorite animes of all time. 9/10

Is there even one? I honestly don't know. There's a bunch of shallow characters fighting to death; who needs plot? The problem is with the thrill. There simply isn't any, because you know who's going to die even before watching the episode, thanks to names of the episodes and the ending. As for the characters backstories, they are mostly boring, yet some of them present interesting ideas at least, but, of course, the execution manages to butcher them each and every time.

It's nice to look at, I suppose, but it's not anything special. And as the show progresses, the budget visibly lowers. The random 3D moments are ridiculously disturbing.

There's a wide variety of voices, which fit the characters very well. And that's a nice change from all the high-pitched screaming females and grunting males. The soundtrack doesn't really stand out, but the opening and ending fit in well with the overall feeling of the series.

The only reason worth watching this show.

The most interesting feature of the characters is without a doubt their design. Everyone looks so ridiculously edgy it's hilarious. They don't have any actual personalities, safe for a few basic characteristics, but this is not the type of anime where you'd look for one, and as for picking favourites, you'd best do with either picking the edgiest or the one who represents your zodiac sign.

Everybody, clap your hands!

It's an edgefest. What more can I say?

Juuni Taisen was incredibly entertaining. It's not the most philosophical or gut-wrenching or amazing. But if you are able to suspend your disbelief, it's an exhilarating ride.

I found every character to be memorable and interesting in their own way. The first episode threw me in for a loop because it was totally unpredictable, and after that I was hooked. Think Game of Thrones with an oriental twist. I also found the ending to be quite appropriate.

The primary message is that war simply sucks. But the ludicrous, exaggerated characters, their bloody journeys, and their over-the-top outfits were awesome. It's really fast-paced, and I wish the series was longer to develop the relationships between them further.

The world wasn't that compelling, and also quite contradictory. The show is more symbolic than literal, so don't try to make too much sense out of it. Each one of the characters represented something different: nihilism, idealism, righteousness, identity, competition, brotherhood. So it was interesting to see at a high level how each of these doctrines clashed to the very end.

If you're looking for something comedic and bloodthirsty, this is a great choice to strap down and enjoy the show.

Should you watch Juuni Taisen?  Well, let's see...  Do you like being bored?  Love knowing exactly what's going to happen long before it happens?  Enjoy flashbacks?  Dissapointing fights?  Pointless monologues?  Do you really hate action sequences, and just wish the camera would cut away at the last moment, or that characters would die boring, anticlimactic deaths instantly without the chance to fight back?  Then this is the anime for you!

My score here's not for the concept.  The actual concept seems pretty cool.  12 warriors in a Fate style death game, each with special powers and characters based on the Chinese Zodiac.  Get hyped, right?

The story problem isn't with the concept or overall plot, which should be pretty mindless and fun.  The problem is with the storytelling.  The show spoils every death with its episode naming, the order of the characters in the OP and ED, and based on which character's boring, shitty inner monologue you're being subjected to.  There's no surprise, and there's an abundance of flashbacks.  One for nearly every character, though some characters get more.  Especially the ones that you care least about.  There's a right way to do flashbacks.  They can be interesting, informative, and provide a bit of depth to characters.  This anime, however, opted for the worng way.  They are tedious, take up the majority of each episode, and each character's uninteresting path to Juuni is covered in the past, before snapping back to the present in time to see them get instakilled.  It doesn't make their story more interesting.  Instead it's a bit like introducing the hero to a tale, showing his childhood, the event that led him to begin his adventure, then having him get shanked by a hobo moments after leaving town on his adventure.  It will leave you wondering why you even bothered watching it.  One thing is for certain, though.  You were not watching it for the...

because the animation is garbage.  The character designs are actually pretty solid, and the OP and ED are both rather cool.  But that's how they get you.  It's all just a clever ruse to draw you into a show that blew its budget and the bulk of its time making those credits.  The rest of the show has no action scenes (In a deathgame of all things!) because those would have coste money to animate.  The characters fall off model because it takes time to draw properly.  The few brief moments of action-adjacent animation dipped into the classic anime bag of tricks and pulled out "Crappy CG Effects," as the solution to the time and money woes.  It looks alright in the first few episodes, but by midseason, it's absolute garbage.  One thing it does have going for it, though, is the...

You've got to give credit to these voice actors.  The script they had to work with was terrible, but their voices were spot on for the roles they were playing.  OP and ED were pretty good.  As for the sound effects, well, it's easy to do SFX for an "action" anime when no action actually occurs.

This is a tough one to grade.  This anime had a decent concept, but they decided not to do anything with it.  When you take your deathgame anime and throw the deathgame aspect of it out the window to make room for a character study, then you'd better have damn good characters.  Juuni Taisen had....  eh...  a couple decent characters.  Several characters were useless, and you'll wonder why you're being forced to get to know them.  Then a couple are actually pretty ok.  Not well executed, but not terrible, either.  Making these mediocre episodes shining gems in anotherwise bleak season.  Then the rest of the characters have a nugget of a good idea, wrapped in an oozing pile of feces.  If it weren't for the terrible writing, I think half, or maybe even more of these backstories could have been worthwhile.  Sadly, that terrible writing is definitely present, so they're just not worth spending your time watching.  At all.

I strongly recommend you choose a future for yourself that does not include this anime.  Pass this one up.  100 out of 100 times.