Jungle Emperor Leo: The Brave Can Change the Future - Recommendations 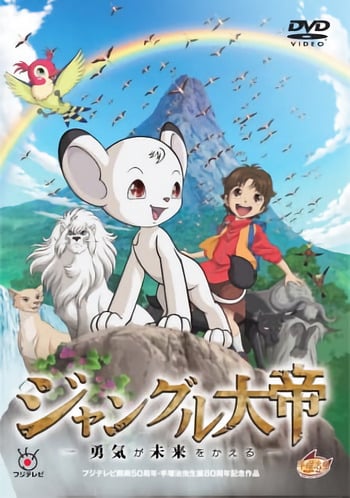 If you're looking for anime similar to Jungle Emperor Leo: The Brave Can Change the Future, you might like these titles.

Unico is a special unicorn with the ability to make anyone he meets happy. But the gods are not pleased, and out of jealousy, they bid the West Wind to exile young Unico to the Hill of Oblivion, where he shall stay, alone, forever. Luckily, the West Wind is a kind soul and instead, hides Unico away from place to place, keeping him shielded from the eyes of the gods. Along the way, Unico must make new friends and even save the world from an evil power!

Both anime are based on characters created by Tezuka.  They both have a somewhat simular feel.  Also, the character of Leo reminds me of the character of Unico.  I think that you like one, then you will probably like the other.

Both anime are based on characters created by Tezuka.  In both anime, scientists interfere with nature in some way whether it is creating an enviroment (in JEL2009), creating mutants (in Bagi), or cloning (in both).  Bagi is a bit darker (though JEL2009 has it's share of dark moments too).  Still, if you like one then you might like the other.

When a tree close to a river gets destroyed by a human construction site, a family of rats is forced to move out and find a new home before the winter comes. On this unforgettable journey, they'll run into many dangerous situations while also meeting valuable allies along the way.

What do a giant panda, a red panda and an opossum have in common? Besides the fact that they all travel around on the same flying pink dragon, they also are part of a team entrusted with protecting the environment. Together, the trio helps save fellow animals in distress, keeps species from becoming extinct, and make sure the world’s destructive foes get what they deserve. Fur farmers, woodcutters and poachers beware! These animals are on a mission to keep Earth safe by whatever means necessary!

Nobita finds a small plant still in a container at an abandoned area and decides to take it home. His mother asks him not to put it on their garden because it won't have space to properly grow. Therefore he asks Doraemon for help. The robot cat then uses a special plant converter from the future that will allow the plant to move freely without the need to form roots attached to the ground. Named "Kibou" (Hope), the small green creature gleefully plays with Nobita and his friends. The group is taken by surprise when they are suddenly transported to another planet governed by a society of plant beings. Doraemon and his friends then discover that due to mankind's mistreatment of nature, the green population is planning to remove all plants from Earth. They must now return home and find a way to save the world.