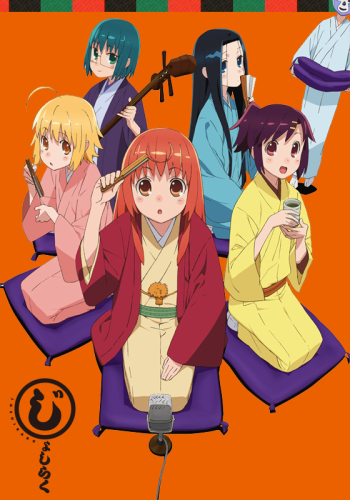 This anime is reeeeeally Japanese and I definitely wouldn't recommend it to just anyone. It has layers and layers of meaningful levels, is full of references to parts of Japanese culture that the average international viewer wouldn't usually know about (including myself--I could often tell there was a reference without knowing exactly what it implied), and it bases much of its humor off kanji and wordplay. If you watch Joshiraku and all you giggle at are the girls' antics, you're probably missing half of it.

Story: Not rated because there really isn't one, just a series of sketches.

Animation: Pretty average, not a lot of action scenes.

Sound: Gets a nine for the theme songs and voice acting.

Characters: Funny, but don't often break out of their typed roles. No long-term character development.

Overall: A subtle, delightful comedy with a limited audience. Probably rates a 9/10 from those who really deeply know Japan and its language, but there's a lot of potential for obscure references to get lost in cross-cultural translation. I give it a 7.9 for simple inscrutability.

Joshiraku is an anime of that sub-genre of 'Cute Girls Doing Stuff,' in this case the practice of rakugo, a Japanese theatrical form of story-telling with a touch of humor.  Five girls of different backgrounds go out to do their stand-up kneel-down on a pillow comedy routines which are politely received with light rounds of applause (usually that of three or four people, but one might note that the volume of the clapping lessens as the season goes along).  Then the girls stand up, reverse the pillow for the next performer, then go backstage.  There, the real humor begins.

The girls' individual personalities create the chemistry for the gags.  Marii is the cocksure bumpkin new to Tokyo, which usually makes her the butt (and I do literally mean 'butt') of the more ribald jokes.  Kigurumi is the sweet, innocent girl who hides a deep streak of cynicism under that same syrupiness.  Kukuru is the sickly neurotic girl who finds a way to get depressed every time.  Gankyou is the bespectacled girl who must have heard the 'four-eye' taunt much too often; her vicious streak erupts, and Marii is the usual target.  The straight character is played by Tetora, whose down-to-earth attitude makes her the sage of the group and keeps her from those comic pratfalls (she also looks the best in the swimsuit fanservice episode, go figure).

But the humor of Joshiraku gets crass and vulgar, with any number of exposed tooshie shots.  But the humor ties in too closely with the Japanese culture.  This means an awful lot of notes which flash on the screen to explain the backdrop behind the humor.  I can't remember how many times I needed to pause to read, but I do know that Joshiraku needed a bunch more.  And that is the sad thing about humor.  If you have to explain it ...

Add to this the nature of Joshiraku's comedy being repetitive.  Elements reoccur, as the masked member of the rakugo troupe who pops in from time to time.  The luchador never says a word (yet she is 'voiced' by Aoi Yuuki, easy money if you ask me), but adds the factor of mime to an already ridiculous comic banter.

The comedy is situational, and that due to the episode being fractured into a series of short features which never seem to have any idea of continuity.  The common factor is a descent into physical humor with Marii as the typical victim.  It centers on neuroses and plays a good round of political satire.

One compelling part of Joshiraku is the breakdown of the thirteen-part series.  It is played as a ‘stand-alone’ with no hope for a second season, and the characters know this.  The girls understand when they reach the midpoint of the series, and is given advice from a particularly obnoxious character who reminds the girls to end well.  But it ends with Marii taking the stage for a performance where she reminds the audience that the world is a somber place resulting in death, and that the only weapon we have against this is the power to laugh.

The animation is flat, but it uses a bright color scheme to accentuate the action, which usually is conversational.  The word-play is often lost on the Western ear, even in translation, but somehow a sudden burst of garishness keeps the laughs coming ... when you actually catch one.  The themes help to emphasize the role of humor, particularly the charm of egao.  Smile.  Joshiraku gives us reason to do this, if we can break the cultural barriers (hey, they took a poke at Abe Lincoln, so their effort to make humor international was well-received if we play along with the gag.

If not, Joshiraku goes down in a ball of flames.

This anime is all about cute girls and their totally normal dialogue.