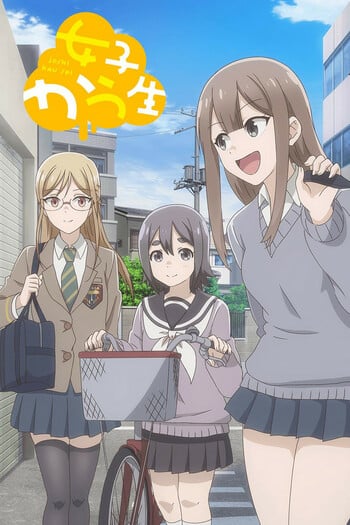 Who needs dialog when you're this cute? The beautiful (but unlucky) Momoko, the cool, collected Shibumi, and the refreshingly innocent Mayumi star in a "silent manga." No speeches, no dialog! Just pictures, sound effects, and three high school girls living their daily lives.

The High School Girl and Thighs

The High School Girl and the Unlucky Day

The High School Girl and Drowsiness

The High School Girl and the Family Restaurant

The High School Girl and the Skateboard

The High School Girl and Working Out

The High School Girl and the Foggy Window

The High School Girl and Hiding from the Rain

The High School Girl and the Hair Barrette

The High School Girl and the Kotatsu

The High School Girl and the Road Home

A slice of life about 3 high school girls who act more like grade school girls. There is no dialogue but plenty of sound effects and laughter. Oddly enough the girls mouths move on occasion but never any dialogue. I gave it an extra star because all the episodes are under 5 minutes in length, which is about all I could stomach. I would have dropped it, had the episodes been longer. I cannot recommend it, unless you want to get an image of a bad episode off your history que in Crunchyroll, but you should do the dishes or something, while it is playing.

Mmm...not really a good show. It is episodic for the most part, but otherwise nonsensical. Animation is bland, non-inspiring. Honestly, there is nothing much to it. The action feels stiff. Sound wise, there is nothing. Because voicework is nonexistent, the sounds should make up for it. Sadly, it is also uninspiring. Characters...again, because of the lack of anything to work with, they are forgettable. They have quirks, but because of the lack of substance, they don't have anything endearing behind them. You really can't feel anything for them. Eh...overall, not a good show. Won't lie when saying that I wasn't bored by it.

What the hell did I just watch? And why the hell did I watch it?Throughout this, I just kept telling myself that it's only 3 minutes per episode so I may as well watch the rest. I think I was trying to figure out why some people on MAL scored this at a 7/8 & 9. I don't think I will ever figure out what those people saw in this show.This has to be one of the dumbest, mind numbingly ridiculous shows I have ever watched. I mean...WTF?Story: Again...Wtf?So this is show about…well, to be honest I’m not quite sure what it’s really about. I still haven’t figured out the purpose or meaning of the show or it’s characters. The most likely and most reasonable assumption would be, that there simply isn’t one. To sum it up “It Is, What It Is” & you have no idea how much I hate that saying, but I can’t help but feel that this ridiculous saying and this ridiculous anime, were made for each other. The show is episodic. There is no overall story/plot, no direction and nothing interesting happens. Its just a series of random events. Oh, and there’s no dialogue, it’s classed as a silent anime.3 girls go about their day together and wind up in some unusual and unrealistic predicaments. The girls who are meant to be high school students are seriously immature, they behave like little kids. Is this supposed to be cute? The episodes are packed with the worst attempts at fan service ever. I mean there is nothing remotely good about the fan service, I can't even say is so bad that it's good, because it simply isn't. It's all just very peculiar and totally absurd. I mean the first episode is all focused on a thigh fetish and other weird girl on girl flirting, I have nothing against girls flirting with each other, but in this shows case, there is nothing sexy about it. It’s just weird. The girls are all so immature in their personalities, that they innocently land themselves in provocative predicaments as a consequence of their stupid behaviour. Well the studio aimed for sexually provocative but ended up with a mix of weird & unflatteringly lame. Sound: I’m lost for words…Just as this anime was.What can I say, there isn’t much! There isn't a dialogue, this is meant to be a silent anime. However, it does have the characters laugh out loud and make strange god-awful noises to express themselves. What I found really odd is, their mouths still move in some episodes, but there’s no sound. I mean WHY? Did they animate the mouths accidently?Barring a few very childish girly giggles and squeaks and other weird expressive noises, their isn’t any voice acting. Although, if there were, it would probably have been painful to listen to. If the standards I’ve seen so far in every other category are anything to go by. The music is annoying too.Art: Terrible, Though it was the better of all the categories, but only just!The art was lame and unimaginative. The expressiveness was void and about as useful as the silent dialogue. Nothing good to say, it was pure garbage. If you going to make a anime without dialogue, the art has to be at a level where it is expressive in itself, it has to paint a picture & do the talking. The art should have been capable of communicating to the audience. It didn’t do a thing!I also want to note that the art lacked detail, For Example: The facial expressions were weak and it was difficult to differentiate which emotion they were supposed to be portraying. The characters and art overall looked like the illustration team had had a few too many the night before and due to this, had thrown in the towel, then rushed and crammed in the work at the last minute.Characters: They need rehab!The characters are all childish and irritating, they’re supposed to be high school students for goodness sake, so why do the animators to have them acting like elementary school kids (primary school)??? The behaviours of these characters are not remotely normal. Its like they’re all trippin on some serious Psychedelic drugs (hence the need for rehab).Enjoyment: Need I say anymore?I think it would be in poor taste to pull this anime to pieces any more than I already have. What can I say… I’m nice like that! 😜 Overall: Remember, every minute you spend watching this anime, is a minute you can never get back. I’ve wasted 30 minutes of my life! Life is precious! Learn from my mistake! ** On a separate note...The manga apparently has no dialogue either. How does one read a manga with no dialogue? Isn’t it just a picture book??? 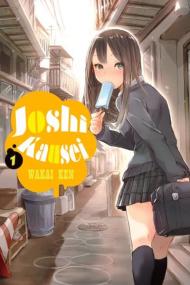