Josee, the Tiger and the Fish - Recommendations 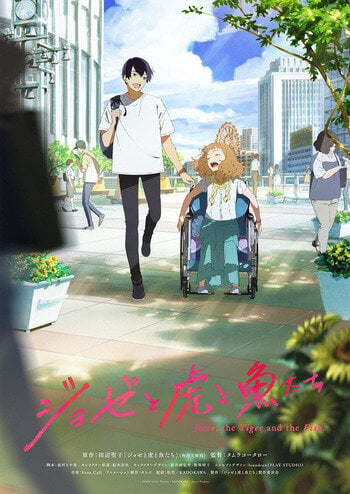 If you're looking for manga similar to Josee, the Tiger and the Fish, you might like these titles.

Sitting outside the dance floor at her cousin's wedding reception, Matty notices a man beside her and says hello. His name: Sebastian. A banker from New York. They start to hit it off, and Matty decides he is the ideal companion...for now. That's right-no matter how much Matty enjoys the relationship, she refuses to get too close to any man. That is the decision she made after her own carelessness cost her the use of her legs. Goodbye, Handsome. Little did Matty know that the man in question was determined to take the woman in the wheelchair out on a date!

"He's the only one who will see the real me." Having left the garish modeling world behind her, Lynne moves to the quiet town of Gettysburg. Tired of being praised solely for her looks, she's changed her name and clothes in order to finally live in peace. But on the day she moves into her new apartment, Lynne gets into a dispute with her neighbor Brendan after he trips over some boxes she left in the hallway. Little does Lynne know, Brendan is blind. Light no longer reaches his beautiful eyes. Brendan promptly forgives Lynne for her embarrassing blunder, and before long the seeds of love are sown in the unlikely pair.

In the same collision that killed her mother, Dana’s face was scarred for life. To cope with the pain and suffering, she accepts a live-in nursing job for a temporarily blind man. Gannon has been swamped in anger since the day he lost his sight, but Dana’s determined to bring the light back into his dark, closed heart! And once his heart awakens, who knows what future it might find?

Adam Ryder, his film production studio on the brink of collapse, answers a summons to be considered as a candidate for the throne of Niroli. With money on his mind and a rambunctious child at his side, Adam hopes to manipulate his position to save his company. Then he meets Elena, a blind piano teacher who inspires love in him—love for Niroli, for his son, Jeremy, and for Elena herself. Unfortunately, the royal house has some strict requirements for becoming king that may threaten what happiness he's found.

After losing her ability to walk in an accident, Erin was forced to quit her job as a model. She felt miserable, but then she received news that her friend Bruce had passed away, as well. His will gives Erin everything he had, but there’s one condition—she must live with his brother, Tyson, on their family farm in Texas. Why would Bruce do this to her? In the past, Erin was attracted to Tyson’s solitary nature and she slept with him. The very next day, he sent her packing. She still bears the emotional scars from that day. Is this Bruce’s revenge?

Standing outside the office of blind novelist Saul Cresswell, Autumn silently prays for the courage to knock on his door. Four years ago, it was her young love that stole his sight. Racked with guilt, Autumn disappeared from Saul's life. However, wanting nothing more than to be his strength, she returns under the fake name Elizabeth to work as his aide. As she watches Saul gallantly overcome the obstacles that plague his life, Autumn's youthful affection swells into ardent love...

Twenty years ago, the small European kingdom of Nabotavia was the site of a revolution that forced the royal family, the Roseanovas, out of their kingdom. Weeks ago, Prince Damian of the ousted Roseanovas was involved in a horrific speedboat accident that took his sight, and left him with a life of cynicism. With only a fifty-fifty chance of his eyesight returning, Sara Joplin's been hired to help him cope with his blindness. There's one small catch: she has two weeks to transform him back into the prince he is or this chance for the Roseanovas to return to power will be completely out of sight. Can she handle a prince that doesn't want her help?

A story about a girl who suffers from the eye condition known as Low Vision, drawn from the mangaka's own personal experiences with the condition.

Kakinomoto Karin, the daughter of a millionaire, lost her ability to walk in an accident. During her stay at the hospital, she fell in love with the medical researcher, Okita Teppei! She bought him a house, but only on the condition that Teppei spend two hours with her every day. Karin, who only wanted Teppei's heart, will one day find out that not only does Teppei already have a fiancée, but he also has a frightening split personality...!