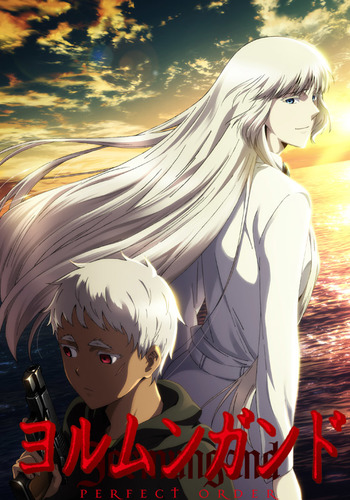 This series has great art; astonishingly detailed design for weapons, vehicles, locations and characters; good color and great sound. Alas, the story is simply boring, and the animation is close to non existant!

From Jormungand's start, you get the feeling of not knowing everything that is going on in the background. That's fine for shows that force the audience to elaborate on backstory while developing the facts around main characters.

However, after going through half of the second season (Perfect Order), the story becomes less and less interesting. There is simply no plot. There's only isolated events occuring in no particular order.

There is also no character development. You get cool characters from the beginning, and they remain exactly the same amount of cool until the end. To be fair, you get to know each of the main character's background because the series devotes one or two episodes to each one of them, but the narrative fails at delivering credible inter-character bonds.

So after watching 70% of the thing, you learn every character's name and realise just how unimportant they are because you didn't notice their presense before their respective "dedicated" episode.

Also the core team is so perfect at kicking ass, that it would seem like they're almost never in real danger. So why bother caring for any of them in particular?

After witnessing some unexpected (and unimportant) death, you'll know what I mean.

Now let me explain the lack of proper animation in this work:

Jormungand relies on any available storytelling trope for not animating a single character for more than a couple of seconds.

All movement you see (in terms of character animation) is eye blinking, mouth open-close (including smiles), and walking loops. When lucky, eventual hair/clothing waving is also present.

For an "action" title, you would expect some fight animation. But it just happens that most of the "action" is only "heard" or implied by the viewer, because most of the storytelling is based on "offscreen moments of awesome" (google that if you don't know what I'm talking about). There is only about three scenes where I remember actually seing a character move to fight, and those were very short clips indeed. Most of the would-be-epic battles are not shown, only the resulting corpses depicted on the ground, moments later.

Appart from that, for action scenes you get lots of scrolling, paning or zooming on stationary frames between camera cuts. It is done SO OFTEN that it's plain ridiculous. After a while you start wondering if this is a slideshow with a contrastingly good sound work.

Oh wait, I forgot to mention some "actual animation" that really shows: all characters shooting with auto rifles. Except they all stay on their spots. Yup. Stand there, shoot with your rifle. At the exact same target who is also not moving.

Also, many events are only "told" from one character to another (be it during a phone call or in person). Like "oh, I'm so tired after having that though battle with the bad guys this morning" or "did you hear the special forces just wiped the terrorist group in the south?".

Other stuff moving on screen are the vehicles, which are clearly CGI but at least the result is very pleasant to the eye.

I have to admit that the post-production is very well done also. All in all the visual quality of Jormungand is breathtaking, even if animation efforts on characters are kept to a minimum.

In conclusion, Jormungand is a succession of unrelated events, leading to a somewhat interesting story developed in beautiful scenarios, where you get to know very cool characters who talk a lot, who are also unrelated, and for some reason, almost inmune to bullets.

For a similarly intricated and beautiful style, but containing the right amount of animation, I recommend Fate/Zero.

Now THIS is what a War anime should be like.

Reviewed after finishing both seasons.

Characters are original and non-generic, mostly very skilled in their own specialized field- none of that expert-at-everything bullshit you see nowadays. You will not get any whiny losers here, thank god for that. Now, while conflict is almost always won with intelligence, there are unfortunately certain parts of the series where the enemy simply misses too many bullets (storm-trooper syndrome) to be realistic, but the plot and character development makes up for it.

When it gets down to it, the overall concept surrounding this anime is the question of 'How far are you willing to go for your goals?' And in this anime's case, the answer is very very far. It's been an absolute pleasure watching Koko and her team descend into the greyest of moralities. Rather similar to Griffith in some ways.

If you're like me and love stories that challenges these big question, watch Jormungand.

....Why? Why would you name the second part OF THE SAME ARC a different name as the rest of the series?

As you may have guessed this series is the second part of the arc from the first series. Why they called it 'Perfect Order' is beyond me. Nothing new is started and only the main arc from the previous series is wrapped up.

Everyhting I wanted to say about this series I said in my review on the first season.

This was written after watching both seasons.

Jormungand is heavely focused on its main cast, Koko and Jonah. You follow them for a large past in a series of unrelated events as they showcase more and more of who they are and what they stand for. Most episodes also feature a main-side character, which is okay since there aren't any generic or double characters. This continus up until the second half of the series where they decided to give meaning to the title and they introduce Jormungand, the ultimate plan of Koko and Miami. This is quite refreshing as the tension builds with every episode, so if you like a anime which features both on screen and behind the scenes this is where you should be looking.

There should also be something said about the sound. It is great. You never get the DB feel when you notice there is no backround noise, because it's there when you wan't it to be. Also the tracks are great, if a bit repeative, it is a balance of electronic and rap to almost support the characters on screen and to keep your focus.

One thing you might miss are cute bright colours, loli's and Neko's as Jormungand has hardly any fansevice (if you don't count the bit to large boob here and there) and want's to give you some really deep stuff to think about.

What are you prepaired to do for world peace?