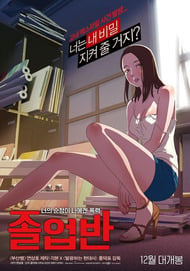 262 users are tracking this. Log in to see stats.

SPOILERS AHEAD The main focus is on the protagonist, an art school graduate, discovering that his classmate, the top student, is working as a hostess at a club to earn money to study abroad. Story's very basic it could be done in 20 minutes not 1 hour and 20 minutes. It's crudely dragged out with really weak fillers, pacing is really slow and really boring. Backgrounds are painted and characters are stiff 3D models. Character interactions and dialogues are really awkward and disjointed and the 3D models makes those faults more obvious and worse. The jarring experience of watching the film is somewhere between Berserk 2016 and Ex-arms. The sex scenes had proper care and best quality put into them and the most entertainingpart of the film(it's only two scenes sadly).I honestly wish the movie was just animated porn instead of what we got.  The most infuriating fault of the movie is the protagonist. He's an incel. As dumb as that term is, he properly fits the term. He's lame, boring, weak, indecisive, awkward, cowardly and he's almost as significant to the movie as I am. I really hate when he's on screen and I hate how he treats his classmate, Joo-hee. It's painfully obvious he likes Joo-hee and the movie expects you to give a crap that his love will never be recruited. First of all they're not dating. They're not even friends just classmates. Second, finding out about her secret job didn't change their relationship at all. She just asked him to not tell anybody, he agreed and their lives go on. They never dated, never spent time together, never interacted with each other differently, literally no development to their relationship. The plot only progresses when the incel's friend, the douchebag, finds out about Joo-hee's job, spreads it around school and their professor threatens to expel her for "shaming the school". Joo-hee's reputation and future is at stake and what does the incel do to help: ABSOLUTELY LITERALLY NOTHING!!! All he does is watch, panic and mope around. When Joo-hee begs him for help the best he did was speak to the school's administration and found out that the professor had no grounds to expel Joo-hee. She could have easily spoken to the administration herself, but no let the incel be the hero. The Incel doesn't tell Joo-hee what the administration said because the douchbag told him that Joo-hee begged for his help too and threw herself at him (said not shown). Why the fuck would he believe that douchebag (who took advantage of a drunk women and dumped her because he didn't get anything from her in bed and the incel saw it) over Joo-hee. When she rightfully tells him it's none of his business what she does or that he's not her boyfriend he slut shames her (he slut shamed her before the school did). When Joo-hee calls him from a motel telling him she's going to sleep with the professor because he said he'll let her graduateif she does. She's crying and practically begging for help and the incel insults her, threw his phone away and cry in his bed (this happened after he was done masterbating to her graduation photo btw). The incel did nothing to earn Joo-hee's love but when she's shunned by everyone and he was her only ally, he made her situation worse and he acts like he's the victim. The movie ends with the incel, the douchebag and their class graduating from art school except Joo-hee. He found her crying in their classroom and she told him she dropped out and will return to to finish her in a few years. FUCKING WOW !!! I'm not sure what the movie is trying to say. Because the dialogues are not properly executed, you're told things not shown things and you're glued to only to the protagonist's perspective you don't who's right or wrong. Was Joo-hee misunderstood or was she really that easy ? Did she throw herself at the douchebag or slept with the professor? So many unanswered questions. Don't bother watching this unless you want an animated film made by and starring an incel.