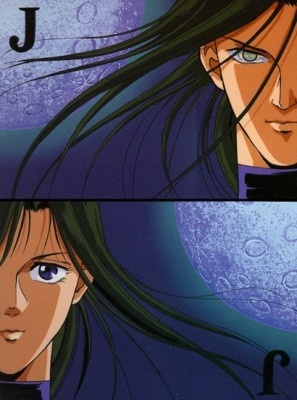 This anime should hae been named Joker: Mediocre City. The title character is far too interesting for the anime's storyline or other characters, but let me explain that a little further by breaking this down.

Story: So, the synopsis is that there is a cyborg going around killing young women, and the police are stumped. Enter Joker, who has the ability to be both male and female at will, and loves the new detective. The story then completely derails for a date with fem-Joker and the detective, then immediately goes back to the story when Joker showcases their skill as a special agent. The story is then entirely about how the killer cyborg has daddy issues. The story was rather bland, in my opinion. And for a single OVA, the plotlines should have connected better, but they felt jumbled to me.

Animation: Oh, the 90s. Your colors and artwork bring nostalgia to me. But, this anime didn't hold up to the test of time. The chins are almost as pointy as yaoi is satirized as being. And the backgrounds are just rather bland.

Sound: They played elevator music while a woman was dying. How messed up is that?

Characters: Joker is amazing. If I had the ability to swap genders at will, I'd tease people about as much as Joker does. The detective is completely one dimensional Duddly-Do-Right, and the villain is a Ken Doll with issues. So, when 2/3s of the main cast are boring, the anime comes off as boring. No matter how great that last 1/3 is.

Is this worth watching? No. Not even Joker was worth watching this anime. I would say "read the manga instead", but there is no manga. Joker is forever stuck with this mediocre anime. It's sad.

This show is fun, not other way to put it.

We follow Rin our plucky young cop who has to try and catch a serial killer who isn't after his superiors gorgeous moustache. Enter sexually ambigious duo! We have the serial killer a manish android with no junk and a womanly voice and then we have Joker the ambigious in that she/he/it/they can turn into a male or female at whim.

Animation: Sadly it does show its age a bit (aside from the aviators,moustache and 90's tank tops) but it's still quite good looking.

Sound: Typical 90s techy cyberpunky music so a plus!

Characters: Well Rin is kinda bumbling, Joker is a badass man/woman and the serial killer is just after some love.

Overall great 40min watch and would recommend it to anyone!