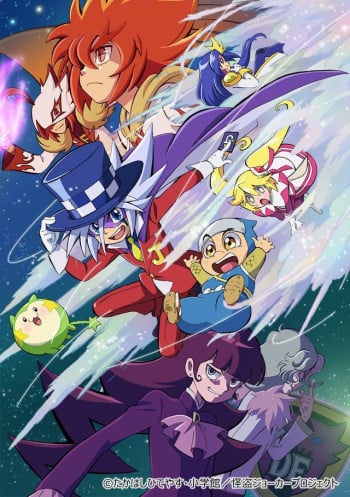 By day Kaitou Kuroba is a regular high school student with an aptitude for magic, but by night he transforms into the notorious thief and master of disguise, Kaitou Kid! Announcing his next target to the police by way of a note, Kaitou Kid uses every trick in the book to steal the loot of his dreams from under the nose of his rival, Inspector Nakamori. From a jewel-encrusted crown to a rare pink diamond, there's no challenge too tough for the young thief, no matter how impossible the situation may seem or how many officers attempt to stand in his way.

Recently, members of a group of thieves known as the Genjibotaro have been methodically murdered; their assailant is unknown. Meanwhile, Detective Mouri has been called to the Sannou Temple in Kyoto to find a stolen Buddha statue, and he has brought Conan along with him. With the help of Heiji Hattori, our heroes must solve these cases; are they connected in some way?

After a successful heist at a Moscow casino, Lupin III uses half his gains to buy a two seater plane, only to crash land at the funeral of an older master thief and previous competitor, Mark Williams. Lupin and Jigen pay their respects, but as always, Fujiko turns up with a mission for a prize, as addressed by Williams in his will regarding Lupin! Williams has left Lupin the task of returning his stolen artifacts to their owners unnoticed, in exchange for the Trick Diamond. It is fabled that the Trick Diamond is actually the key to a much greater treasure, about which very little is known. Lupin's reversed role of returning stolen items is complicated by a revenge seeking Russian casino chief, and Inspector Zenigata's tireless pursuit. Will Lupin and his gang return the treasures and gain the Trick Diamond? Or will they be thwarted or double-crossed by friends and foes?

Lupin and Jigen are in New York and have decided on their latest heist: fixing a horse race in order to collect on the outrageous odds. The plans are set; all that’s left to do is wait. However whilst out buying ice, Lupin runs into a girl called Michelle who is being chased by three men. She asks him to steal a diamond from her father – a request that Lupin accepts; and so, after meeting up with Fujiko (who has her own job planned) and poaching Goemon from her, Lupin is ready to go! Meanwhile, Jigen runs into an old friend, who has a proposition for him – to steal a secret weapon from a security firm. But, when Lupin’s task takes him to Thailand, he begins to realize that the gang’s respective jobs are all intertwined. With a seven-day time limit, will Lupin and Jigen make it to the big race?