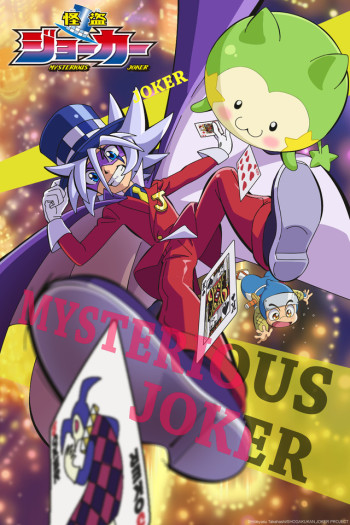 When the second season revamps the whole story premise, there is a tension whether it will surpass the first season.  As Joker 1 and 2 dealt with the master nemesis Prof. Clover, offing the old devil would mean reworking the criminal network which will rival (and possibly even destroy) Kaitou Joker.  It will determine if what we get is hit or miss.

The strength of Joker has been the toughness and ferocity of the archenemy.  For Joker 3, the nemesis is two-fold.  Name your poison, Joker 3 (and 4, I assume.  Will be watching that set of thirteen episodes shortly) gives you a pair, President D, head of the criminal enterprise Devil Fang, or Phoenix, Messenger of the Southern Cross.  If you want the real rotter, put your money on President D.  Just don't invest a lot of money.  As master of evil, President D is a pallid comparison to a real deep-down vicious Prof. Clover.  Boss around a bunch of incompetent bounty-hunters and assassins, give him an A+.  Do any real damage to Joker and his pals, send him back to Kindergarten.   President D is the real enemy.  Phoenix is the true rival to Joker's phantom thief skills.  Redefining what it is to be cross-eyed, Phoenix is rather a sympathetic figure as we learn, a space castaway who has been forced to remain on earth for a bunch of millennia.  This supernatural character just wants to go home, but he needs to secure the same treasures Joker is after.  And the big prize is still to be sought in the next (and last) season.

The first two seasons ran on a short list of key characters.  The third season is swamped by a flood of characters introduced in seasons 1-2, but with the coming of Devil Fang (DF ... the fact that this bundle of bunglers shares the same initials as Moi ... revolting!), sleaze bags just are coming out of the woodwork.  Standard characters as ultra-rich Mr. Kaneari and Inspector Oniyama are given short shrift in their episodes.  Devil Fang has four assassins as Red Scorpion and Phantom Thief Nightmare who can push Joker to the extremes of his resourcefulness.  Mr. Pyramid Power, the master of turning bad luck into good fortune, returns for the climactic two-part concluding episode, but his appearance in season two was superior.  He was just one more dunce called in for a pratfall.  Shadow Joker and his sister Rose makes a return performance, Shadow as Joker's key rival, and Rose ... got underplayed in her role as main support for big brother.  Basic rule of thumb: if you were in season two, you did better in season two.

Sad, but it was the influx of the characters which caused problems in the storyline.  The new villainy did not measure up to the badness of seasons 1-2.  They developed with an inconsistency where some could not even get off a killing shot, master marksmen as they were.  This led to massive holes in plot.  And I'm not speaking of the linkage of the gentleman's gentleman Dark-Eye to the oldest sibling of the song and dance idol team Shuffle Sisters.  But being on tour means Spade's assistant cannot be on the same place as King.  Queen has no right to lose a 'bride contest' to cross-dressing Joker and an overly masculinized secretary to Mr. Kaneari.  And, when the prize golden bell appears later larger than the first time ... what?  Plots got sloppy, solutions got ridiculous, and Silver Heart's moments to explain the physics of what Joker pulled off played more like the physics which kept Wiley Coyote from getting killed those bazillion of times in the chase for the Roadrunner.  Clumsy is as clumsy does.

New seasons require new music.  Again, the new premise created new music which limped in comparison to the first two seasons.  The best part was the reprise of the 'Nemesis Battle motif' you can hear in the opening credits.  You know, when Joker trades swings at Shadow Joker ... works when Joker goes to blows with Phoenix.  Keepers need to be kept.

All in all, I will take in the last season of Joker simply because the final episode promised a match of wits between Joker and Phoenix to gain the grand prize of Joker's 1000th heist.  Battle through the insipidness to reach the goal if I must!