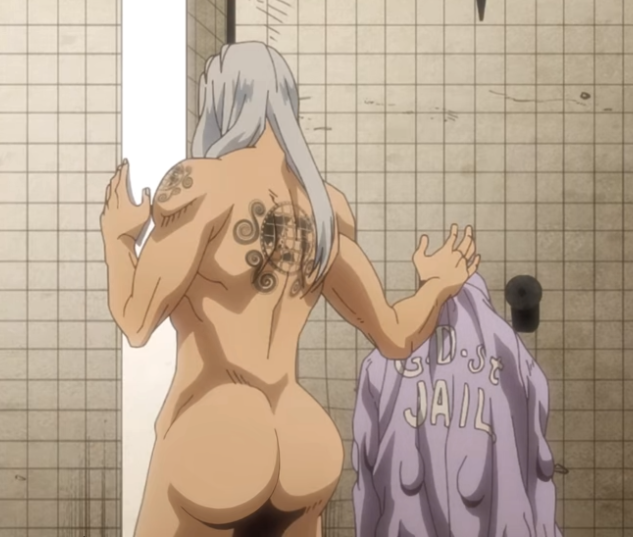 After much anticipation, Stone Ocean is finally here. It is hard to tell what Netflix plans to do with this weird release schedule but this spoiler-free review is based on the first 12 episodes that are out at the time of writing.

As with all the JoJo parts from the modern anime adaptations, Stone Ocean is very enjoyable. You could watch it independently, but it is highly recommended to watch the entire anime series in release order (Parts 1,2,3,4,5 and 6). That said, it is most likely that longtime fans of JoJo's Bizarre Adventure will love this story. The Stands in this part seem more sensible than Golden Wind while the characters (people) feel a tiny bit lacking. Jolyne is a charming JoJo just like her Dad. All in all Stone Ocean feels much less Bizzare than Stardust Crusaders but in a good way. It feels like the plot itself is more on the forefront this time around than the adventures, which I'm personally okay with tbh.

The animation is fine but it is definitely lacking when compared to previous parts of JoJo's Bizarre Adventure. There were a few instances of incompletely animated movements or too few key frames being used. This would be fine with most other shows and some would call this nitpicking, but David Production has set the bar way higher for JoJo. The one bit of animation that stands out the most for me is the Opening of episodes 1 to 12. That 3D camera movement through the still scenes is so amazing. I'm in love with it. Probably the best animation in an opening among all JoJo parts.The sound design and voice acting are amazing as usual and that's all I have to say about it for now.

In conclusion, please watch JoJo's Bizarre Adventure: Stone Ocean. It's definitely entertaining and cool. My rating could change depending on how the show goes during rest of the episodes, but up until Ep 12, it's a solid 8/10

It doesn't make it easier to give a single season 3 different reviews. But as we say in Germany? If you don't grab the sausage, it will grab you. And it should be noted again, this season is once again "typical JoJo". If you still don't like the series by this point, you shouldn't expect anything new here.

The main problems of this season are again in the two typical areas. First, JoJo still has deadly slow pacing which doesn't get better over the whole part. Furthermore, the characters' urge to describe and replay every possible action umpteen times. A scene that is already very slow, unfortunately even more so, as we are only told again and again what is happening. Example. Joyline and Ermes watch as the policeman is pulled into the water and they are about to explode. Joyline looks at him in shock and runs towards the building, while Ermes repeats everything that is happening for 2 minutes while saying how bad the situation is instead of doing anything. During this, the opponents move away from them calmly. And these scenes happen way too often here, which just butchers the atmosphere.

But this is not meant to scare you off, JoJo is still an absolute fan favorite and not for no reason so well-known and popular. This Anime simply has a lot of charisma and manages to make up for many shortcomings well enough with bizarre scenes and solid humor.

This season of JoJo revolves around the daughter of Jotaro, who is in prison and becomes involved in a plot that is far beyond her pay grade. Dio's madness and blood continue to take root in this world, the VIP members of Club Dio want to take revenge on the Joestar family and this is the real subject matter of this season. As usual, the protagonist gets her team, which has to fight together with her against completely unsuspicious stand users. Intending to find "White Snake", who is the Big Bad, and instead of killing the heroes, prefers to worry about shell fruits in his food, after all, he is allergic. The plot itself is very simple and the same game of hide and seek as you know in the other parts.

The introduction of the characters is relatively solid and builds to a relatively quick and stable team as is the case in every JoJo part. Even though some characters (ERMES) are undoubtedly the third wheel and can hardly create anything positive, the team is charismatic enough.

Unfortunately, there is little that can be said about this, except that Foo Fighter is the best character in the first third and Ermes is by far the worst. Likewise, Ermes' background arc is practically just a cheaper and more boring version of Polnareff's.

Joyline is also very much like her father, especially with her reasonably awkward personality and her urge to appear pseudo-cool.

White Snake is very attractive and has a beautiful voice.

The first intro has a relatively nice style that mentions your heart. It's good to see an intro in the appropriate JoJo style again, like the first one.

The osts are decent as well, especially the White Snake theme.

The animations are solid enough to seem just above average, unfortunately often just still as one is used to with JoJo. I can't call the backgrounds particularly detailed either. Predominantly the anime also suffers from very slow pacing and weak scene changes.

JoJo is great, it is an anime/manga that connects people and serves as an endless food source for the meme community. I love JoJo and can watch it over and over again. But unfortunately, I can't say that JoJo is a really good anime. There are simply too many problems and flaws and not enough to fix all of them. Overwhelmingly it's a slow fighting shounen, with heart but a weak plot and bad pacing.

Nevertheless, this season is worth recommending.

When they told me they made a female jojo I had my doubts but, YES GIRL! Though it kills me inside that the coolest female protagonist I've even seen was written by a guy.

JoJo is one of my favorite animes of all time. Stone ocean is on of my favorite JoJo parts it just so damn good. Obviously this part isn't over yet so of course I won't be really reviewing the whole anime if that makes sense. Ok so first of all this show is good so if you are reading this and haven't watched JoJo then go watch you'll have no regrets. Ok back to the review, So these first 12 episodes were so good though saying this as a manga reader I don't really have a full on perfect experience so this review maybe a little unrelatable .What I love about JoJo is that they give time for each character which is always nice. The music and suspense its all just perfect. Overall its a really good show.