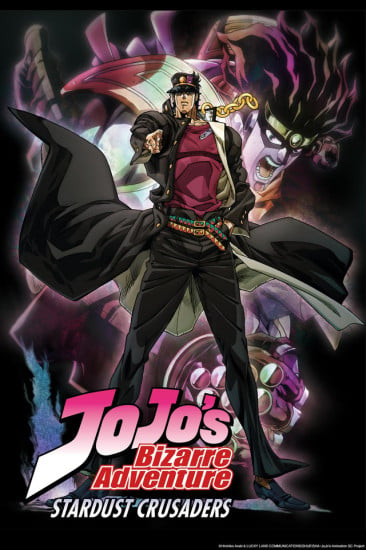 I'm sorry I had to give this an all 10/10 the reason is simple want to see handsome buff man fighting each other? And have your mother walk in and question your sexuality to the scene of Noriaki Kakyoin licking a cherry furiously while staring at jotaro in the eyes well then this is the perfect Anime for you! After watching the series and reading the manga you will soon be shouting out DIO! And "Is That A Jojo reference" to every pose you see the animation and the quality is outstanding its like they have pulled the original work straight out of the manga to the anime this is worth watching!

When I first heard about Jojo, I was immediately excited to watch this gem of a series. I can safely say overall, I wasn't disappointed. However, Battle in Egypt shoots to the stars in quality while Stardust stays on the ground, if you catch my drift.

The story starts off with 17 year old Jotaro Kujo, who thinks he's possessed by an 'evil spirit' which his grandfather (Joseph Joestar from Battle Tendency) and a fortune teller named Avdol tell him he possesses a strange and mysterious power called a 'Stand'. From there, Jotaro meets Noriaki Kakyoin and Jean Pierre Polnareff as the five make their way to Egypt, fighting Dio's assassins who also possess stands.

I will say this: I was definitely not disappointed with any of the characters from Stardust. All of their powers were fairly interesting, even if they were kind of useless. One thing I do have to complain about is that the majority of this part does NOT focus on Jotaro, but instead on establishing everyone else, so our main Jojo felt a little underrated. But to make up for it, Noriaki and Polnareff definitely stole the show. Hol Horse and J. Geil did as well during episodes 10-11. The plot about Polnareff's sister and J. Geil was definitely an interesting turn of events, immediately followed by Avdol's "death" which was all the more heartbreaking. I very much liked how everyone's plots were evolved over time, and I found it interesting that after 'The Emperor and The Hanged Man' that Hol Horse was supposed to join the crusaders instead of Avdol coming back.

The animation blew me away. The neon color scheme, the way everyone looks which is faithful to Araki's original work, the way everyone's stand looked... Beautiful. It's fluid, full of color, and goregeous.

The music and sound design were absolutely mind blowing. Hats off to the music team especially because it fits the series so well. Everyone's dialogue was of course over the top and ridiculous, but would you expect anything less? Everything was made better with something in English *cough Joseph cough* and the one-liners and jokes had me laughing every time.

Overall, people may hate this part compared to Battle in Egypt because yes, this part does have a rocky start, but gets better as it goes on.

Stardust crusaders was the best part for me and i thought it was amazing. Refrencing phantom blood i liked a lot. DIO was amazing aswell. watch it yourself 10/10

I'm not sure why the first and second season of Jojo: Stardust Crusaders is split into 2 separate series. Therefore, I'm going to post my big picture review of Stardust Crusaders, then move onto this first series specifically.

To sum up that video: The plot is fairly stupid. If you've played Castlevania: Any of them then you get the idea. Kill Dracula. But his name isn't Dracula, its Dio. Oh, and people can gain the power to manifest their fighting spirits into supernatural avatars known as Stands.

That premise is what drew me into Jojo initially. To me it seemed like fighting these quirky Stand abilities and the main cast having to find an unorthodox way to deal with them. And while Stardust has that, technically, it doesn't do much with that core central idea.

As I said before, there are exceptions to be sure. But overall, Stands and their abilities are rather underwhelming here, and most of this first season feels disposable as a result. But I sat through it because hot damn was the animation work great here. Stardust is vibrant, leaping straight from the 80's with a fantastic neon color scheme. I can't think of many...ANYTHING, that has canon alternate colors for almost the whole cast of characters. And yes, it sucks how many problems are solved with Star Platinum bashing in the monster of the moment, but at least it looks fantastic. Also I give genuine props to the sound and music team, the music is fantastic and it ties the production together.

Overall, the second season fixes much of what went wrong in this first season. But, to sum up this first half of Stardust Crusaders: Its a story with a dull, stupid plot made up with fantastic production quality. And once things get to Egypt, well, I'll save that for the Battle in Egypt review.

I first came across the series as a whole after watching two Let's Players play a fighting game for this anime.  They were really excited about it and had nothing but praise for it.  So I thought that I should just check it out.  Although this is a continuation of the series as whole, it's practically a whole new show with some background info.

The story takes place many years after the previous season.  It follows the bizarre adventures of a new JoJo, Jotaro Kujoh who is the grandson of the previous JoJo, Joseph JoestarJotaro is first seen in jail and refuses to leave feeling he's been possesed by an evil spirit.  Jotaro's mother, Holly, calls upon Joseph, her father, to talk Jotaro out of jail.  After arriving with his friend Avdol, they convince that this "evil spirit" is called a Stand, a psychic manifestation of the user's bodily energy.  After some catching up, they find out out that the mortal enemy of the entire Joestars family lineage, Dio Brando, is actually alive and has been resting for 100 years after stealing the body of Jonathan Joestar, Joseph's grandfather.  Together they travel to Egypt to stop Dio from taking over the world.  Basic action stuff plot.  Not only is it full of hardcore and epic action, there's a ton of comedy in between.

The same animation style applies from the previous.  If I were to describe the animation in one word it would be "overexaggeration".  It's not overexaggerated in an obnoxious way.  I feel that the show already knows what it is and just plays it up.  One thing that's always present is the use of different neon color palettes during some intense scenes.  Action scenes are pretty good as well.  There's also the character design.  There's no clear way to explain it.  Everyone is absolutely rippling with gigantic muscles that would make Adonis green with envy.  The homoeroticism is blazing through the roof.  However, that's just the JoJo's Bizarre Adventure style and it's cool I gues.  Another thing is posing is mandatory.  Just imagine Ginyu Force posing and that's what you get here.

The most notable thing in the sound department is the voice acting.  To be more specific, the voice acting of Joseph Joestar.  Like I said about the animation, it's extremely overexaggerated but that's what makes it funny.  Just hearing Joseph scream, "OHH MY GOD!!!!!" is just hilarious.  Also love the opening music of this show.  It's just as epic as the show and really gets you in the mood for some good action to come.

I'll start with the main character of the series, Jotaro Kujoh.  It took me a while for him to grow on me.  I mean he called his mom a bitch.  Who does that?  He has this extremely tough stone-faced facade but in actuality, he's pretty clever, caring and loving as he's willing to risk his life to his mother.  Jotaro Kujoh is, by far, the coolest anime character I have ever come across.  Oh yeah.  There's other people too.  He's surrounded by a great supporting cast.  There's his grandfather Joseph to be his mentor.  There's Jean Paul Polnareff for comic relief.  Like I said, great characters all around.

If you just finished the 1st season and not so sure about the next one, watch it.  It's practically the same but with just new characters and the concept of Stands, which is used later on in the entire series.  However, because of the whole new Stands concept, newcomers can start on Stardust Crusaders and it'll be fine.  I'd recommend some light background checking and that's it.  Great action anime as a whole.  No complex storylines.  Just "there's a bad guy.  Beat him."  To keep it from being just a regular action anime, they applied a nice gimmick with stands and just it well.  Can't wait for season 3!