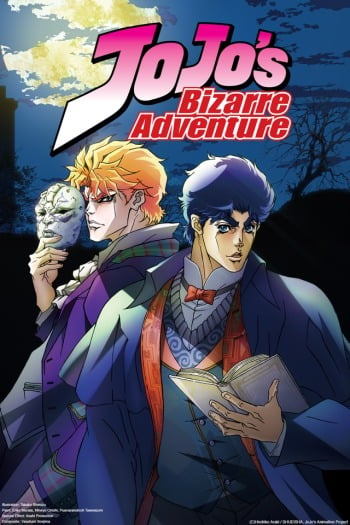 Upon arriving in Windknights Lot, JoJo's group is pickpocketed by a talented young boy named Poco who JoJo and Zeppeli manage to catch using their ripple powers.

Forget for a moment that JJBA is a martial arts anime with horror undertones while TTGL is a mecha show. There are some qualities that both shows share, which has prompted me to make this recommendation. Fabulous animation, overtly masculine, great animation, a fun cast of characters, both heroes and villains, and pure unbribled awesome. These are all things that both shows have, and if you liked one you should really try and watch the other show.

If you enjoy grandiose, epic, time-spanding anime with over-the-top action and memorable characters, check out either JoJo's Bizarre Adventure or Tengen Toppa Gurren Lagann.  If you've seen one, you will most likely also enjoy the other.  Both anime come away with characters that define masculinity and epitomize manliness. Both anime feature at their plot nothing less than the saving of humanity and the everlasting struggle of good vs evil. (JoJo deals with eternal vampires, while Gurren Lagann deals with the cosmic anti-Spirals). Both have vivid animation and a similar have-fun-while-being-a-hero feel to them. If you cheered on Simon against the odds or rooted for JoJo to finally beat down that bad guy, then I think you should definitely give the other a shot!

Oh so manly, what with the pointing of fingers, random power ups and ny-unstoppable villains. Oh, and the clear display of muscular bromance.

If the action, drama, and rippling muscles kept you on the edge of your seat for one of these anime, check the other.

Both action shows feature burly, manly men fighing against equally buff villains. Both also are quite cheesy (in a good way) and have a penchant for overdramatizing, though Jojo is fairly stylish as well. While I liked Jojo more than Hokuto no Ken I think fans of one will definitely like the other.

Both have the same style of characters, fighting, and overdramatic dialogs. They also portray friends & enemies in a similar way.

The first part of Jojo's bizzare adventure was inspired by some parts from fist of the north star. Kenshiro and Jonathan bare similarities like both characters usually had a really devistating punching technuqie

If you like Keijo!!!!!!!! or Jojo series, you will probably the other just because of the very similar (and funny) concepts in battles scenarios

Both are incredibly over the top anime fill with insane epic battles that are crazy, funny and just fun to watch, both anime will have you on the edge of your seat.

If you enjoy Keijo, you will indeed enjoy Jojo series equally if it's one way or another. Both have amazing concepts maybe even similar, they're both funny shows and I absolutely adore them both, lovely muscular female/male characters. Lovely shows!