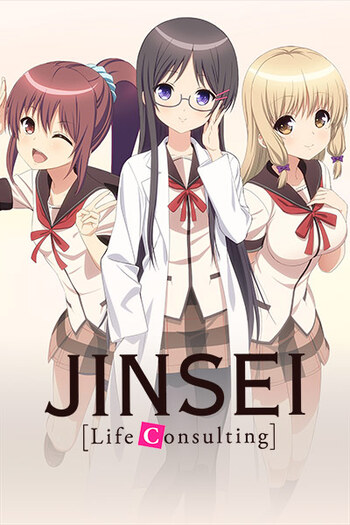 Let´s be honest here... The story isn´t all that great... It actually doesn´t really exist. There are some slight hints of romance between characters, but it feels more like 11 out of 13 episodes are fillers. Still, it can be really funny and it has some interesting, although trivial ideas.

It´s quite simple, but really nice. It´s beautiful, aside from the weirdly looking main character.

Nothing special, but it´s not bad either...

If you are looking for some characters with deepth, then you are looking in the wrong direction. They are in fact pretty shallow. They are defined by few characteristics, but at least their behaivor is consistent. I think this character design works really well with this type of anime.

This anime is really good if you just want to relax. It really isn´t something, that would have you sitting on the enge of your seat, but it is still really lovely experience. As my friend would say: "It´s an anime for a rainy afternoon.

*This review contains spoilers* I highlighted some of the more important points in bold so you could get through the review quicker. Well, it's finally time for another review. Be prepared, this is going to be a long one. You know, this show, and how I felt watching it can't be explained in just a few paragraphs. This show, from an objective standpoint, it's not good. There's unnecessary fanservice, the dialogue, though it does improve later, is not very good, and the anime itself can't decide whether it wants to be episodic or have all the episodes tie together.

But, you know how sometimes something is terrible but you enjoy it anyways, like that corny song you just can't help but laugh at? That's Jinsei. This show works when it makes no sense, when things just happen without any reason, when the show just goes full random and doesn't try to be coherent. There's a story here, and it's flimsy, but hey, it's kind of funny. This show is held together by a solid main cast. They are the glue that prevents the popsicle stick tower from collapsing (sorry, I couldn't think of anything better).

Before I talk more about the characters, let's talk about the story. Yuuki Amakatsu is our male protagonist. He's not the most interesting protagonist and his character and role can be mostly forgotten. He joins the school's Newspaper Club and acts as sort of the lead host of the group. Also in the group are 3 girls who represent different tropes and personality aspects. Rino represents the scientific aspect of things, and thus her answers to the questions are scientific-based. Ikumi represents the athletics perspective, while Fumi represents the humanities aspect.

Most of the episodes are spent with the main cast answering questions that other students pose, with some episodes delving into the personal lives of our main cast. Strangely, we don't learn much of Yuuki's background or Rino's background. I have my own theories as to why this is the case, but it'd be pure speculation on my part.

Anyways, towards the end we begin to have an overreaching storyline. Ayaka Nikaidou, the Student Council President and thus the overseer of the Newspaper Club, has lost her presidential role in an unfair election to Kaori Shirakawa, who is selfish, conceited, and wants to destroy the Newspaper Club's existence. The final 5 or so episodes see the attempts to undermine Kaori and save the club take place, while a new girl, Emi, who offers opinions from an artistic perspective, joins the club. More on her later.

Like I said, the story is somewhat confusing. I don't know why they took so long for there to be a central storyline, when everything prior was more episodic and loosely tied together. However, I will say, I like how each of the girls offers opinions from differing perspectives. Some of the group interactions were hilarious as a result, as were many of the responses. So, I guess you could say I viewed it favorably, but only just, as there were a number of flaws.

The animation is nothing special. It's sort of bland, character designs are fine. Backgrounds are meh, visuals are meh, let's give it a 4.5. I think 5 is scoring it a bit too favorably when the animation was just whatever.

Anyways, let's discuss the characters. The characters are the fun part of this show. There's a hilarious chemistry between the main cast. For all you basketball fans out there, you'll probably get this comparison and understand where I'm coming from with this.

Our main cast reminded me a ton of the guys on Inside the NBA, a popular basketball show beloved by many for its chemistry and fun nature and just plain silliness. A lot of times the discussions don't make sense, but the guys look like they're having fun and so we all just enjoy the show and laugh along with them. Anyways, Yuuki is sort of like Ernie Johnson (the studio host of Inside the NBA). He's the guy who reads the questions, and kind of gets dragged into the silliness as well. Fumi is like Kenny Smith, the most level-headed of the trio of analysts, but also the one who gets forgotten easily. Rino is like Shaq, somewhat narcissist and proud, and can struggle to take criticism. She has flaws but doesn't want to admit them publicly.

Then you have Ikumi, who is a ton like Charles Barkley. Much like Sir Charles is beloved for his random nonsense and whitty retorts, Ikumi carries this show just because of her airheaded nature, the fact that her jokes land more than pretty much anyone else's in the show, and she just lightens the show up with her antics. She was easily my favorite character, and without her I doubt the show would've been nearly as watchable as it was.

Finally, let's talk about Emi. Her character is just whatever to me. Sometimes in the show she provide rational, well-thought-out opinions. Other times, it seems her character exists just for fanservice. There's really no in between with her dialogue. It's either very good, or incredibly stupid.

Some of the lesser characters are alright. Mari (who heads the Occult Club) was cool. She has a very limited role but in the screentime she did get I liked her. The same can be said of Kimie, who is a foreigner with a thick accent and strange vocabulary. She was cool as well. Ayaka (the overseer of the Newspaper Club) was alright, but didn't stand out. The 2nd Newspaper Club and their respective members, I wasn't a big fan of them. Their jokes didn't land like Ikumi's. Some of the early episodes give a spotlight to lesser characters (I liked Fumi's grandfather, conversely, Koganen, who is Ikumi's childhood hero, was creepy and I thought the show would've been better without him).

So, would I recommend this? I would, if you're looking for something so bad it's kind of good, or just want a quick laugh, or a show without much structure. I know the scores I gave for the individual categories don't average out to my overall score, but I think a 7 is more accurate of how I felt watching it than a 6.5. This was fun, in the same sort of way the The Room starring Tommy Wiseau is. It's objectively not a good anime, but you can't help but smile at the nonsense and silliness this show provides.