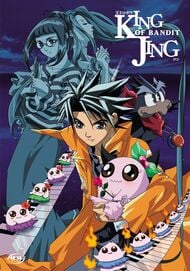 StoryJing is 100% episodic. There, I said it. If you are reading this and are suddenly not interested, stop reading now and go pick up Juuni Kokki. Else, let's continue... Jing is the world's best thief and is known for his desire to capture the most beautiful and unique treasures in the world. His pal, Kir, is a talking bird who loves the women, and follows him wherever he goes. King of Bandit Jing follows Jing and Kir as they travel to various towns and places, as they try to steal a different one-of-a-kind treasure. As mentioned, this is an episodic series. There is no central plot, and really, nothing that ties the episodes together, except for the mention of Jing's mysterious crystal that he carries everywhere he goes. There are some episodes that are mini-arcs, one being two episodes in length, and one being three episodes. Besides this, it's sort of like watching Kino no Tabi -- you see a different story each time, but it still ends up being wildly entertaining. Really, that's what it all comes down to: the humor. Jing succeeds because of how utterly hilarious it is on just about every aspect. While other series are full of random comedy, Jing excels at being the most relaxed and laid back random comedy I've seen. The randomness is fairly extreme, but there's a coolness and calmness about it that make it even more amusing. Hell, the first two minutes let you know what kind of a show it will be (I won't spoil, but it's hilarious). I knew after those few minutes that I'd love the show. The characters and animation style contribute to the humor as well, making the story lighthearted and comical all at the same time. I marked down two points because it definitely would have been nice to see more about Jing's crystal or other things about himself, though some of these things are explained in the Jing OVA. The ending was very open, yet fitting given the style of the TV series. All in all, I really enjoyed the "plot" of Jing, even though there wasn't actually a plot at all! AnimationI loved the animation style of Jing, and haven't seen many things like it. It's completely cel shaded, and not a lot of thick black lines used anywhere. The colors are extremely vibrant and interesting, and in general the animation has a very fun and crazy style to it. The character designs and townsfolk/monsters are very humorous looking and have their own quirks. Things like the city designs really impressed me. For example, there's a two arc story about a town full of clocks (check out the Jing theme here on the site to see it), and it really reminded me of something Tim Burton would have made. Also a heavy favorite are the cute little bomb-animals (also in the theme) who really are ridiculously cute for a reason. The only aspect of the animation I didn't enjoy was Jing and Kir's transformation sequence. It was fine the first few times, but like with shoujo magical girl shows (THIS ISN'T ONE, don't worry), the transformation is identical every single time, which gets annoying. SoundThe audio for Jing is extremely fitting, more so than most series out there. I can best describe it as electronic and synthy beats, but very quirky and random at the same time. Sometimes sounding totally off key or even wrong, the music helps give you that feeling of pure randomness and confusion, which helps a great deal. Also used frequently was a particular rock song (the title track). It was played during most fight scenes or badass scenes in general, and was a favorite during the transformation type scenes. CharactersJing and Kir are really the only characters we are introduced to, and they aren't developed at all. Regardless, they have a very solid personality, and that's what nets this such a high score. Kir is a completely womanizing bird who literally wants nothing more than to woo the ladies. Jing is cool, calm and collected, and knows he's the man as far as thievery and treasure hunting. It sort of reminds me of Grisham from the original CSI series. He's damn good at what he does, but he doesn't act high and mighty. He's kickass in a very disarming manner, which makes his character great. Same with Jing. In addition to these two, there are tons of very amusing characters throughout the entire series in each location. Villians are always comical looking in some way, and are wacky and quirky. Even the most minor of characters usually has a funny line to say or something to contribute to the ambience. I remember at one point, Jing is standing next to a HUGE HUGE man and is able to make some sort of wisecrack about him. The man was only in the series for about 15 seconds, but still contributed in a hilarious way. OverallJing is one of my favorite series, and sits happily on my shelf in its shiny box set. It's random comedy at its finest, has great animation and a super fitting soundtrack, so you can't really go wrong with this one. Bear in mind that a lot of people don't like Jing specifically because of the episodic nature, but the answer to this should be obvious: DON'T WATCH IT IF YOU DISLIKE EPISODIC THINGS! For everyone else, Jing is a fun and entertaining ride...

I will admit I have a thing for outlaw type stories. I like reading and watching anything that has to do with thieves and assassins. I saw the name and decided to give it a try from the name along. I recalled seeing the Jing’s character design once in the distant past, but other than that I went in blind. I wasn’t really impressed in the beginning, nor was I particularly satisfied when the last line of credits scrolls on the final episode.Story: 4/10So I found out pretty quickly that the whole story is basically a teen with his feathery partner going through a city to steal whatever valuable items are there; and winning the heart of some lady along the way! This happens every.single.episode.Now repetition is fine for children’s shows, and when you only see an episode about once a week or so. This is because the story doesn’t get as old as quickly. However, binge watching this show was extremely hard for me because it had the same pattern for the entire 13 episodes. The show was episodic as well, meaning that the episodes had no connection with each other, with the exception of the last 2-3 episodes, as the last heist of the series was told throughout those episodes. Needless to say I just got bored with it halfway through, and I really got no enjoyment out of it in the end. It played off the same mechanics, with a bit of comedy thrown here and drama thrown there. Art and Animation: 6/10 If I could give just one word to describe the art in Ou Dorobou Jing it would have to be “outdated”. The show was released in 2002, and it clearly looks like it. This isn’t a particularly a bad thing; the style is pretty classic for a shounen of the time (and it makes me feel nostalgic). However, it’s not aging well nearly 13 years later with the rigid lineart and bright colors. The animation is nothing special either, pretty stagnant scenes throughout the show. If you are a person that is really into art and animation then this won’t give you a very great aesthetic experience. Sound: 5/10 I honestly can’t remember a single moment while watching this show where I stopped and appreciated the sound quality of the show. The background music in the series was pretty forgettable; the opening was a classic mild jrock that was appropriate for the show in my opinion, which was carried over to the ending in style and essence. They both had recognizable and somewhat catchy beats, but again it was nothing impressive. As for the voice acting - I only watched the english dubbed version. 2002 was when dubs were still pretty bad (but improving) so if you watch it dubbed you’ll notice some misportrayal or underemphasis of emotion, annoying voices, and overacting. That being said I thought that it was translated well enough and the recording quality was better than some other shows that I have watched. Character: 5/10 The characters were pretty bland throughout the show. Everyone in the series with the exception of Jing and Kir were only covered in one or two episodes, which didn’t allot much time to background stories. In every episode there was one girl that had her own backstory and was supposed to be the “love interest” that always ended up liking Jing by the end of the episode. These girls were basically all the same in my opinion, and I just did not care about a single one of them.Jing and Kir are the protagonists of the show, which means you would think that you would watch them grow and develop. Well you would be wrong. I will admit that there is something to a lack of backstory for a protagonist - it makes them mysterious, and we must accept Jing is a well known bandit king and take it with a grain of salt. This frees up time to show off what Jing and Kir do best: steal valuables and do it well. However, the two never grown beyond more than a quirky and comedic duo who are good at stealing. They run into mild conflict in every episode, but nothing that creates a lasting impression of Jing or Kir as characters. This left me a little disappointed. Overall: 5/10 It wasn’t good, it wasn’t bad, but it wasn’t what I was expecting. The show felt more or less “filler” - esque and about halfway into the show I was just done with the repetitious story. There was nothing in particular that made me want to continue it other than the fact that I didn’t feel it was bad enough to drop completely. This combined with a lackluster ending left me feeling almost cheated out the time I could have spent watching something that I really would have preferred to watch. 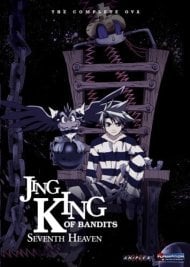 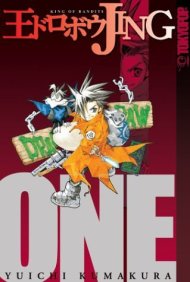 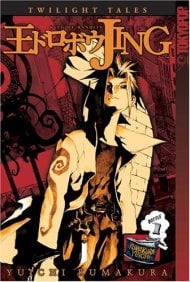