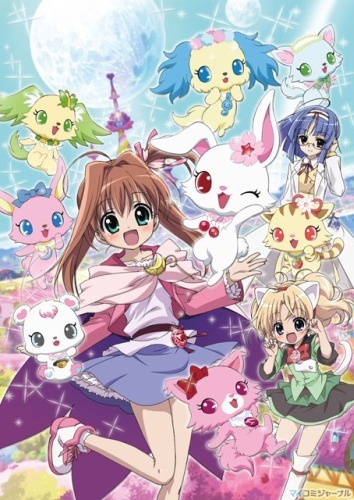 I liked how they did the story. Just a short review. Akari meets a jewelpet, Ruby,  who actually studies magic and decides to do it with Akari. Who later both study magic also with Labura(so cute). Akari likes somebody who's sister has powerful magic (though Akari beats her in the end) and also.. spoil..(Akari wins the completion, becomes a jewelstar, and the one who she likes,Yuuma confesses to her on Valentines) But-it was so sad there was no so severe romance.

After watching Lady Jewelpet I turned into a jewelpet/ magical girl junkie. That's when I found this anime. After watching a few fps, I still continued because it was in the jewelpet franchise.

But after the MC ( can't remember her name) met the sister of her love interest and when I found out it was a GIRL not a BOY( r.i.p love interest), I gave up. There's no heavy or even middle romance, it's like it's just added there to draw in users.