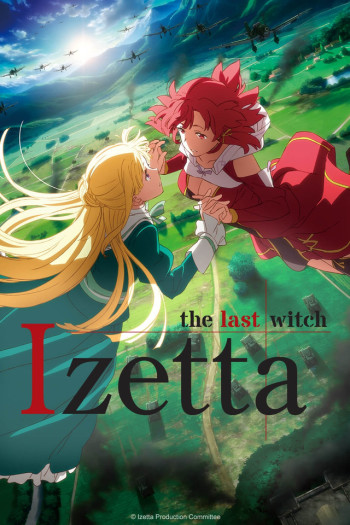 I started watching this anime because of the lovely animation and what looked like an interesting setting. As a matter of fact, the first episode isn't too bad. But then it just isn't interesting. Really nothing special. Even boring at times. A dull and predictable story that didn't manage to draw me in. Clichèd and not developed characters who left no lasting impression and whom I couldn't relate to. So, I wouldn't really recommend it.

The story is kind of an alternative narration of WWII if witches and magical powers existed and the rulers of the countries at war could somehow convince them to use their powers as weapons of destruction. You've got the bad bad bad Germanian Empire set on achieving world domination and the small Elystadt - located in the Alps, more or less in the vicinity of the modern day Austria - governed by the lovable and righteous, altruistic noble and honorable young Archduchess Finè. While still a child, Finè meets a little red-haired girl, Izetta, who is probably the last of the witches. They develop a really deep bond of friendship and for this reason, when the Germanian Empire threatens to invade Elystadt, Izetta decides to help Finè defend her country and pledges to fight along her side. The storyline becomes more dramatic when a second legendary and very powerful witch makes her appearance, fighting obviously for the Germanian Empire. This is the story. You could probably say it's the story of a friendship and of the fight to create a world of peace against a cruel tyrant bent on world domination. But, once again, it's quite boring. And Izetta flying in the sky on a rifle or a machine gun (or whatever it is) instead of the more conventional broom, is a ludicrous sight. Finè's and Izetta's friendship story was surely meant to move the viewer, but it just lacks the ability to emotionally involve. Same goes for the characters. No development. Very little backstory. The only one whose past is narrated, is the witch Sophie; but - SPOILER ALERT - she's a clone, so I really don't get how the wicked Germanians can make all those new bodies for her while her personality and memories remain unaltered and intact. It's as if the creators put labels on each character (Izetta is the loving faithful and willing to die for friendship FRIEND, Sophie is just looking for VENGEANCE, the Germanians are plain EVIL, in Elystadt everyone is KIND and GOOD-HEARTED, etc etc) and stopped at that, as if it were sufficient to make good characters. Well, it most obviously is not.

Overall, it isn't a bad anime. There's a story that is developed in the 12 episodes and then gets an ending. But I don't recommend it. Both the characters and the story lack depth. So watch if you really haven't got anything better lined up.

This was an entertaining show, fun might be a stretch though.  Studio Ajia-Do has crafted a wonderful concept and made a fairly average job of it.
Firstly all the characters dialogue tends to consist of choppy canned lines that seem to be only there to explain to the viewer what is happening. It isn't convincining in the sense that these would be conversations that real humans would have.

I refer back to the last episode where Fine' meticulously explains how she plans for Izetta to deafeat Sofie in a very dry manner in front of the allied forces  AND the Germainians. Talk about revealing your hand just for dramtic effect.

The thing with Izetta is that it has a knack for removing you from the immersion.
The Derpy animation (No sense of lighting or shadow filters either, it's like they had the show o nfull brightness and saturation) paired with the rote delivery of dialogue makes all these characters seem so Cardbord-like they could be blown over by a gust of wind. There is no sense of disbelief, you are constantly aware of how heavily-2D everything is.

It's like they lost the character sheets for specific scenes and they just end up looking like Mr potato head with eyes and noses haphazardly attached in a skew fashion. Especially in the medium shots of Izetta.

Although the 3D-CG was done much much better. A strong point for the series.
The music I had a good time with, it reminded me of wolfenstein a bit. It fits the setting perfectly. Although it starts to become repetitivce around the ninth episode.

Now i'm a firm believer that this should have been a 25 episode show, becasue you can't tell a lucrative war-story in just under fifteen episodes. The pacing WILL suffer. Izetta did manage to keep it's story on a steady path, but this safe approach didn't make it exceptionally captivating and rather quite predicatble, more so when Sofie is introduced. You can pretty much solve the outcome of their clash from there.

It really jumps the shark when it all comes down to some "Spirit Bomb" powering up moment. Which wasn't what made the show good. The good parts were when we see the ground troops persective and how Izetta interacts with them. Not Super Saiyan Witches.
Upon finishing I feel as if maybe 3 episode were worth it and the rest was just the Nazis doing their plotting, Izetta doing something fanservicey in the castle and just genral exposition-heavy set up.

There first three episodes are the strongest, Ranked from:
2- Had the most charm and the best choreographed battle
3- Best showcase of Izetta's power and interaction with troops.
1- A Solid prologue that establishes the world nicely.
Everything else is sparse on emotional impact.
I'd give the show a 6/10 a Noble effort, Good concept, but just a bit mishandled.
It never really takes off unfortunately, that one point where it the quality and direction of the show becomes clear. (Like Re:Zero Episode 15)

Best anime I have ever watched. Every episode is filed with joy, drama, comedy and loads and loads and loads of awesomness. Epic explosions, heart breaking romance, just beautiful characters, rich with personality. There are tons of twists in already engaging and intellectual plot, spiced up with realistic setup combined with intriguing imagination. But realy, what tops it all are incredibly polished thoughts, providing us with totaly different view on war, nationality and morality.

I would definitely recomend this anime to anybody who is looking for something to think about, and even to those who just like action or emotion, becouse this anime has it all.

Well after watching it, this anime is really nice, but there are some things, that i don't like.

The Story is well thought through and it seems, that everything happens for a reason and nothing is some kind of wasted time. There are no fillers in there. The setting is World War 2 and has some magical elements, which are really fun. But in my own opinion WW2 was not that fun for any country. I heard many time the stories of my grandparents, that have been in WW2 on the german (Germania) side and they just hated it. It has been really sad. This is why I can't give much points, because it is somehow a fun story with a really sad horrible background.

The story was overall okay, but predictable. Everything that happend was very obvious to happen. So it was not bad but even not good. I would like to say averange.

The Animation is very nice and there is nothing significantly negative occouring to me. The Sound is very nice and I always sing along with the opening melody. (This is something, I usally don't do!)

The Characters are well designed: we have a very humanitarian princess and a very loyal( toward the princess) witch. So the loyal witch did everything to help the princess. She did everything for her friend and would even give up her life. So what could have been happend?