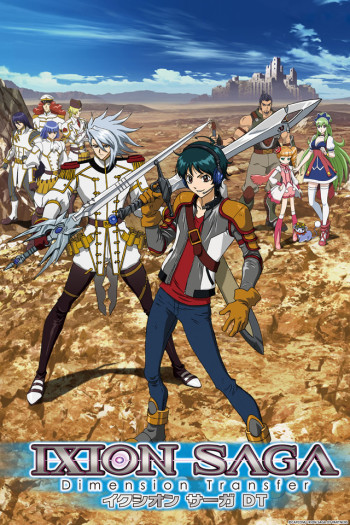 THE STAFF
- Animated by Brain’s Base, a studio with very good production values and a mostly mediocre roster. Their best works to date are Baccano and Penguindrum and even them were just lively and colorful but not exactly masterpieces.
- Directed by Takamatsu Shinji, who has directed numerous famous anime throughout the years (Gundam Wing, School Rumble, Gintama) and has experience with many genres to boot.
- Based on a videogame by Capcom. I haven’t played it but it seems to be mediocre, just like most of what the company does outside its usual fighting games.

PROPER MINDSET
Ixion Saga is a parody of JRPGs, thus half the time it makes fun of the various stereotypes they have, with added meta-humor by the protagonist who loves to break the fourth wall and compare everything to games. So you sort of need to be a gamer to get what they are talking about. Half the OTHER time the jokes have to do with… balls. Male genitalia that is, from transvestites, to those with problematic erections, to those who lost their family jewels. It becomes unsettling and repeats too often to the point it may drive away those who are not into gay jokes or penis jokes.

SCRIPT
The story is about a gamer (fad of the year; we got 4 shows with gamers in a short amount of time) who gets magically transferred to a videogame world. He is immediately added to the group of bodyguards of a child princess, who is chased around by an opposing army. Being a parody means that you must not expect much of a plot, since it’s all an excuse for making fun of stereotypes. Most of the episodes have completely random plots and some of them don’t even feel like they take place in a medieval setting.

Directing and pacing are not particularly good, as they feel sloppy to the most part. Although most of the jokes are ok, they are presented in a slow and dull way that takes away most of the impact they have. They are also trying to stretch a scene to last as much as possible and even repeat the same jokes three times in a row, so things become repetitive and boring fast.

CAST
The characters are nothing much to talk or remember for, as they all have a very simple personality that can be described in two lines with an added quirk in their personality to make a running joke out of. As it usually happens with one-note characters, that gets old rather fast and you stop caring.

PRODUCTION VALUES
It a low on budget production so many things look and feel crude. There is not much of a detail given to character designs or background decoration, and even the explosions look like nothing more than dull fireworks. Many motions feel stiff and slow, while the fighting scenes are short and simple, usually resolved in convenient ways when the episode is running out of time. The only aspects that I sort of liked were voice acting and soundtrack, which are dynamic and lively despite the mishaps in the budget.

LEGACY
In all, it is a mediocre time waster. Some of the jokes in it are quite good but there is simply not enough passion in it to make it feel interesting for more than a few episodes. You just end up not laughing or caring out of lack of creativity or unpredictability. If you want to blame someone, point at Capcom for giving up on trying to make good games.

STORY SECTION: 3/10
Premise 1/2 (simple)
Pacing 0/2 (random)
Complexity 1/2 (not much outside the references you should try to understand during the meta-humour)
Plausibility 0/2 (none)
Conclusion 1/2 (meh)

CHARACTER SECTION: 4/10
Presence 1/2 (generic)
Personality 2/2 (cheesy but well founded)
Backdrop 1/2 (generic and simplistic but it’s there)
Development 0/2 (none)
Catharsis 0/2 (none that matters)

VALUE SECTION: 1/10
Historical Value 0/3 (none)
Rewatchability 0/3 (it gets repetitive too fast to care about rewatching it)
Memorability 1/4 (some of the meta-humor is ok but in all it is nothing much to bother remembering)

This is silly and ridiculous. I loved it. It doesn't take itself seriously and mocks all the isekai nonsense. The characters over over the top but still endearing. And the Bishie rivals are good eye candy. They give me the Gintama vibe.

Fairly standard isekai with a teen protagonist full of incompetance, constantly yelling. The characters that are shown to be capable, are conveniently stupid when the plot calls for it. However, as much as i wanted to hate this show, it has some genuinely funny moments and some decent character developement. the series could stand to be around 5-7 episodes shorter. it isn't awful, but there are far better shows in the genre out there. works best when considered as a parody, but i would still think it's weak.

Its a fun show to enjoy on your free time.

Its main cast is not to uniuqe for a P.I.S.W (person in strange world) but the villins are far more interesing then a standard P.I.S.W SPOILERS FROM HERE ON in this show you porbably feel sorry for the villins somthing rare not only in anime but on the small screan but the main villins join the good guys later on so its not as impressive later on.

Plot WITH SPOILERS in a nutshell

A gamer gets sent to a strange world that at times is verry similar to our own but ar other times looks like a fantasy world and somtimes its just somthing other. Our main hero has been turnd into a hyperion (this worlds wizzards [i gess]) by the last known Ixion. Ixions are this worlds gods and most of them have disapeard for som unknown reason but one remains she is the one behind sending our main charicter to this worl... Also theres a evil pope and some wierd shit that dosent get fully explaind later on.

Episodes that you should not skip