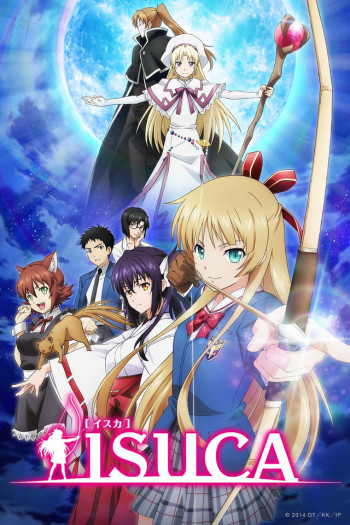 Normally I try to give a show three or four episodes before I give up on it, but I dropped this after the first episode. The premise is kinda interesting, and the art and animation isn't bad, but the fanservice is so excessive that it ruins the show. It was around the point that a demon tiger's lightning attack was fondling the main girl's boobs and rubbing her crotch that I realised the show wasn't worth it.

A good summary from a Crunchyroll comment: "It started out like a modern, reverse Inuyasha, and then the fanservice started."

I gave this anime a try, and i knew i wouldn't be able to watch it all but i still tried.
The start of the first episode was quite interesting, animation is ok. But the fan service, hohoho, no thanks, it killed the show for me. I think it was near the point that the girl was getting raped by the demon tiger's lightning attack thing, that i just stopped caring, before this happened i said to myself, "Maybe It'll get better and slow down the service" but then saw that.

After what I've said, its pretty obvious that (unless you like over-the-top fan service) you shouldn't watch it, so don't waste your time on this.

STORY 5/10: Nothing over the top and nothing to be wowed about If you've watched an anime of this type you pretty much seen it all. Boy meets girl, girl has powers, boy finds out he has powers, boy helps girl fight evil, boy is wanted by many girls. Fairly basic

SOUND 5/10: The Sound is very avarage nothing much to say about it, the opening and ending credits are forgetable.

CHARACTERS 5/10: All very tipical to an anime of this type, not much in development except the slight ones that happen in every one of these kinds of anime.

OVERALL 7/10: OK!!! Overall. you might be asking "Why in god's name did you give Isuca a 7 if across the board you gave it average!?" Well I'll tell you why... Out of all the things I've said Isuca isn't bad but it isn't over the top outstanding BUT it supplies a good ammout of entertainment.

Watching this after a whole sitting of watching Shinmai Maou no Testament (The Testament of Sister New Devil) this is extreamly tame in fanservice/ecchi in which that anime I would concider over the top borderline hentai (borderline in the fact that the censorship maks it so) but anyway back to Isuca. Isuca is fun if you like animes of this nature it's enjoyable, it won't twist your mind like Tokyo Ghoul or be indepth and an emotional roller coaster like Your Lie in April (My god that was such a great anime) but it's a great distraction between mind benders and emotional twisters and lies in the general area in where you just have fun and I'll leave it with this analogy if you're a gamer like me... Sometime you play a game like The Last of Us for a great story and overal amazing creation of a game or you play a game like Dark Souls with it's technicality and in depth machanics and be cause it gives a challange but sometimes you just want to have fun and so you play a classic like Contra or something like Earth Defence Force because you just don't want to think about all that and just want to have fun. That's what Isuca is to me.

The Specters may be fictional, but you'll most certainly have your life force sucked out, while experiencing the ultimate displeasure when watching Isuca.

Ok, like so I dont really like reviews (take a look at the number again, cuz it made me put something). I am not gonna give you a numerical form to someones art, whether you like it or not. However, its cathartic for me, and hopefully entertaining for those who stumble onto this show.

So like I am a guy, very lonely, so I love to watch some of these funny ecchis. Honestly everyone gripes about fan service, I love it. So like yup, you want titties then you get em in this show. However theres like a ratio at some point that like the titties out weigh the plot points. This show...

So like wtf is going on in this show. Theres something called a true name or something. If someone knows your true name you now control that person kinda. Could get kinky, but doesn't really thank goodness. But like it wasnt till ep 8 that they explain, that these mage/exorcists/who the hell knows, that they can have true names too. Like NANI?! The plot makes no sense. In that alone it maybe funny tbh. But the only reason I finished the show was by the 7th ep the titties wore off, and I was like I mean its only 10 ep long. So I just went for it cuz why not. Its like a lot of some of the anime where we get the first season and they didnt sell enough dakimuras of the main chick so thus we don't get any more.

Flat is justice and I learned that smaller titties are more sensitive, so it taught me science.

Show confusing, But boobies. But really confusing, so maybe boobies don't make up for that?