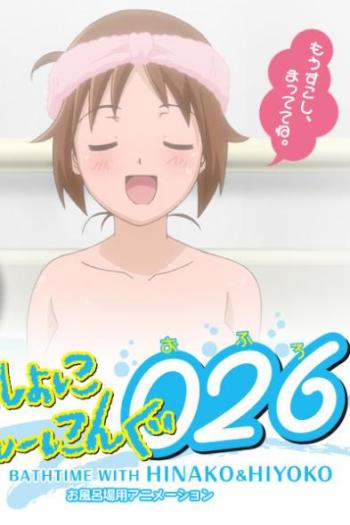 To round out this "trilogy" of OVA's is "Bathtime with Hinako & Hiyoko". That's right, the Hinako series is introducing a second character! (Third if for some reason you count yourself as a character in this series). Hiyoko is Hinako's friend? Roommate? Strangely distant enough cousin to not seem like it's weird that they're having a borderline sexual situation like a lot of fanservice anime does? I don't know how these two characters know each other, and I'm pretty sure that I'm overthinking this.

Basically, the first half of "Bathtime with Hinako and Hiyoko" is Hinako talking to the viewer as she takes a bath and does some stretching and minor exercises in the bath. I guess exercising is the major theme of this whole series.

The second half introduces Hiyoko, who acknowledges that the viewer exists when she enters the room, so I guess that I, the viewer, an entity in this universe that some characters can see, but only when they're around Hinako. I have so many questions as to how this universe exists, and none of them are ever going to be answered.

From then on, it's pretty much Hinako and Hiyoko bathing together and cleaning each other. I guess you could call this the "climax" of the series. Listen, this has barely anything too it, what do you want from me?

"Bathtime with Hinako and Hiyoko" also comes with a bonus titled "Stretch Time" that takes place after the bath segment, in which Hinako stretches in the bath towel she's wearing after getting out of the bath. I guess the studio went all out with this since it not only has the most amount of animation in terms of length, but also in having the least amount of reused frames.

For some strange reason, a microSD card containing the OVA was bundled with the DVD so that people who bought it can watch it on their cell phones. I guess it's so that it's easier to watch it around the house, but I don't see people doing that on their phones. And what kind of person is watching something like this on their phone outside of their house?

Out of the three, this has the most going on, and is probably the best one because of it. And that's totally not me being biased because this one is the closest to actually being spank material.

The artwork and camera angles are only to show these strange little angles for a ‘better view of the training’… ya right. No girl in their right mind would let the camera get these angles if it was not to turn the viewer on. Now on a lighter note, yes… the artwork is beautiful, just used highly to sexualize her is all.

Her voice is annoying as well, the cutesy little high pitch squeak. I really could not stand most of this.

This is just an eye-roller. All it is two little girls taking a bath. I don't see why anyone would like this garbage (unless you're desperate and want to watch). Sorry, but even by ecchi standards this is bad. The only redeeming quality is that the animation is solid.

Pointless, I've seen ecchi that's you know, actually good, but this is not one of them. Not the worst I've seen, but still pretty lame.