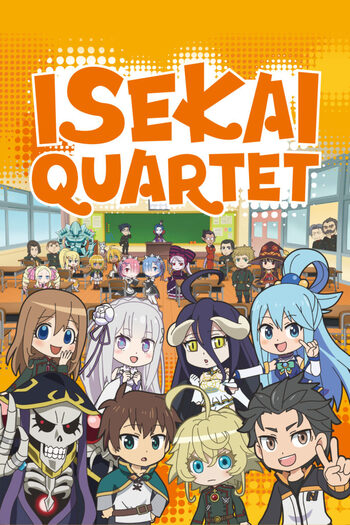 The warriors who have been warped by the rampaging power of "justice" have been summoned into the world of Xanadu. It's up to Dark Fakt, a former villain, and principal Lappi to reeducate these students.

Both of these shows are short episode chibi crossovers where all the characters attend a school. They're parodies of their own franchises and have self-aware humor. Even if you're not familiar with all the series involved,  if you liked one I recommend you check out the other.

Evangelion pilots Shinji, Asuka and Rei, plus Eva Unit 01 and the rest of the gang continue their adventures at a not-so-normal school in Tokyo-3. From passing notes to sleeping or cleaning the classroom, or from ghosts, Angels, meteorites, and hole digging, the gang’s lives are full of random, fun and entertaining events. Just don’t let Principal Ikari or Misato Sensei catch you goofing off or napping in class, or you’ll be in trouble!

Both of these series have short episodes and are about taking exsisting characters, making them cuter, and putting them in school together. Isekai Quartet is better in almost every way, but Eva can also be fun if you enjoy the source material.

Ayu and Mayu, two charming waitresses from the Sky Temple restaurant, are upset. Cast to be mere side characters in the world of Kimi ga Nozomu Eien and Akane Maniax, they're back – but this time they’re running the show! From doing daily chores to playing surgeon, to fighting zombies and aliens alike, follow Ayu and Mayu as they plot their revenge against Akane, Mitsuki, Haruka and the rest of the gang!

Both of these shorts are parodies of their original series. They changed the animation to make the characters look cute and goofy, and then they go on out-of-character adventures. If you're a fan of the related series, you might enjoy both of these.

Get ready for a strange but fun-filled adventure with your favorite group of assassins. The killer class is back but this time they’ve got…magic?! In this brand new spin-off series, follow the chibis of Class 3-E as they learn swordsmanship and sorcery at Kunugigaoka Magic School. Their mission? Defeat the evil Demon King Koro Sensei and face the trials and perils of their magical school!

Both of these are short-episode anime with mostly episodic episodes. They also both have a cast of chibi-fied characters that appeared in other shows. And of course, they are silly episodes and don't actually reflect the tone or characters their main series are based on. If you liked one, you'd probably like the other.