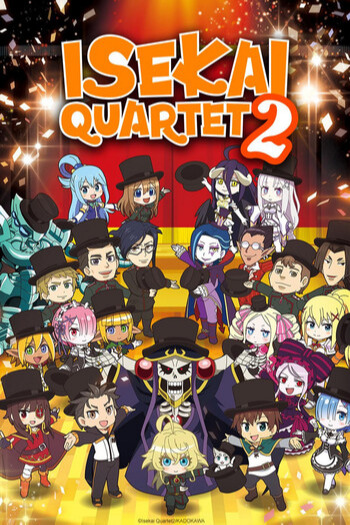 Isekai Quartet is a Japanese anime series that serves as a chibi-style crossover between the light novel series KonoSuba, Overlord, Re:Zero-Starting Life in Another World, The Saga of Tanya the Evil, Kono Yuusha ga Ore Tueee Kuse ni Shinchou sugiru and Tate no Yuusha no Nariagari. The second season premiered on January 14, 2020. The third season has also been confirmed. Isekai Quartet is a crossover between many popular isekai series in one anime. The series is basically an isekai story that focuses on yet another world. Isekai Quartet 2 is a comedy experience that no one should miss!

The first season of Isekai Quartet was easily one of the funniest series of 2019. It takes real talent to unite so many isekai series in one anime and what is important, the anime is something that makes sense and is that funny. The second season, however, focuses on even more characters and the humor that is used in the series is always spot on.

This is almost on Carnival Phantasm level, which is also an amazing parody, by the way. Anyways, while I do overhype Isekai Quartet, I would not recommend you to watch it, if you liked none of the series that are featured in this anime; do not waste your time, you will not enjoy the humor. If you are a fan, however, enjoy the series, as well as season 3 hype train.