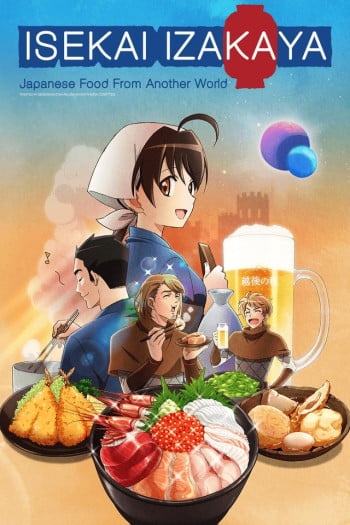 even though there isn't much going on in this anime, it's just an all-around good time, and fun to watch

Iskeai Izakaya is a show that presents itself as a typical isekai restaurant anime, however, it's certainly not something that someone would enjoy if they are looking for anime with a long-lasting plot or characters you will become attached to. This is a show purely about Japanese food. If you have ever watched those traveling tv shows where they visit restaurants and food stands in other countries, and it's basically just watching someone eat and explain the history/preparation of said food; then you will recognize Isekai Izakaya for what it is. It's kind of a tourism anime, and I personally enjoy that sort of thing.

Each episode starts out with our main characters serving one or two new customers in the time-traveling izakaya. They always prepare just the right dish to their (usual skeptical or bewildered) customers and we get a lot of food animation complete. The story is kind of all the same but it'll make you smile or at the very least desperately hungry. The last 5 mins of the show are dedicated to live action segments that either follow a chef as he prepares a dish similar to the one featured in that episode or a man as he travels to izakaya in Japan for similar food. You either get some really interesting recipes or directions to a local restaurant that serves 'Whatsontap' and delicious food.

The story is weak and not really the "point" of the anime, so there isn't a ton of appeal to simply watch this anime all the way through to the last episode. But at 15 mins an episode they are super easy to breeze through and perfect for a few minutes of downtime. The animation and sound are pretty good quality, making all the food look/sound mouthwatering.

I think that the short episodes fit this anime well. I also appreciate that it has a little bit of a story line while focusing on food. It has more of a story line than “Today’s Menu for Emiyla Family” and less than “Shokugeki no Soma”. One really unique feature I enjoy is the Nobu Plus section at the end. Each episode alternates between a cooking lesson and a Japanese restaurant spotlight. The cook and food critic are the same each time which builds consistency.

I don't usually feel the need to put my disdain for a bad anime into writing. It's not even like I expected much from this anime, but it was still a sorry disappointment whenever I watched it.

The problem with this show is that it's literally just a showcase of Japanese food under a thin veil of Isekai in hopes of attracting Isekai fans. It doesn't even try to sell you on anything else other than, "This food is AMAZING. Look at how these people who have access to only everyday mundane food in their world ENJOY themselves in a JAPANESE bar with JAPANESE food!!" This point is driven home wholly when a whole 1/4 of the anime's airing time is spent showing real Japanese food in real Japanese Izakaya looking... real good?

When I compare this to other shows that are similar like Restaurant to Another World/Isekai Shokudou, or Food Wars/Shokugeki no Souma, there is almost nothing enjoyable about this anime.

The few things that are serviceable, are the presentation and animation of the food. All of the budget went into it and the mundane looks of the cast and setting only serve to highlight how amazing the food looks. Honestly the general animation gets a 6 for being consistent within the first three episodes I viewed and the food looks delicious admittedly. It would have been a 7 if the character designs were a bit more interesting at least.

I don't have much to say about the sound. The VAs do a decent job. Nothing amazing. The sounds made when there's food being eaten are pretty nice. That's about it really. So a 5 for being alright.

There is no over arcing story to this anime. The general premise of the show is the story which is to say there is none, but hey at least there's different people eating there to spice it up right. 2/10.

The characters are honestly what blew MY socks off by episode 3. I had originally watched the first episode then came back to this anime a few months later somewhat forgetting why I didn't keep going too eagerly. Nothing about the characters in this show are endearing or believable. I wasn't expecting depth or even a lot of logic, but the anime 100% tossed logic out of the window, or even attempting to characterize anyone beyond making them into devices for advertising Japanese izakaya/bars.

Minor SPOILERS (if these even exist for an anime like this) ahead:

I can accept that nobody bats a huge eye at Japanese writing, or how the waittress or chef are dressed. There are some concessions to be made when you're watching a low effort show about plebs eating average food in order to make average food look awesome. And there's a way to do that in a way that's entertaining, but it's not how this anime does it.

Now I was having an OKAY time watching episode 3 at first. There's an aristocratic Uncle and Niece looking for AWESOME food. Of course they'll find it at the Izakaya no problem there. The customers monologue at how COOL everything looks which is normal.

What ruined it for me was that at some point the Uncle starts monologuing about how woe is him with trying to find DELICIOUS food. He always eats cold food because he usually gets his food taste tested for poison and it gets cold by the time he eats it. And now he's marveling at how the food is being cooked right in front of him and he'll get to eat it as fresh as it gets!

If he usually has his food taste tested for poison, why does he have no servants attending to him to make sure his food isn't poisoned right now?

Why does he not question or gawk at the concept of a portable metal gas stove? Wouldn't he want to question where this sort of tech came from at the very LEAST??

Another problem is he directly questions where the vegetables come from because it's winter BUT he stops questioning it and goes "i am hungry who care"...?? What if these vegetables are smuggled in? You already know the place you're in is foreign as heck, but you're not suspicious at all??

I just had to stop before the animated portion of the episode ended because it drew me out of the anime SO hard. I'm not watching a real guy enjoy real food. I'm watching a writer unwillingly write a guy sucking off Izakaya food for some IRL $$. The level of immersion breaking in what is already such a low standard show is just silly. 1/10 for characters.

tl;dr The characters are devices for advertising Japanese Izakaya/bars.

SPOILERS END (if these even count as spoilers. are people sad when people spoil the contents of an advert..?)

I really enjoyed this anime, binged it on Youtube in 2 days. They are short (but perfect length) episodic food situations where the master has to prepare certain dishes for his isekai customers. I thought it was super fun and enjoyable to watch while eating actually.

Characters were enjoyable, just a quick watch, no crazy plot line. Sad to see low ratings but I loved it!