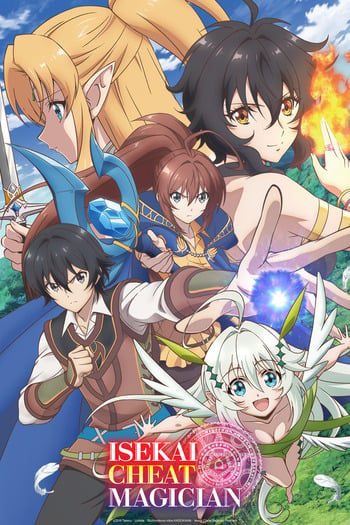 This review will be spoiler-free for anyone who hasn't seen the anime, but wants to learn about it without getting spoiled. While I may not write this eloquently, I hope the review is helpful to whoever reads it.

This type of show is not easy to progress well, because it been done a lot. Unfortunately, while this show does start out strong, it shows cracks and begins to falter as the episodes progress. There are glaring plot holes in certain cases that show the lack of imagination and creativity of the writers. I like the premise of this show and I had high hopes for it, but in an effort to draw things out, they have skipped over some issues and even allowed laziness to take over in many shots.

The animation is pretty good, for the most part. I have noticed certain shots where they have recycled previous scenes, which was diappointing, but not all that uncommon. What disappoints me further, is that some of the recylced scenes made no sense at that part of the episode. It's like they had a scene that worked better, but was drawn poorly, so they substituted a working previous scene to fill in the gap. That's terrible to do and shows a lack of work ethic from the animators. I'm sure there were more factors, but the result is not good and they shouldn't do it.

The story is fine, as it has been redone a lot. What makes this one unique is also fine, as I have made it to the 7th episode. But what bothers me, what prompted me to write this review, is how dumb certain things are. The lazy animation of huge spells, the lazy ideas of huge spells... It's like they thought this up in a few hours and rolled with it. The combination of elements to create the spells should be shown better, but isn't. I am REALLY disappointed with how the 6th episode turned out. When my own imagination can make an explosion look cooler than the animators did, I personally feel cheated. There was so much hype leading to certain scenes, but apparently they were either cut or were never meant to be shown. It's just really poorly done, in my opinion. That all being said, the 6th episode does not speak for the entire anime. The show leading up to the 6th, was mostly great. I will say that certain parts of this show make me squint my eyes and shake my head, asking "why" more often than I'd like. Terrible plot choices plague this show more than it should.

This is where most of my gripe comes in. Taichi is strangely written. He is supposed to have this amazing power, but he rarely gets to show it off. It mostly falls flat or he is held back in some silly way. The side characters, many of them are flimsy and don't have enough 'oomph' to them, for me to care. Rin is probably the most interesting, to me, because she has the most possibility. She can combine elements, with modern education, to create powerful new spells. Rin's character development has told us, the audience, that she is very intelligent and has a fantastic grasp over her suroundings. Rin is probably far smarter than the writers of the show are, because the writers don't do anything amazing with her until the 6th episode (where they totally botch it due to poor animation, in my opinion). There are other characters who feel one-dimensional as well, but I will let you see that for yourselves.

EDIT: After watching the 7th episode, I am even more disappointed. The action sequences are like a kid playing with dolls, there is no pull or true interest. The intrigue and character usage is sloppy and sad. This show went from a 6/10 to a 4/10.

EDIT again: I have dropped it. The anime has dropped every ball they had to hold. It's just a terrbile anime now. Very disappointing.

Final Edit: Somehow, I made it through the whole season, even though I previously said I dropped it. My curiousity was too high, but I ended up clicking the scroll bar to skip ahead of boring/meaningless scenes. I hate this anime almost as much as I hate the dotHack series. It's a close one.

TL/DR; This show has some really great parts that make it a solid 6/10. But there are far too many problems with animtion, story decisions, and character development that cause it to fail completely. I would give it a 0 star rating for every episode after EP 6. EP 1-6 are pretty fun to watch, sorta. But because they screwed it up so bad, it creates a higher disappointment than if it were bad all the way through.

Generic trash that people watch, even though they know it the same anime with the same plot done with little to no budget to make it unique and stand out. :/ watch this if u trash like me :D

All I can say is don’t waste your time .

I definitely enjoy the trapped in another world animes! if you like the genre then this anime is actually really great. Nice animation and simple but interesting storyline. Why is everyone hatin? lol.

very similar to other animes of the same genre but overall I loved it.

This must be the worst anime I have ever watched. Story could have been written by a 7 year old, mc is not even generic anymore since generic chars at least have some good things in common. Every character has no depth, the story follows no line and everyone is acting like everything that is happening happens out of a known fact. Ass pulls making him even stronger and stronger without any reason. Random enemies without a reason (at least we don't know them) to attack him. And a cliffhanger that doesn't make you want to know any further information. That's how bad this anime is. If you haven't started watching, don't do it. Literally any Isekai is better than this one - no, literally any anime is better than this one. At least the animation was not so bad.