Is this a Zombie? - Reviews 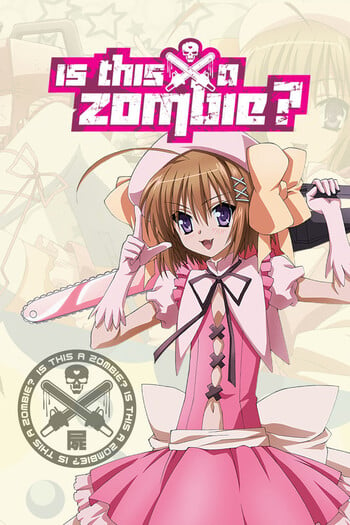 Kore wa Zombie desu ka? was a series with potential that unfortunately dissapointed.

What started out as a hilarious, over-the-top anime just kept ramping up for the first few episodes and sort of became stale in the second half. What started out as whacky and funny became stupid and repetetive. The series just kept pushing the limits of stupidity until I just couldn't stand it anymore. Lady Zombie Vampires with huge knockers and barely any clothes fanservicing like crazy? Fine, whatever. It's a rule that said vampires are instantly married to whoever they first kiss? Oh, give me a freaking break. It gets even stupider form there. By that time, I couldn't help but roll my eyes as any scene trying to be remotely serious.

This anime isn't so terribad that I completely regret watching it. It's not a complete trainwreck. But I wouldn't reccommend it. Your time is best invested elsewhere.

this show is a mess , it started ok , but then spiraled down to forgetable , but i guess i should have expected as much from studio deen , why are these people not bankrupt and manglobe is ? astonishing but none the less i should probably explain why i rated this so low

story , the story had a decently strong start ,our main charcter who is now a zombie or an imortal being not a zombie and he wishes to find a cerial killer , aka the one who killed him witch i would do to , now for all you moral high ground people , think of the last time some one hit you or pushed you , you got angry for a split second , so ifsome oen murdered you , you would wanna kill them back , and i liked that about the begging , but the paceing every thing is so inconsistant , one episode can have 100000 things happen then the next could be filler and it really was annoying , but they could have made this pretty emotional a boy wants to kill his killer , this situation could have been emotional and im sure for some people it was but for me it lacked something , im not sure what but it just lacked it , BUT ANYWAYS thats only about half the show , that arcs over in like 5-6 episodesand then we get into some filler then ANOTHER ZOMBIE and hes cooler , more powerful and has one wish and that is to die , i felt more empathy for this villian than the main charcter. after a fight and our main zombie wins spouting some nonsence about how eu dosentlike to kill people and stuff and such ...........she kills him any ways even thouth ayamu fought so she didnt have to and well this was a mess of an episode OH also she spoke witch previously was said she cant or else she is in lots of pain  , the fight was meh , i seen it in an amv and it without context was better with context

sound: the music was ok , besides the openeing and ending i hardly noticed it , and i watched the dub and before you get all " you watched it in english your opnion is invalid " 1 shut up weeb 2 i had the jappanese subs on and the english dialog is much better , this show clearly dosent take itself seriously so why was the jappanese so formal ? im asumeing this has more to do with dialect than anything but still the dubs dialog was better , cant judge the acting though ,, although the dub felt pretty weak considering it was done by funimation

Characters: BOREING , cared for none of them excecpt for the villian " zombie" who basicly made to look like a villian even though his request was not unreasonable , and this one random girl who was allways in the background but i thought she was kinda cute and wanted her to join the main cast AND i sadly got my wish , SHE became a part of the harem at the very end sequence , even thought it was hinted at earlier , also all the main girls are stupid , all of them forget that ayamu is imortal and he keeps reminding them and himself it seems BUT NOPE they constanly worry about him even though he cant die , and then when hes ok they will beat the shit out of him for being a "perv" sound fammiliar ? it should its basicly half the anime ever made

in conclusion this anime had no pride or passion put into it , it was not funny or emotional even though it could have been both , it did give us the first male magical girl at least , it could have been .........better , not good but better , if the emotion was there (this could have been the dubs fault) but with this anime i feel like it wasnt the facial expressions never really went "emotional" nor do i think i would care because of how por the characters are , most of the funny moments witch are few are the only enjoyment i got out of it and it was because of the dub , reading just isnt funny

This is easily the least consistant series this season, and probably the least consistant series from the last few seasons as a whole. It's very common in this series to go from a hilarious episode to a very serious episode with a decent story to an episode... that was just terrible. Overall, this series is a mixture of comedy, several generally distinct genres raised to an absurb level (vampire ninjas? really?!), a bit of plot, and a lot of ecchi scenes and shots. The comedy mainly comes from the parody in the form of over the top, genre benders.

The story of this series seems to be largly thrown together and halfassed at points, but fairly well put together at others, making it difficult to see what they actually deserve and what they just lucked into at points whilst bumbling about through an otherwise stupid story. Often, especially near the beginning of the series, they just randomly mention things or bring them out of nowhere, to never be touched again. Also, the main plot for the first portion of the series seems to have been finished up and done, and they just randomly put a new story into the series.

Possibly the strongest point of the series, with somewhat cliched character designes but, overall, smooth animation and designs that fit their characters quite well.

I can't really say that there was any stand out sound work done in this series, the OP/ED were decent and the VAs were all decent, but not really amazing.

Once again, a lot of them were somewhat cliched, although with a few things that make them at the very least rememerable.

If you were a fan of stupid humor, over-the-top parody or ecchi series, then this series would probably be worth looking into. Other than that, the series really lacked enough consistancy to be worth watching.

Yet another ecchi anime added to my list but I have to admin Kore wa Zombie desu ka? is probably the only ecchi so far that I actually enjoyed quite a bit compared to some of the other ecchi animes I have seen this actually made me laugh and had a slightly better story (I said slightly). So anyway the story was very enjoyable and like I mentioned the comedy bits actually made me laugh. Even though there was common ecchi moments, I actually thought this was one of the best ecchi/fantasy animes I have seen.

The animation was just about perfect, the style of art is perfect for the anime! The character designs are really detailed and the opening animation was amazing. (That is all on this section). The music was very addictive, the opening caught my eye just about instantly and I found by the end of the series that this is probably the first time I haven't skipped through the opening (not including re-watches). The ending was cute and sweet, the insert songs were perfect for the scenes it was played in. 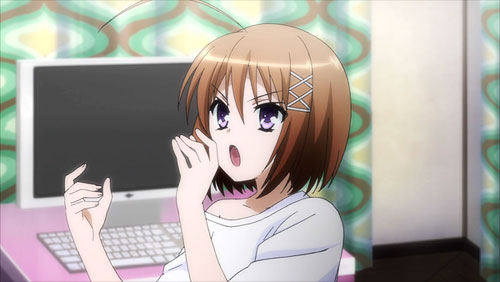 So again another short review nearly done, to finish up I loved just about all of it, I found that it was cleverly put together and the end of the arc was pretty much summed up except a few unanswered questions. I am looking forward to series 2...so for now I will leave you with this-

Perhaps an 8 is a bit high for this show, but it surprised me. I was really expecting something stupid and ridiculous. It sure as hec didn't sound like it would be too good but I had nothing better to watch.

Don't get me wrong, it is a bit ridiculous and very perverted, but not in the tasteless way that some things are. Some of it is even funny. There is quite a bit of action and a bit of drama thrown in too.

The story is about a guy in highschool who was killed and brought back by a necromancer as a zombie. At first, his main purpose is to find the serial killer who killed him, but he ends up meeting some even stranger friends and fighting to keep them happy. The purpose to settle the score with the killer is still in the background, but it's not really the main issue. He lives with the necromancer, a vampire ninja, and a magic garment girl. He also ends up becoming a garment girl which means hello guy in a dress.

I have to say, I was a bit surprised how they chose to do the zombie thing and I think it was well done. He isn't mindless or moaning, in fact, he looks like a normal human, unless he gets too much sunlight. He doesn't do well in sunlight (and yet the vampires in the story have absolutely no issue with sunlight). If he is in the sun for too long, he starts to get dried up. He tries to live a normal teenage life, going to school, hanging out with friends, etc. On the upside, he can't die.

The characters are decently developed and the relationships between them do progress. Each character is unique and although they can be somewhat predictable, they are interesting to watch. I also wouldn't consider them the common set of steryotypical characters you often run in to, although I suppose that would depend on what you normally watch.

Even if this anime doesn't sound like something you would normally go for, I suggest giving it a try. You might be pleasently surprised like I was.