Is the Order a Rabbit? - Reviews 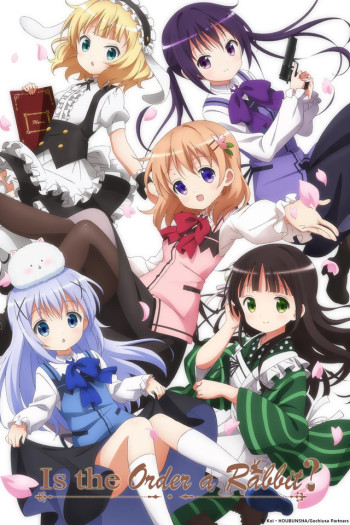 Right...Is the order a rabbit......Even from the title you can say that this anime will absolutely have some very serious issues.

I mean as creative titles go,this is lacking..You could slap "Hitler is my waifu" and be done with it.

But the title was the least of my worries even before i hit the play button.This seemed like the usual,overplayed song called "moe girls do moe things"..And if this is your first time reading any review of mine,i'll let you know that i hate moe with a passion.Cause it lets the writers go all lazy,add some moe spice and the moe-sheep will rip their bra's with excitement.But i want meaning,i want substance,i want when i watch something to be a coctail of marvelous with a splash of boner powder.

This has none of it in spades.Ok let me run this past you for a sec..The anime starts with a girl named Cocoa Hoto(hot cocoa)who moves to a new town,and ends up living in a coffee house called "Rabbit's House Cafe",owned by the father of Chino Kafuu(capuchino)who also has a fluffy white creature as a mascot on her head.

As far as similarities go this is it.All else is different.Not worlds apart different but you get the idea.

And here start the problems for me.This anime start to finish is a borefest.It has the classic episodic nature other animes of this type do,so as far as story goes you won't get anything apart from the cute things they do to pass their time in work or school.

The characters except for Lize,who is a total gun nut,are the same old same old deal..But laziness this anime is awash as Cocoa and Sharo are one and the same from a design's perspective.Ok you're lazy we get it but at least do a decent attempt for fuck's sake.....Oh i almost forgot that other airhead of the party Chiya,who is Cocoa's kindred spirit.Both dumb as fuck and as interesting as a lesson on how to cut your wrists wide open.

VA's and songs were ok-ish i think..I mean i didn't pay too much attention anyway so ok is the verdict.

But as is with every case this anime isn't for me.Maybe if you are a girl you might find it cute and relaxing and up your street.But for me this was boring as hell.

I keep banging on about how i want the anime to feel special,to grab me by the balls and make me pay attention..This sadly doesn't feel special at all.There's a huge influx of animes of this type to the point where i have to wonder when will this ride stop so i can get out and commit suicide in a dark corner forgotten by the world.

I don't expect even for a sec at this point anything innovative from the anime industry..There is a halt in creativity from a point on..Look at Hollywood where everything is either reboots,remakes,superhero movies and stuff.Nothing new.So i don't expect parthenogenesis but at least make something slightly interesting for the viewer and not the same rehashed shit we've seen hundreds of thousands of times.

I'm on episode 7 out of 10 so yes it is improper for me to give a review of this anime... but I just don't know if I can do it anymore. Each episode is filler, the story is non existant, the characters are bland and forgettable except for the rabbit that sits on top of one characters head. Honestly the only reason I'm hanging around is because I'm curious on how her dad got turned into said rabbit on her head, but I don't think the story is going to tell me.

I want to like this anime, the animation is adorable, the sound is decent, but it's just so slow and boring. It's set in a cafe where there is never a customer. Everything is just... bleh. It's not bad if you just want to sit down watch something adorable for half an hour then go watch something else and come back a month later and watch another episode.......

Honestly, I can see some people really loving this adorable anime, but it's just not for people who are looking for a story and rememerable characters or are looking for a cafe anime. Because unfortunately it lacks all of that.

I think perhaps you should take the time to find another more fulfilling anime to make you smile.