Is the Order a Rabbit?? Season 2 - Reviews 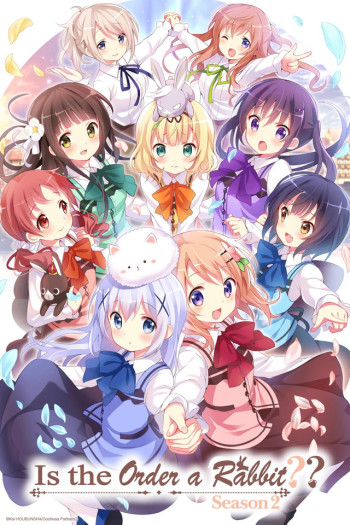 Gochuumon wa Usagi Desu ka is basically everything right with the world. If you want some heartmelting adorable anime, this should be the obvious choice. I watched first season one year ago and I almost got diabetes. Well, recently I watched Kiniro Mosaic and it made me think that I perhaps got used to cuteness over the course of the year, so maybe second season of Gochuumon wouldn't work that well on me. But no. This anime is just total moefest, it grabs you by your heart and won't let go.

Animation is really well done. Art in this anime is absolutely STUNNING. It's incredibly good looking anime. How about story? Well, no story for you, it's just adorable slice of life. But there was one thing all episodes had in common. The fact that I watched all of them grinning like an idiot.

Characters are all great with wide range of personalities. There is not even one single bad character. And it's pretty hard to pick a favorite, but I think I liked Sharo and Chino the most. Voice acting is brilliant and makes for a good comedy scenes, if you listen carefully.

And since I am sucker for good openings or endings, I gotta say - the opening is nothing too special, but the ending... Oh, the ending. ED of this anime has to be one of the cutest I've seen in MONTHS. Very catchy song and adorable animation.

So, I guess you know my opinion about this one. I absolutely recommend this to anybody looking for some heartwarming diabetes inducing anime with no plot. Very relaxing experience!

Gochuumon is my favorite slice of life series with "cute girls" of all time and I consider this second season to be the best of the three. Here everything feels just right: the humor, the pacing, the cozy atmosphere, the way characters interact with each other, the beautiful setting/town this takes place in, etc etc. I can't think of one thing I would want to be done differently here. Except maybe having the whole thing last for 24 episodes instead. Also that ED is perfect. Just perfect. This is an exemplary iyashikei series where the serene, lazy pacing actually works to it's advantage. It would feel wrong if major developments suddenly started happening in a show like this. To me this is the ultimate "feel good" show to unwind to. A perfect 10/10.

The one thing I learned when viewing Is the Order a Rabbit? Season Two is that the whole series is driven by the three S's: SILLY, SEXY, and SELF.

For Is the Order a Rabbit, SILLY is simplicity itself.  The comedic banter between the five girls (seven, as we must throw in the two major additions, Maya and Megumi, Chino's classmates and BFF's) is the best examples of animated speech degenerating into misunderstanding resolved by girls having a better view of their friends and maybe themselves.  One key situation was a series of girls stalking girls being stalked by girls.  The chain of the concerned and curious ever expanded to include the entire cast.  The campout featuring 'zombie pranks' was pure fun, even though Chino wasn't impressed.  Based on four-pane manga, the plot rarely thickens, but season two did feature double-episode presentations.  One featured Mocha Hoto, Cocoa's older sister and impetus to Cocoa's obsession with being Chino's big sister (Chino and everyone else who could use a senpai with a motherly touch).

SEXY is harder for Is the Order a Rabbit.  In fact, the fanservice was downplayed in the second go-around.  It centered on the aspects of 'skirtplay' and 'chestnotice' as the kawaii style was always in evidence.  The worst aspect in this was a tendency for Chiya to break out of her kimono into something more alluring.  Alluring, but not extravagantly so.

SELF led to the more boring moments of the season, but these were the crucial elements as we watch the girls strive toward becoming 'cute adults.'  The visit of Mocha explained much about Cocoa's extroversion toward Chino.  Introverted Chino becomes less frigid thanks to her friends, rough-edged Maya and graceful Megumi; in the last episode, the pair reveal why they were attracted to Chino.  Military-minded Rize begins to soften as she learns the feminine side of life.  Syaro learns to accept her impoverished status and her basic insecurities melt away.  Chiya still remains the perfect 'Japanese maiden,' but recognizes that perfect still needs improvement.

Basically, SELF-ACCEPTANCE is the big theme for season two, which, if you haven't figured this out, the final closing theme in episode last will help this notion dawn on you.

The animation reminds one on Non Non Biyori, except a picturesque European town takes the place of all the rural vistas in that other series.  The coloration is a soft pastel (one character, Blue Mountain Aoyama, seems to blend in almost invisibly).  The music is warm and sweeping, incorporating all the voices of the seiyuu as they intermix their voices in that almost identical comic wit.

If kawaii isn't your thing, the second season offers a better explanation behind the sweetness these girls convey.  It's the iyashikei touch.  And such character studies can be worth the viewing time.

After an apparently successful 2014 season one, White Fox kept the ball rolling with “Is the Order a Rabbit?? Season 2” seeing the light of day a year later. No doubt this rabbit-themed slice of lyashikei has its fans and season 2 will not disappoint if you were happy with the format. So, expect more of the same. The story still focusses on our team of teenage baristas working in various rabbit-orientated cafes dotted around this small timber-framed Japanese town. The only adults in the story (discounting Tippy the rabbit) remain Chino’s father Takahiro Kafu and the local author Midori Aoyama. The only story aspect resembling plot-development is the introduction of Cocoa’s older sister Mocha, who turns up for a visit. Cocoa is keen to prove that she is the big sister now and can act responsibly. If you know her character then you know that will be hard. Other than this is it is all just more cute, cute, cute. They are teenage girls. They are pretty. They are mostly a bit ditzy. It’s an explosion in a kawaii-factory complete with maid uniforms. The seven core cuties will finally get the chance to go on a summer road-trip in season two with a trip up into the mountains to do some camping. Other than this nothing really memorable happens. It is the anime equivalent of a very comfy sofa. You settle in, it is undemanding, if you stop watching the sub-titles for five minutes it doesn’t matter – you haven’t missed anything essential. Despite key visual differences the girls’ characters remain too similar and indistinct. It all goes nowhere and barely scratches the surface of a potential coming-of-age drama. One long whale song with pretty bows on.

About as standard a cute girl doing cute things show can be. If this is your genre, then this show is for you and if you are not then it isn't. I would go into more of what I think this show fails to achieve but at the end of the day this is a show made for relaxing and on that front the show succeeds (I did make it through all 24 episodes) its just that when there is nothing else being brought to the table, the comfy feeling can feel suffocating.