Is It Wrong to Try to Pick Up Girls in a Dungeon? OVA - Reviews 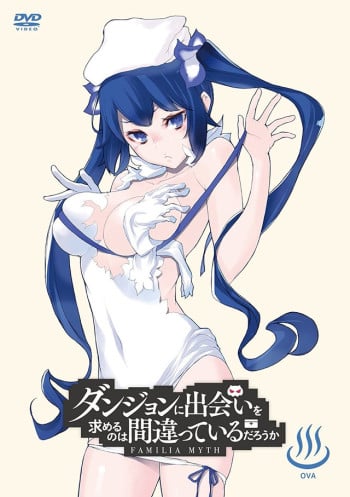 Because there wasn’t enough wasted time and gratuitous T&A in the series itself, now we get a resort episode! No not the resort episode within the original thirteen episodes, another one, yeah it’s not a joke.

After defeating the giant on level eighteen, the group heads back to the surface. On the way back Hestia kicks a rock in frustration, to Lilli’s flirting with Bell, and uncovers a secret area, which of course is a hot spring, because every anime needs a hot spring episode to give the animators an excuse to draw everyone in bikinis.

The next twenty minutes or so is dedicated to the girls talking about the boys, the boys perving over the girls and a useless battle which is added so that they could then draw the characters with ripped closing.

The worst part is the constant jumping to Ais back home in a bath, for no reason other than to show a naked outline of her.

While the animation is on par with the series, the fact it all devolved into a useless “Ecchi” episode takes away from any creativity or “art” there was.

The music was similar to the series, but being that this was only available in Japan, there was no English dub. The Japanese voice work, which I assume was the same as the series, was very well done and even those annoying characters from the English Dub were a bit toned down, to the point they were tolerable.

Like the animation, this portion takes a hit because it essentially dumbs all the characters down to nothing more than simple minded perverts.

Danmachi OVA continues were the series left off and we catch our heroes on their way to fight the evils of a hot spring full of fanservice moments. Our intrepid heroes face the dangers of plot convience and the male gaze while the women try to appeal to whomever they like. However some quirky scenes occur in the maintime that make one scratch ones head. With female breast ogling from both sexes as comparisons are drawn between their bodies they are not aware of the dangers to unfold during their adventure. Wardrobe failures lay in the horizon and skinship obviously cannot be avoided regardless how hard one tries.

The animation of this legendary piece of completely and totally canon material is obviously not skimmed on as one needs to sell the moments as much as they can. From awkward rituals to bouncing chests every moment a jiggle or tremble could be had it is added certainly as much as the budget allowed. Close ups rarely are still shots which adds to the possibly suspension of disbelief of the intended audience.

The voice cast of the original series returns which means the series mostly retains it's quality in voice acting and it also uses the originals opening theme. The ending theme is new and visually certainly more orientated to the general intended audience of this very ova. It appreciates the female form again showing off it's female cast as you'd expect.

The OVA ends progressing the series very little in it's airing time as would be expected from something of this nature. While this OVA almost went into territory that would have brought conflict in future adaptations in the end this is simply swept away and the resolution is light hearted and joyous but makes sure we know that in the future events will unfold and things will never be the same. However for now the characters are at peace and relationships remain the same as at the start of the OVA.

In all seriousness it's a fanservice OVA. You watch this for cute girls in swimsuits jiggling around.