Is It Wrong to Try to Pick Up Girls in a Dungeon? III - Reviews 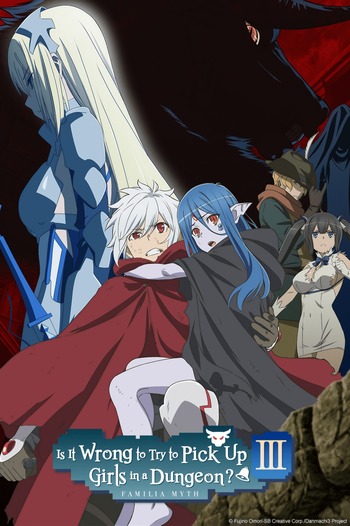 Yet another season of LN adaptation by really long name most weebs can’t pronounce. Therefore, the series is more known under shortcut Danmachi. It’s even pain to translate, because it sounds weird taken by literal meaning, but I digress. This season has the most interesting themes in the series so far, because it takes an important question what if monsters, we have been indiscriminately killing during those adventures in the dungeon so far were sentient or have potential to be. It’s a step up from building reputation as adventurer, building clan of friends and harem of girls. It’s important to point out the world of Danmachi is not an isekai. It’s game-like fantasy world, where for some reason’s gods live with people and govern things behind the scenes by scheming and using their clan of adventures blessed by ability to level up. Unlike in series, where there are levels like hundred or even thousand, in this series level is much harder to get. You are already way more powerful than lower levels, when you achieve level 5. It’s nice change of pace. What is not really change of pace is the fact, that the series is still just a fighting shounen in fantasy settings with harem. As I said this season picks up theme of sentient monsters, which pose two-fold problem. It makes monster inherently stronger, because they are no longer simple brutes, but importantly poses morale issue, which even threatens established social order controlled by gods. Siding with monsters can also make you instantly social outcast and enemy of the people.
There are two connected arcs in this season. One is about one-dimensional evil monster hunters, that hunt sentient monsters for fun of torture. Another arc is about rescuing the group of sentient monsters [1]. Everything with gods, usual suspects, scheming behind the scenes trying to get their desired outcome.
But still one can’t help to not perceive everything is mainly happening in order to save another waifu, monster girl, Wiene.

oh boy here’s danmachi for its bounce back from the really lackluster ending season 2 and wait... does that say mature themes? hmmm well peoples ignore that unless the spiciest thing you watch is Snafu, uzaki, or any other rom com type sol then sure this might be mature. but all joking aside man I was really hoping the story to be better after 2 season of minimal character growth it’s clear that the story is what had to pull viewers back. Well, I’m here to say it depends, if you really love the show then I’m sure I don’t need to convince you to watch this. But for those who are on the fence you need to give it 3 episodes, and if you're tired of bell, you just aren’t feeling it, or maybe you can’t stand the abuse of cliche's in this show then you need to drop it cause it will not get better. otherwise, the show does make some positive strides in certain directions while tripping over itself in others. that’s the hip fire version now let’s focus in on the other stuff and don’t worry it’ll be spoiler free until the very end (with warnings).

first the animation looked better this season which kind of surprised me, not much better, but it certainly looked more fluid and eye popping most of the time. but the big thing was no CGI *wow* I know right, I honestly would have given a lower score since shows recently have really blown animation out of the water but unlike other shows that came around the same time, they seem to have improved so thumbs up from me.

the sound its good armor clanks, birds chirp, people scream, and the caves echo. and on top of that the OP& EP were enjoyable of course the music taste is my opinion but still they were nice.

the characters for a majority of the "side" characters minus the virgin celibate prostitute fox girl all were pretty good she wasn’t bad it’s just that her character felt jipped from the beginning with the whole "redemption" of a girl who is about as pure as the damn virgin Mary. the gods needed more screen time they were relegated to the background that only for very small points looked cool and did great but then feel to the wayside once more. can we get Hestia to act like a god again instead of a big tit loli? but bell is the big problem here he has no growth, at all. the entire show he’s called a fool and to himself he says he needs to make sacrifices but will then say he'll never change his, beliefs, stance, etc. see why it’s frustrating? and throughout the show he utters the same lame trope I have to get stronger but why? strength means nothing becoming strong is simply the hurtle to achieve your goal not the goal itself. but more on that later.

the story again no spoilers, I have to say I was compelled for the most part for the first half but after again the same dumb tropes I started losing interest. bell never makes a hard decision and only makes those decisions to help himself feel better not save the lives of others around him. if I say any more it’ll spoil it so I’ll leave it of at this can we stop the whole t/Jesus pose standing in front of someone to symbolize protecting them? it doesn’t look cool anymore and in one scene of this season it looked downright ridiculous. picture without context come back if you remember this 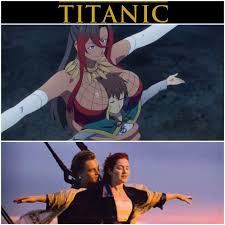 alright so to wrap it up, I really expect more from danmachi it’s a show with a slew of gods from different pantheons mostly Greek ones stand out and bell is called the argonaut and holy shit artemis calls him Orion. my point is for a show that leans so heavily on Greek literature they leave out the best part the tragedy, it’s what gives them meaning and make them much more compelling. the end of this season honestly made me more confused on what is the next plain cause right now it has no direction. regardless of how I feel it was still better than the end of last season but if it does get green lit for season 4, I just hope that it actually picks up a damn story line/adventure that remains compelling. this one was bit long so thanks for those who stuck it out its s sequel, so they are usually shorter, anyways I’m curious to hear what other people think, so thanks for the read, and have a good one!

If you do not know how to make your anime sell, just add a harem.

In a nutshell
After growing bored of their realms, the Gods of multiple pantheons descended to Earth, where they create groups called Famillia. The story takes place in a fictional city called Orario, which also has a tremendous net of catacombs. Many members of Famillias visit this dungeon to defeat monsters to earn money and to just become famous. Among many Famillias, there is the Goddess Hestia's Familia. Unlike other Gods, Hestia has only one follower, who has never had a desire to reach “the top.” However, everything changes when the only follower of Hestia, Bell, meet Ais Wallenstein, a first class adventurer. Is It Wrong to Try to Pick Up Girls in a Dungeon? focuses on Bell’s quest to becoming one of the strongest adventurers.

Story
Despite what appears to be a fairly basic Dungeons setup for the story, Is It Wrong to Try to Pick Up Girls in a Dungeon? does manage to offer some good originality. Or so it was in the two previous seasons. Unfortunately, unlike the first season, the third season lacks originality and does not look like something even remotely similar to it. The story used to focus on Bell Cranel journey to becoming the hero. However, now it is more of a Bell Cranel, collecting waifus for the harem. And the problem is that it does not help you to take the story seriously, because the third season ‘tries’ to touch upon some interesting details, monsters’ evolution and their desire to stop fighting with the adventurers. This idea is not bad at all, yet, it just does not work, when you see Bell and the harem.

Characters
As for the animation and the sound, there is nothing worth mentioning. However, character wise, this is when another problem arises. Unfortunately, supporting characters are getting less and less screen time, however, Bell has plenty of it. Most of the characters are just joining Bell’s waifu army for no reason and while Hestia does not appreciate the fact that she might lose monopoly on Bell, it does not worry her that much. ‘Yes, Bell is the best, let us just join the harem.’ And the problem with Bell is that he no longer struggles, as he used to in the first season, now you know he wins no matter what, one shots no matter who and gets all the waifus.

Overall
All in all, as a fan of the anime, I really miss what it used to be, the first season was great. What it is now is hardly enjoyable, there is no tension, and the result is always the same. Things could have been much better. If I were you, I would watch the first season and stop on it. However, the rest if for you to decide.

It was simply amazing how much this season approached in relation to the characters, especially the whole issue of the beginning of the story, the plot that had besides the development of the protagonist about his goals, a dilemma, even a search for his meaning and even a search to understand what he really seeks, giving new air to the work as a whole, expanding the universe more and more. I LOVED THIS SEASON, I thought it was better than the previous one, and I'm waiting for a sequel. * I apologize if it is bad to understand my words, I am not very good in English and have to resort to a translator to instruct me in the words, I have no intention of using offensive words, if you gave to understand this at some point, I apologize.