Is It Wrong to Try to Pick Up Girls in a Dungeon? II OVA 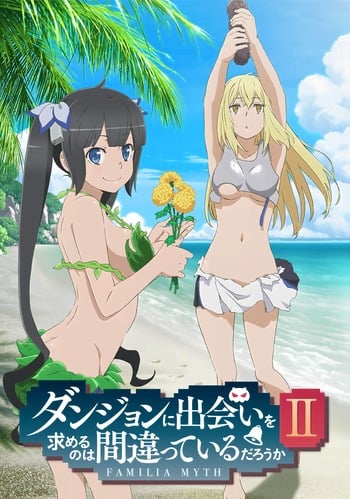 I have no idea what i just watched, my head hurts, I... have no words for this... just why? Why did they make this?

A standalone goofy episode where the girls are trying to impress Bell with a swimsuit fashion show on a tropical island. Of course, a few things go horribly wrong and just like the hot spring episode the cast finds themselves in a strange predicament.

It's always neat to see the goofier side to these characters when it happens in the actual series itself but I really feel that these kinds of standalone episodes really don't work in the show's favor. It just cheapens the feel of the rest of the show. There is plenty of great light novel material that got cut from the seasons that would have been great for these OVA episodes, a missed opportunity if you ask me. A lot of people are invested in the show because of the behind-the-scenes politics.

But I guess there is a huge market for people who just want to see a very shy Haruhime, a really obnoxious Hestia in a really skimpy bathing suit or a Lili trying to show off her curves while rolling around on a ball.