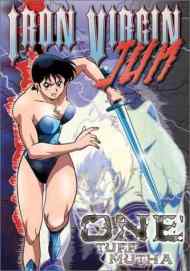 Jun Asuka is a member of an aristocratic family that has a tradition of marrying off its daughters once they reach the age of eighteen. For the athletic and independent Jun, this is a fate worse than death, and thus she escapes the castle with her servant, Kurata Onami. But escape, it seems, is not so easily achieved as her mother has sent a gaggle of goons to not only retrieve her, but to take her virginity as well. Will Jun's purity and kick-ass fighting skills save the day, or will she be screwed -- literally!

Story Hell, they say, hath no fury like a woman scorned. Some time ago I was given a TACO commission by KiraRin, who broke her usual pattern of unprovoked abusive behaviour towards me and asked me to watch and review the excellent Gankutsuou. However, after arbitrarily deciding that I was taking too long about my duties and that she was “sick and tired of your crap, therik”, KiraRin – cruel mistress extraordinaire – made an about face and thrust at me a new obligation: to review the pungently pointless Iron Virgin Jun. In truth, I wonder if my labours might be wasted; the synopsis that we have on the site tells you almost everything you might need to know about this unabashedly niche OVA. There is a story only in the sense there is a beginning, a middle and an end. The heroine faces and overcomes an obstacle, and any sub-plotting beyond this would just get in the way of the fighting and the high-larious rape attempts. Yes, rape attempts played for laughs. Rape generally isn't funny, and equipping a band of bumbling villains with animal-themed strap-ons does very little to change that. I was almost able to raise a smile when a helicopter launched a salvo of rapist-laden missiles at the luckless heroine, but the rest of the OVA's attempts at getting a laugh – whether it's a pointlessly ornate duck strap-on or an arrow directed at someone's anus – generally boil down to 'hurr hurr, penis'. There are “laughs” to be had at the expense a couple of crudely retarded characters, but the anime remains an abyss of sophistication. Unsophisticated is also a watch word for the script. It can't be easy to fit a narrative and backstory into 40 minutes, but plot exposition provided through shouted soliloquies represents one of the more grating ways to do this. Whether barking at length about why her daughter must be violated by ugly strangers prior to marriage or cursing her progeny for escaping a certain trap, Jun's mother strives, it seems, to insult the viewer's intelligence at every ridiculous turn. Others offer little more credibility or nuance, and a scene where Jun is told about a magical island on the horizon is remarkable only for its sheer irrelevance to anything else. As for the plot holes, such as the questionable wisdom behind having an easily-destroyed malevolent spirit in the house and actually taking the trouble to smash it with a hammer until people's lives are on the line, picking them apart doesn't even constitute sport. Animation I've not seen enough anime from the early 90s to effectively gauge the relative quality of Iron Virgin Jun's animation. Suffice to say that most of its ugliness is largely intentional. Frighteningly butch females, trinagularly-torsoed henchmen, underwear-sporting rapists in various flavours of repugnant – the character design takes eye bleeding to a whole new level and supplements and the dour textbook looks of other individuals do nothing to rectify matters. Some scenes also sport a frankly bizarre dim-glow look, as if the events are taking place below some streetlights and being viewed from behind a steamed-up window. Shortcuts abound, as you might expect, but for every acceptable device, such as characters fading away when running into the background, there comes a more jarring workaround such as when it appeared to be raining colour gradients. If anything is worthy of credit, it would be the fight scenes, which encompass enough motion and style to stand out. If only as much work was put into making them less pointless. Sound Amidst a generally unremarkable voice cast, Kazue Komiya hams it up as Jun's mother sufficiently well to make the anime enjoyable for people looking for a laugh, as well for as any odd specimens who might be inclined to take it seriously. The sound effects complement the atmosphere in most cases, adding some welcome punch to combat scenes. However, on other occasions they are simply too loud and distracting. There are very few background tracks, which means the the music generally straddles the fence between utter silence and camp 90s tunes, and I would have difficulty in nominating which side of this fence I would have preferred it to fall on. Mercifully, it is largely unobtrusive – I had to rewatch bits of the OVA even to write this paragraph – so your ears should be safe on this front at least. Characters When the most striking thing about the characters is how damn weird they look, it becomes difficult to speak about anything else. Personalities are largely absent, owing to the 40-minute format, which favours action over development. Jun's hulking mother at least has some direction with her desire to see her daughter molested, but the complete lack of credible motivation sets her up as an unredeemable pantomime villain. Overall I can only question whether there is any audience to whom this show appeals. The unappetising designs crush any scope for arousal underfoot, unless one postulates a simultaneous fetish for muscular females and bizarre penis substitutes. Meanwhile, the only real humour on offer is to be had at the expense of the ludicrous premise, but even this is limited. Iron Virgin Jun is a niche anime without a niche to fill. It offers not a shred of pay-off for the offensive ugliness or the brain-melting stupidity and represents – at best – a waste of forty minutes. For Go Nagai, that's pretty good. 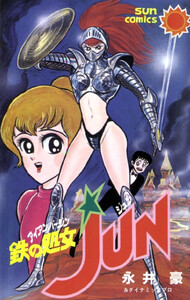