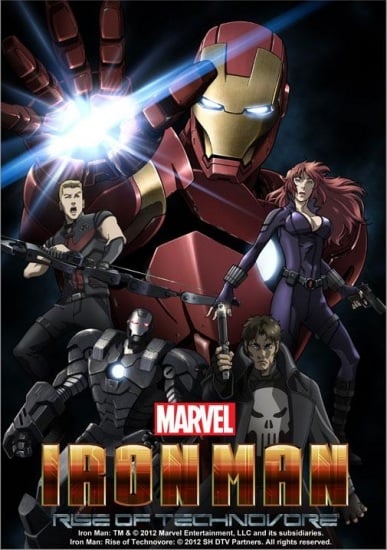 In his Iron Man armor, billionaire Tony Stark prevents an attack from a mysterious new foe. Unfortunately, innocent bystanders are killed, including his best friend War Machine, Lt. Colonel James Rhodes. Detained for questioning by S.H.I.E.L.D., Iron Man escapes, determined to find the mastermind behind the attack.Pursued by Black Widow and Hawkeye, Iron Man enlists the help of ruthless vigilante The Punisher. But can the Armored Avenger handle what he finds when he catches the person responsible and is forced to face his deadliest weapon, a biotechnology called Technovore that could wipe out all life on the planet?

Yes, it’s MARVEL anime time again and believe that the stakes (or the anticipation of it) are somewhat high or low considering as I said before, no one has that much positivity for the Marvel/Madhouse anime, and yet I’m one of those people (at least the one who reviewed two of them so far) and now here comes another one of these collaborations and if you think it’s going to be their last one, I wouldn’t kid around that since I heard there might be more of these coming. Let’s hope this one is a step-up, if not, they need to go back to the drawing board. In his Iron Man armor, billionaire Tony Stark prevents an attack from a mysterious new foe. Unfortunately, innocent bystanders are killed, including his best friend War Machine, Lt. Colonel James Rhodes. Detained for questioning by S.H.I.E.L.D., Iron Man escapes, determined to find the mastermind behind the attack. Pursued by Black Widow and Hawkeye, Iron Man enlists the help of ruthless vigilante The Punisher. But can the Armored Avenger handle what he finds when he catches the person responsible and is forced to face his deadliest weapon, a biotechnology called Technovore that could wipe out all life on the planet? I would say that it was a bit of a step up from the TV series but they would be 1/50 true as I watched the whole thing, some parts of it felt like it was trying to be philosophical and deep but it ends up being a riddled mess but not with bland or boring expectations, just the really dumb ones that doesn’t answer any questions. I get most fans would upset with this due to their connection or attachment to the comic book but for me, I’m neither attached to those but as an anime film on its own merits, it’s slightly less infuriating but nevertheless amnesiac. For instance, Tony Stark didn’t know the one after him was Ezekiel Stane, the son of Obadiah Stane, his former boss whom he had to kill during the first live-action film and it never occurred to Tony that his son might want revenge but then they said that the son died in a plane crash when he was 16. Yeah, that left me with confusion. Aside from Iron Man returning (which is obvious, no shit there), also appearing is Nick Fury, Iron Patriot (Rhodey), Black Widow, Hawkeye, Maria Hill, Pepper Potts and of course, The Punisher, who was hyped up during the film’s promo if he played a big part of this but he’s only there for 10 minutes, possibly they’re going to make an anime spinoff of that, who knows? It was all a big dick tease. Animation for this is fairly so-so from Madhouse, as the colors are very dark-toned and muted; even if some parts that almost seem black and white. Some character designs are often off but not much to put me off of it. The action scenes are pretty standard to weak and forgettable, albeit the weakest ones being the chase from Pepper’s vacation home and that chase with the Punisher. Music is also standard here but I never came across with that as it feels like there isn’t any at all.   Now, I did watch this in the English dub as always but since that episode of Remote Viewing where Cyrus and Brian Salisbury recommended, it is a good thing that I did because I was watching the English dub with subtitles and the subs was just clumsy, making the Japanese version effortless and all for naught. I will say that I prefer Matthew Mercer as Iron Man rather than Adrian Pasdar as I thought he was more convincing in there, even if the charm and charisma of Tony Stark is gone in there. Now here’s the part that doesn’t settle with me, and that is giving Norman Reedus as the Punisher top billing, even though it was only there for 10 minutes. I know the reason why they did it because he’s a well-known name since The Walking Dead but that’s just going to rub fans the wrong way; tricking them to thinking The Punisher is having a big role in there.   FINAL VERDICT: Yeah, this was also underwhelming and just sloppy in execution. You know, if Marvel is keeping going to make these collaborations with Madhouse, they should at least focus on the writing more and avoid the basic anime tropes that put on there. I don’t hate it as much (it’s still bland) but I felt like I wasted my time with this and that I’m not going to watch it again. 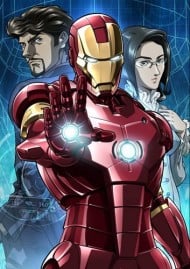