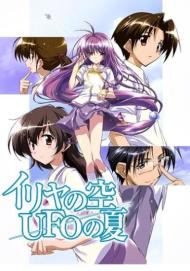 When Asaba sneaks into the school at night for a quick swim, he doesn’t expect to see a strange, vacant-minded girl with orbs stuck in her wrists right there with him. Stranger yet is when the police come to take her away... but to his surprise, he sees her the next day at school, a new part of his class! His interest in the girl piques the jealous curiosity of his friend Akiho, but between air raids, military operations and a possible alien invasion on the horizon a love triangle is the least of Asaba’s worries. Will Asaba come to terms that the fate of the world and the fate of the girl he loves are two very different things?

Story: 7/10 Irya no Sora, Ufo no Natsu is a story about two middle school (Year 2, Class 4) teens that fall in love. Kana Iriya is the female lead, but she is constantly absent fro the story line. There is a lot happening behind the scenes that no one else (inculding Naoyuki Asaba - the male lead) is aware of. A war between aliens and humans is being fought, people's memories are being erased due to issues of national security, and in-fighting between human factions are the major issues, but they are never really addressed becase the story is trying to make you focus on the two lovers. Naoyuki is a little dense (like a lot of male leads in most anime) and doesn't even seem to notice that his classmate and childhood friend, Akiho Sudou , is in love with him. Akiho's anger towards Iriya is really obvious, but without any real interaction between the two until late in the 6-episode series where they "fight" each other in an eating contest, there just isn't any "oomph" from her whatsoever. She attempts to steal Naoyuki's attentions during the festival, but Iriya isn't even there, so it isn't really a competition. Naoyuki attends to his responsibilities during the festival and then runs off to "meet up" with Kana when he receives a call from the mysterious Enomoto. The story really sticks to showing the interactions between Kana and Naoyuki or the immediate events surrounding those interactions. The only time we see any other characters is primarily for comedic relief (imparticularly, the president of their newspaper club, Kunihiro Suizenji, or the school nurse, Mayumi Shiina). I gave the story a 7 because the way it was constructed was so chaotic that it made it difficult to really connect with the characters. Animation: 6/10 The animation was a little old-school in comparison with the year it was made. The characters are fairly standard and even when they are moving a great deal they are very simple in design. Unfortunately, they also use a lot of stills in this anime. I gave the animation an 6 because of how little effort they put into making the characters and defining movement as well as with how little detail went into the backgrounds. Sound: 9/10 I liked the voice acting for the most part, but I thought that the music was a little over the top on some of the more intimate moments in the show. I felt like they were really trying to move the audience with the music rather than with the characters emotions or storyline. I gave the sound a 9 because it seemed like they over-reached during the special moments. Characters: 6/10 None of the characters have any real back-story, aside from Kana Iriya, and her back-story isn't very helpful in defining her as a person. She remains mysterious until the end. Again, the way that the story unfolds both in the storyline and in the visuals, there isn't any way for the audience to understand what is happening until the last epsode, where Naoyuki is reading a convenient letter from the school nurse "Mayumi Shiina" (which, apparently, isn't her real name). Even though we follow Naoyuki closely throughout the series, when he supposedly lashes out at Kana due to his inability to protect her (after she is attacked by a wandering homeless guy that happens to overhear a conversation about Kana living at the school illegally), it comes off as a really wierd "I hate you because you're too much trouble" scene. I gave the characters a 6 because they weren't defined, they were confusing, they were hollow shells with big personalities, or they were just plain absent in the show until they were needed for a part. ("Hey, I have an idea- let's toss some random homeless guy into the mix to create trauma and make a huge deal out of it even though we won't let anything happen.") Overall: 7(+1)/10 I gave this show a 7 overall because it could have been really entertaining if we knew just a little bit of what was going on behind the scenes or if they had followed both Naoyuki and Kana alike. I think that they should have made it a 12 episode series and alternated between Naoyuki's and Kana's individual experiences and recollection of events. I'm sure they were trying to do something different here, but I just don't think it worked very well. However, I bumped up the overall score (+1) because we got to see Kana Iriya lose her clothes more than once and we got to see he bare breasts. Yay for boobs! 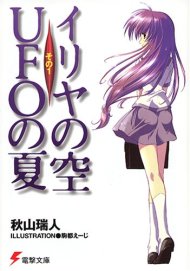 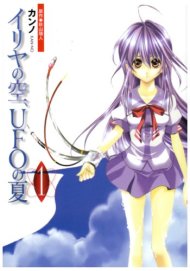