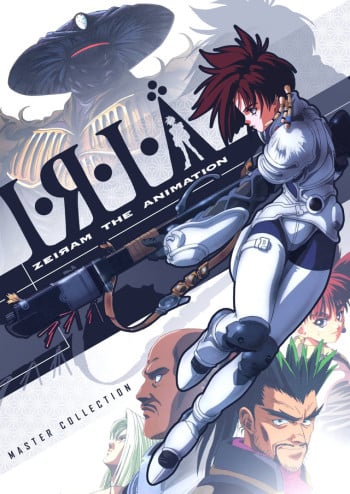 In a future world dominated by corporations, Iria is one of the best in the bounty-hunting business. Her latest challenge is the lifeform codenamed Zeiram, an invincible killing machine built to be the ultimate weapon -- but this time, cash is not the only motivation. Iria must uncover the secret behind Zeiram and stop it at all costs in this action-packed OVA series.

StoryBack in the late '90's, I approached anime purchases as an exciting gamble. Armed only with a fistfull of cash earned from long hours as a soccer referee and unbounded enthusiasm, I would go to the video store and buy something, based only on attractiveness of its box art. In this magical time filled with VHS tapes and blissful ignorance, Iria: Zeiram the Animation by chance, drawn in by is short length and comely heroine. While not a masterpiece of storytelling, animation, or sound, it does everything a good OVA should do: transports you to another world, gets your heart racing, and comes to a satisfying conclusion. Iria: Zeiram the Animation traces an arc that roughly maps onto the Alien trilogy (there was a fourth movie, I'm aware. It doesn't really count). It starts with a tense, suspenseful first encounter between Iria, her brother Grenn, their friend Bob and the invincible monster, Zeiram, on a marooned ship in a remote part of the galaxy and ends in a final showdown between the young bounty hunter and the creature in the heart of one of the most densely populated civilized planets. Unlike Ripley, however, Iria and her brother possess a diverse arsenal of bounty hunting weapons which they unleash on the monster. The various shields, guns, swords, and traps add some much-needed excitement to the hunters' encounters with an invulnerable foe. In addition, the plot keeps Zeiram on hand as often as possible during each installment to help preserve an atmosphere of danger which is so vital to a successful monster flick. However, the OVA oversteps its bounds a little when it messes with chronology and pauses for a few introspective moments in the middle--the sudden temporal jumps and pauses for reflection ruin the atmosphere a touch and spin several threads that never find resolution. That said, when the action comes back, the scope of events elevates, turning the tempo from intimate cat-and-mouse to that of a full-blown war by he show's end. In addition, the predictable story comes to a reasonable conclusion--which should be considered icing on the cake when compared to the less final wrap-up of a title like Ruin Explorers or Dragoon.AnimationThough the show itself doesn't quite match up to its promotional materials, Iria: Zeiram the Animation looks pretty darn good, even twenty years later. Of the many attractive visual elements in the OVA (not the least of which is the catsuited and slinky Iria herself), the technology and environments stand out the most. The city of Taowajan weaves rustic charm into its big-city feel with its distinctive umbrella-shaped buildings and Chinese fashions; the sense of place that accompanies these design choices pay off in spades when everything goes up in flames during later episodes. In addition, the rich color palette prevents the visuals from appearing washed out, even if they can be on the dark side from time to time. However, it's in motion that the OVA shows its virtues. The show's many action sequences unfold with admirable fluidity and very few reused frames. Good "camera work" and the panoply of weapons draw the viewer into each set-piece despite the fact that they all focus on some showdown between Iria and the monster.SoundMy affection for the English dub track dates back to when watching any anime was a novelty and it has no small hand in the nostalgia I associate with the show. However, the dub does do a number of things better than the original Japanese language track. Stacie Lynn Renna's Iria has a steely timbre to her voice that rings truer to the character than the slightly more feminine interpretation put forth by the her Japanese seiyuu, Aya Hisakawa. Along similar lines, Terry Muus brings a less bratty reading of Kei to the table, which makes warming to the urchin considerably easier. But the best performance of the OVA goes to Gary Suson, who plays Bob in the dub. His detached delivery and vague hints of emotion match perfectly to the senior bounty hunter's role as mentor and voice of reason. The OP theme has a similar feel to the '60's classic Barbarella: Queen of the Galaxy, appropriately accompanied by a mashup of pinups and action shots. Its wandering melody and mournful lyrics will likely prevent it from finding its way onto many playlists, but it sets the tone perfectly for the otherworldly aventures contained in the OVA. In contrast, the power ballad that each episode closes with is completely forgettable, along with the well-suited but unoriginal music scattered throughout each installment.CharactersLike a good number of women in '90's anime, Iria doesn't need a -dere to define her personality. Though she starts out shrill and petulant, her combination of real skill paired with a growing sense of responsibility transforms her into a sober young woman by the end of the OVA. For a short spin-off from a live-action movie, the varied interpersonal situations and even development comes as a nice surprise. Iria's supporting cast doesn't offer as much meat, however. Whether it be the lovable rogue Fujikuro or the spunky kids Kei and Komimasa, nearly every other character serves merely to offer contrast to the engaging lead. But tiny quirks in each of the lesser players keep them from becoming completely flat. Fujikuro proves to have some hidden mettle, Doctor Touka shows that he's got more than brains alone on his side, and Kei graduates quickly from annoyance to sidekick through several demonstrations of competence.OverallFrom where I sit, Iria: Zeiram the Animation is something of a classic. The OVA has an excellent sense of self and thus manages to tell a (mostly) coherent and complete story within its six episode run without leaving too many loose ends unresolved. If you find yourself in the mood for an attractive, action-packed sci-fi adventure from yesteryear, you could do a lot worse than this show.

My only complaint about this show, is that there needs to be more of it. A whole series, would have been great. Hell I would of even settled for a Manga.This had such a vibrant world and it just feels like everything about it was cut short. It does end a arc. But What happens after. What other adventures are out there for Iria and Kei. To be perfectly honest this series had the potential of being a Sci-fi Slayers. But it just sadly ended half formed. I feel as though this is the start of a story we will never see. This is what I wrote on a amazon review for the series, I feel as though I should go more in depth here. First off the OVA dragged on, more then it needed. Zeiram didn't need to be this unkillable monster and by the end of the series it turns out that well it's not. I ended the series feel as though there was more to the story. Kei going through the hardships of becoming a bounty hunter. Hyjinks and nonsense. Whole stories that have nothing to do with Zeiram. All left at a dead end, and forgotten. This could have been a great somewhere in the vien of desert punk, slayers or daphne in the brilliant blue.

Iria: Zeiram The Animation is a classic example of an old school anime.  Its one of those animes that just has that old memorable feeling to it, ya know?  Well as the story goes, its really a far fetched bogus one if you ask me.  The most powerful demon, known as Zeiram, escapes and its up to bounty-hunter Iria to stop this havoc.  That's as good as it gets in 6 ovas folks.  The monster is invincible and Iria has to find a way to kill it before it destroy Earth.  Its a pretty drawn out story that could of been made into about 2 ovas, its incredibly slow and takes some will-power to finish it up.Well once again, the 90's had that old school feeling that I cant rip on to much.  There is a lot of gun fire and fight scenes that make the ova worth sticking through.  But yet I can't help to say the fight scenes are not amazing, there just average "lacking of something" fights.The sound is decent, there's one particular song I liked and that was the intro.  I have to admit the intro really started to get good about ova 3 and had me listening to it every time.  Iria's voice though was very monotone and there was NO emotion displayed at all.  This anime is just so boring at this point I don't even know what to say about the characters.  They never develop one bit and they lack serious emotion.  There manikins that move basically.  Except Iria has a pretty nice costume that kept my attention.Lets just say if you didn't like episode one, do not continue.  Its boring and really im sure there's a better ova out there.  If you really like it then by all means watch it and try to convince others, but overall it was lacking a lot and did not seem like the full potential of the 90's.