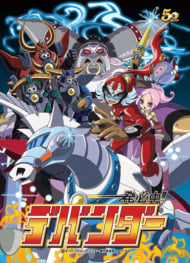 The story revolves around a spirited, carefree boy named Kazuma Harukaze, who lives with his little sister Sakura and his horse Lovely on a farm within sight of Mt. Fuji. One day, a "meteor" lands nearby, and it turns out to be Hinkeeru — a messenger from Muzanda who has come to warn Earth of a grave danger — and a robot horse named Robony.

340 users are tracking this. Log in to see stats.

I have no idea. No idea how to rate this, no idea what I thought of it, no idea what the fuck this was about and that... entire fucking golden ball segment. No. Fucking. Clue. So let me start by explaining the plot, to bring you up to speed: So, cows. Space cows. They're all, or Kingblu, and I shit you not, Kingblu, Leader of the Space Cows, says that he needs... something from Earth, because no other barren hellhole of a world would work. He needs... something. Life? Milk? More cows? Is he a revolutionary king bent on freeing cows from the yolk of tyranny of their human captors? Does Cowtopia need cows? Does he want the life of Earth to restore his body and his super space weapon to full capacity and wreck shit all over the galaxy? Who knows. Maybe the last one since that's as reasonable as it gets and when Space Cow is the most reasonable thing, you know things are fucked up. So we zoom in on Earth, where we meet a pair of kids and their horrifying horse. No jokes, their heads DO NOT match their bodies and don't get me started on the horse. That shit scared the fuck out of me. The character designs for these three... horrific. Add in misplaced lips, ass and by kids I mean minors, a robotic horse and you may think that the animation is complete and utter shit. But remember Space Cow, remember on the poster is a mechanical horse, not a small pony like the ones that the kids have and is creepy beyond all reason, but a super pimped out mechanical horse. And the rider who rides it into the sky provides one of the greatest moments in the series, a moment so completely fucking amazing that I am tempted to give this a perfect 10. To compensate for 3 minutes of awesome is 21 minutes of mindfuckery and symbolism with innuendo rammed deep into it. Now, I'm not going to attempt to explain the logic of a flying mechanical horse and the red tights wearing adolescent who rides it but getting the golden ball out of the mechanical horse was past any reasoning, logic, sensibility and a few laws. It's seriously disturbing and uncomfortable. But, this is really untapped potential. With some tiny mecha... things that like meld together, into some giant ass mecha to fight space cow mecha, breakdancing robots, spinning tops, that fucking kickass mechanical horse and rider shit that was so fucking badass that it did a complete 1080 on this shit, that... golden ball scene and a surprising last-minute bullshit twist that leaves you hanging, all that could have been some kickass lackluster series that would have dropkicked the season in it's udders, but all we got was this. And it kinda deflates at the end but after all the shit that happened, you're treated to a conclusive conclusion that concludes nothing. Nothing made sense, the characters looked strange, the creator of the Devander must be one of the creepiest guys in the galaxy of Space Cows and this is either pure shit or sheer untapped potential that blows minds. I still don't get it.