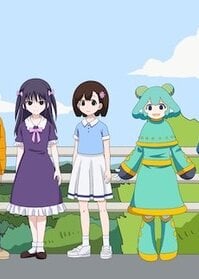 The "Evil Corps," led by Don, are on a mission to conquer the universe. They set out to invade Earth first, but they struggle as some quirky Earthlings stand in their way. Eventually Don's plan to invade Earth becomes distorted...?! This wacky slice-of-life sci-fi comedy stars a team of aliens you just can't hate and lots of unique Earthlings!

Hiro, Miyako, Sae and Yuno are back, and ready to pump up the crowd in preparation for the next season, Hidamari Sketch x 365!

Hana Ichinose has enrolled in high school one year late due to studying to get in. It might not seem like a big deal, but it is to her. She’s off to a slow start, but she wants to work hard and catch up to everyone else!

Commercials for a collaboration between Fei Ren Zai and Pizza Hut for their snack platters.