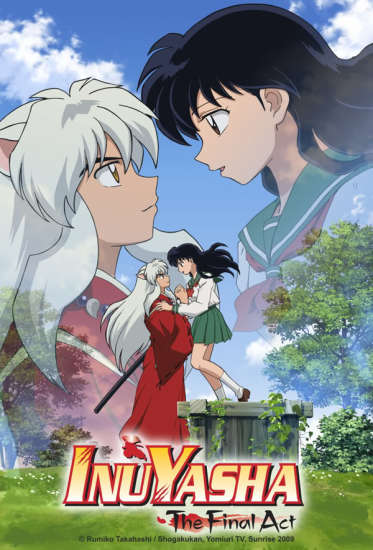 both are girls are from the modern world thrust into the past and take on the role of a priestess . They both have a strong storie and a wounderfull romance to suport it.

Both shows involve awesome sword fighting, special swords, out of this world characters, the past, humor, love, and some darkness. Both Kenshin and Inuyasha have times when they become a darker side of themselves. For Inuyasha, it's when he turns demon. For Kenshin, it's when he becomes or nearly becomes Battosai the manslayer. Both have romance, though moreso in Inuyasha. Both also have plenty of comedy. In moods they are very similar. If you like one, you will probably like the other. The enemies in both shows are supernatural. In Inuyasha, it's demons. In Kenshin, it's other strange things. The action in both is exciting. The sword battles are awesome. If you love one, you will probably love the other.

After watching InuYasha I wanted to watch more anime similar to it. This anime (in my point of view) kind of continues on the anime in another way. Really is a good anime to watch

Although the Plot is way different, the characters are not, as both are created by the same author, "Rumiko Takahashi" and she kind of re-use some of the same character designs and personalities:

Both have the same feel for the interactions with the characters and although Ranma is more comical, you can see it as a stepping stone for what would become InuYasha.

These animes are about the same and even have the same group of characters, although Zenki is episodic, with a monster of the week and InuYasha is far superior with an epic story that moves forward with every chapter. You could say that Zenki is a bad copy of InuYasha, except that this anime happen much earlier in time.

Suzuko and Shu are siblings who live in an undetermined part of Tokyo. While walking together one day, an explosion suddenly occurs, and Suzuko awakens in an unfamiliar place: the past. The time is during Japan's civil war, and the faces are anything but friendly. With the help of newly-met Shukumaru, Suzuko must unravel the mystery of her disappearance and discover the connection between these two worlds, while trying to figure out how she can return to her own time and place.

After mysteriously being sent back in time, Shin-chan saves the life of Matabe Ijiri, a samurai who leads the army of a small province in Japan. Welcomed as a guest by Ijiri, Shinnosuke must figure out why he is stuck in 1574.

Professional wrestler Genzou Shibata was preparing for his next match, when suddenly he was summoned into another world. He's asked to defeat the magical beasts that roam the land, but as an avid animal lover, Genzou would rather help these creatures. So after a short stint as a hunter, the man opens the Kemono Michi pet shop. There, along with his part-animal employees, he hopes to adopt out rare beasts and foster a pet culture in his new home.