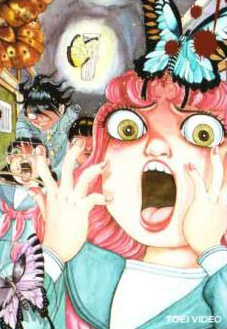 Warning this Review May Contain Spoilers-

Urgh, this is like one of them shows that I hate yet so many people like, it is about some creepy guy who falls in 'love' with all these girl and stuff happens. But didn't like the plot and the animation was just a no-no for me but yeah it was stupid some people enjoy stuff like this but I really didn't.

It follows the story of this guy nicknamed Creepta who falls in love with so many girls just because they were slightly nice to him with supernatural twists and turns and things. It was just bad, just bad...it was all so quickly done with it was crazy and even trying to remember what this was really about was hard >_>

Cringy, honestly...the character designs were all just weird and even though I know that's probably the aim of the anime being cringy and off but still these were just disturbing and will give you nightmares, just by looking >_>

Hehe......no, just no. Even though it wasn't bad necessarily the whole series was just off, like everything else above. From what I remember (yeah it was under a month since I watched it) the sound wasn't a main part of the series overall but the voiceacting was just weird T-T

Now it's going to be fun, Creepta is just no, who in the world would think up this monstrosity...seriously. He wasn't even an interesting main character he was the reason I was considering just leaving it until the morning to watch it >_> The girls were all just plainly annoying, they were all like, nice one minute but butts the next...in that sense I feel sorry for the main but I really didn't enjoy this anime.

I wonder how people will react to this because I know that it has been highly rated by some, but I didn't enjoy it but this ends my review here xx (At least it wasn't another Rescue me!)