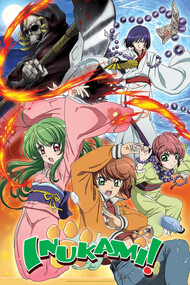 The Kawahira family specializes in dealing with troublesome spirits with the help of inukami, strong dog spirits that take human form. Members of the family are expected to make pacts with strong inukami in order to fulfill their duties, but their family has a black sheep: the perverted Keita, who charges people for his help. His inukami, Youko, is dedicated to make Keita completely hers. Her favorite form of punishment for him when he strays is teleporting him into the city completely naked. He's been arrested for indecent exposure so many times that he's a jailhouse regular, and is considered an outcast by his family and normal society; yet an inukami of the highest caliber chose to be his partner?! Is there really more to him than perverseness?

The Machos Are Licking!

Digging at the Mixed Bath!

Beg to be Exhausted!

Hear my Song of Death!

Entertaining to the end! It was a laugh from start to finish with a few serious moments to calm yourself down, but still....you can't not look at the elephants!Characters: Youko and Keita are just this weird couple in a way (that's how I thought of them). Keita met Youko at first in her fox form when he was just a little kid (and even then he was a pervert). Youko isn't really an inukami, she's just pretending to be one in order to stay with Keita. The Kawahira family are the masters of the inukami of the mountain, Kaoru (Keita's older and much more of a gentlemen brother) has 10 inukamis all committed to him body, mind and soul (something Keita wishes to have in order to fulfill his perverted and sexual fantasies). I can't really name all the inukami Kaoru-sama has, but I do know (in my point of view) the main ones: Sendan is a bit of the controlling and the mother to all the others, Tomohane is the little kid of the family and just a bundle of joy with the cutest disposition, Nadeshiko (I think) is married to Kaoru or should be married to him. All the others just make up your typical family (except they have tails and powers and are seriouly over protective of the "dad").Story: It's just a bunch of craziness, perverts and weirdos that combine in a sequence of events. The characters are always so important and always play a part in the story, okay. Youko isn't really an inukami right? Well! Her dad is just the worse......villain? demon? spirit? in the story (but they make it seem like he's the worse in the world). Strange stuff has been happening in the city where this couple lives and it just leads up to the release of Dai Youko, Youko's father, and the characters that appear before his release really know how to make a day special. Sekidosai is a wizard or magician who had a fight with Dai Youko 300 hundred years ago! Now they're fighting again with everyone caught into the middle!And everyone was just so happy before this happened, but then a whole bunch of crazy mixed up stuff start happening with the characters. Sekidosai turns out to be an evil wizard from Kaoru's past who feeds on other people's despair. Dai Youko appears to have been watching his daughter very closely with a dairy filled with pictures and notes about his daughter. Kaoru is living inside a fake body which disappears after a while, but it wasn't his choice, the evil wizard living inside of Sekidosai put Kaoru's spirit inside that body and only he can put it back.Okay, I've said way too many spoilers now, but overall it was very very entertaining. Gomenasai about the spoilers, but I will tell you one more thing: You would not expect such an ending coming from such a perverted show.

If you've seen my review before, you know I hate giving long reviews. So let's just get this over with. The plot is about a lineage that exterminates evil spirits and demons with the help of creatures known as Inukami. Keita, our good ol' perv, along with his bitch, Youko (Oh my, an actual pun with that word!) are the the latest ones in the lineage. I found myself laughing to the gayness of the anime and the consant and clever references to other anime. I believe everyone who watched the first episode was blown away with its unique... uh... taste. The story isn't one single mission or event, but rather somewhat like Naruto where Keita accepts a mission, completes it, then proceeds on to the next one. The animation is clean. Though it is not to the point where it is jaw-dropping, it does a pretty nice job. Also worth noting was the constant elephants (yeah, I have a thing for those type of stuff) drawn with crayons. The soundtracks and seiyuu also deliver an exceptional job. Personally I liked the OP. Now, the highlight of this anime is the abundance of unique, interesting characters. Kaoru, Keita's cousin, owns 10 inukami, which means 10 times the fun! Every Inukami has her/his own personality so it doesn't feel like you're watching 2 of the same characters. My favorite was definitely Keita and Sekidosai, whom both are pervs. Keita knows how to do his job by keeping the audience entertained  and Sekidosai... well, he's amusing. I mean, he's the antagonist and he says stuff like "Why do humans wear clothes? Even monkeys don't wear them. We should all take off our clothes and return to the true nature of this world!" And the fact fact that he's gay (the actual meaning) adds to his unique character. Also, he has a robot with a dick drill... -_- Overall this anime was worth watching. I just accidentally stumbled upon it one day and watched the whole thing in two days. That was how addicting it was. 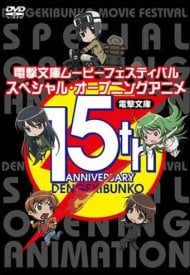 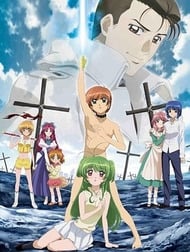 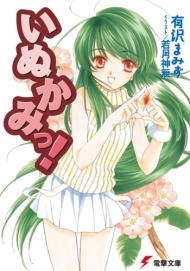 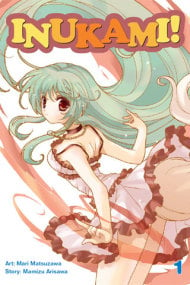