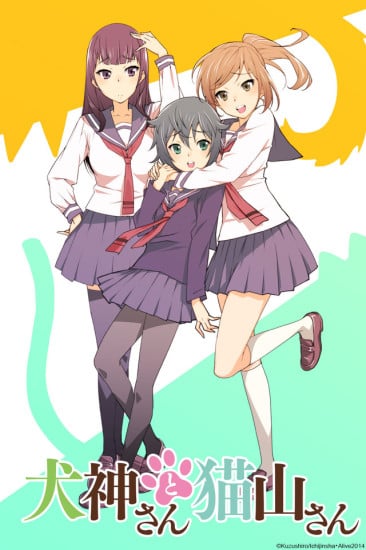 Inugami-san, Nekoyama-san, and a Day Off

Inugami-san and a Lovers' Quarrel

Nekoyama-san and the Sick Day

Inugami-san, Nekoyama-san, and the Summer Festival

Anime-Planet users recommend these anime for fans of Inugami-san to Nekoyama-san. All available to watch right here, right now!

It's the first day of middle school for Akari, and the enthusiastic girl is determined to reinvent her personality and have tons of fun in the process. Along with her friends, mischievous Kyouko, serious Yui, and adorable Chinatsu, the girl joins the Amusement Club, a group for students who just want to hang out and joke around! Over the year, the girls...

Kanaka, Saki and Ayuko are three girls who, as fate would have it, meet each other just before starting high school. Kanaka accidentally bumps into Ayuko, ruining the girl's ice cream cone, and their friendship soon follows! Together, the trio navigates high school life, whether giving each other nicknames, racing each other to class, or just having...